Hobbit, The: An Unexpected Journey - The Mystery Cut

Brief Synopsis:
The Arkenstone Edition by Kerr with Chris Hartwell's mystery angle and some added dwarf moments.
Intention:
I lovingly based this edit from Kerr's Arkenstone Edition and had no intention to replace it. If I ever did that I would include as much of the dwarves personalities from the Extended Edition (little scenes showcasing them) without taking too much of the runtime. But I never felt the need to... Until Chris Hartwell made his own edits of the trilogy which were a revelation to me. So I took from Hartwell's playbook and mimiced his edits, added my personal favorite dwarf moments I missed in the Arkenstone Edition, and made the MYSTERY CUT.
Other Sources:
The Hobbit: An Unexpected Journey - Extended Edition
The Hobbit: An Unexpected Journey - Arkenstone Edition by Kerr
Special Thanks:
To Kerr for creating his amazing Arkenstone Edition, and for Chris Hartwell for being such a good sport and bringing something new to the table by taking the morgul blade out of it (lol).
Release Information:
Digital
Special Features
Available in 720p 4 GB, 1080p 7GB, and 1080p 19GB, all in MP4.
Editing Details:
Just like Chris Hartwell, I made the Necromancer story as much of a mystery as possible by removing Radagast actually going to Dol Guldur and bringing back a Morgul Blade. Now when Radagast appears, he only goes to Gandalf regarding his concerns regarding the spiders spawning from Dol Guldur that are infecting the Greenwood. Now the White Council discussing the darkness in the woods, which has been called long, monotonous, and pace-breaking by many, has instead become quick, mysterious, and interesting. Now their discussion, without Gandalf bringing solid proof, brings doubt to his worries and does not take away as much from the main plot of the first movie. Therefore the White Council scene is much more involving and attractive, rather than arguing something we already know is true.
Cuts and Additions:
The edit is based on the Arkenstone Edition. If you want to see what was changed, look at that listing. Further changes I made over the Arkenstone Edition are below:
+Added Bifur's line and Bilbo and Oin's subsequent exchange regarding the axe in his head from the Extended Edition.
+Reinstated Bombur getting huge cheeseblocks and Bofur saying "he eats it by the block".
+Reinstated Bofur throwing Bombur an egg and his catching it with his mouth. I've always loved this moment, especially after learning Stephen Hunter miraculously did that in one take. This cast is just so charming and wonderful :D
+Reinstated Thorin's rousing speech to "take back Erebor" as I always liked and missed that scene in the Arkenstone Edition; this time though the dwarves argument comes after Balin implying they're not the brightest bunch. This edit required me to bring the planning scene back to its original structure, although I didn't add back any of Kerr's cuts besides Thorin's speech so it's still shorter than the theatrical/extended cuts.
*When Radagast appears, instead of Radagast visiting Dol Guldur (which never happens in this version) we quickly flashback to an earlier scene that was cut with Radagast discovering dead plants and animals in the Greenwood and the spiders that caused it. It is much shorter though, with the huge section of him healing a hedgehog in his house still cut.
*Radagast never gives Gandalf the morgul blade. When we return from the flashback, Gandalf gives Radagast some old toby, and then we hear warg howls.
+Added Kili flirting with the elf playing the harp in Rivendell, and the subsequent joke with the dwarves laughing at him.
*The White Council scene has been re-edited to mimic how Chris Hartwell did it, save for some different shots of Galadriel to make her location consistent. Like Hartwell did, I masked out the Morgul Blade from the scene and made the scene much tighter and more mysterious, with the added bonus of the company of dwarves being part of Gandalf's plan because of his worries (which it already was, but it is much more emphasized here and makes the plot much more focused).
*Regraded the treasure room at the end to make it look more like how it looks in the sequel (much darker with a green tint). I masked Smaug's eye so it still shines.
Cover art by Masirimso17 (DOWNLOAD HERE) 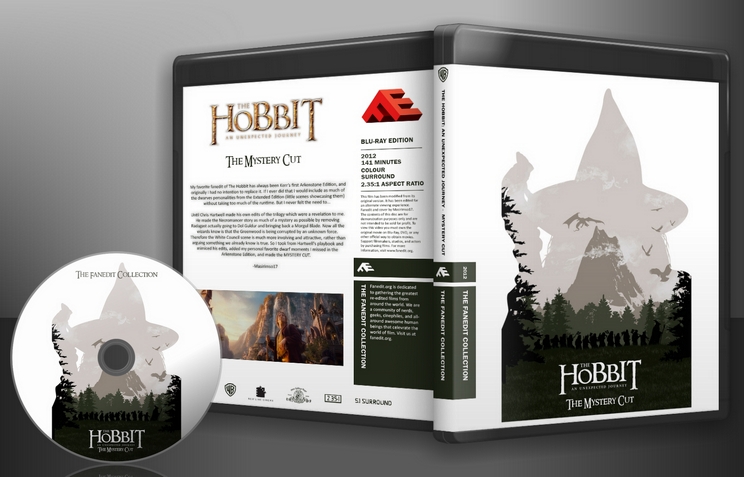