Brief Synopsis:
This removes almost all drama scenes from the original movie to present you a true crime movie. The audience can also choose their preferred ending.
Intention:
When I watched Yoshimi’s Action Edit of “HEAT”, I was intrigued, because what I remembered as a total bore (I know this movie has lots of fans, but not me, sorry), was suddenly thrilling, suspenseful, interesting. The overall quality of the edit was bad, the picture was very grainy and several cuts were not executed well AND I didn’t like the ending nor the most important scene of the movie, when Pacino and De Niro meet, because it feels hollow and empty to me. So I decided to once again go solo and create a fanedit project all by myself in redoing another already made fanedit. This time just in my way and I hope you will like it. 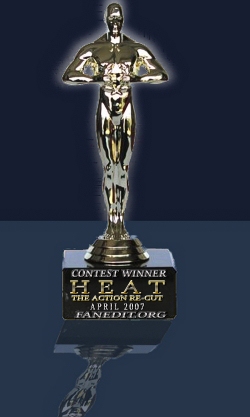 Release Information:
DVD
Editing Details:
Like Yoshimi I deleted all reference to Hanna’s (Pacino) family, to get rid of this drama which lasts longer than 30 minutes overall. Some of these scenes were great, but still they made no sense in my movie. If I leave out some reference, then the consequence is to keep on going that way. Always stick to the road you are on. If I could I would have deleted Diane Venora’s name from the credits, but that was not possible in a way I felt acceptable. But I was able to remove Natalie Portman. I also greatly reduced the part of Chris Shiherlis’ (Kilmer) wife (Ashley Judd), she has no affair, she is his loving wife, so she does not betray him in the end. Keeping the scene where she refuses to betray Chris was kind of difficult, because she is brought to the safe house by her affair, but with a few cuts I just turned him into a cop, or at least the audience is sure, he is one.
Then there was this dragging scene, where De Niro and Pacino meet. But this scene was so empty. “I will not hesitate killing you, if I have to.” “I will not hesitate either.” blabla. This had to go, but with this the later on scene was a bit tricky, when Hanna talks about it.
Finally I wanted a new ending, because I thought the original one was too long and way to unprofessional for McCauley’s (De Niro) strong, logical and thinking character. So I created my own ending, which feels to me very FRENCH CONNECTION like. I really like my new ending, it works very well with the images, the text and the music. Still I had second thoughts, if everybody will agree with me, so I tried something new: give the audience a chance to decide for themselves. So I edited the original ending again, fitting to my movie, but with the original outcome. And from the main menu the one with the remote in his hands can decide, which version he wants to watch. This was a lot of work, because this seamless branching thing is a little bit more complicated than I thought it would be.But in the end this is exactly the “HEAT” movie which I would love to watch again.
Cuts and Additions:
- removed family scenes of Hanna (Pacino) (distracting and dragging)
- removed family scenes of Shiherlis (Kilmer) (distracting)
- removed Hanna talking to Albert (nice scene, nut unnecessary and a bit overacted by Pacino)
- removed Shiherlis sleeping at McCauley’s (DeNiro) place, relationship and burglary talks (distracting and long and necessary because of the previous removals)
- removed McCauley spying on Shiherlis wife (Judd) (their relationship problems don’t matter in this version)
- removed Hanna arriving at the discotheque (too long)
- left in the restaurant scene, where the gang meets, we finally get to see the families of them all (the scene is needed later on)
- removed Hanna ,his collegues and families in the bar (we are concentrating on the burglars)
- removed Hanna returning to his wife in the bar (the scene is great but it just does not fit to this edition)
- removed Breedan talking to his wife in the bar (too much detail for a supporting role)
- removed Hanna picking up his daughter (Portman) (unnecessary)
- removed Hanna in Las Vegas dealing with Marciano (Shiherlis wife has no affair in my edition, so this part just makes no sense
- removed Hanna talking to McCauley (essential removal for our edit. This meeting was supposed to be so great and it was oh so boring.)
- heavily cut the “they dumped our surveillance” scene to remove all referrals to scenes I removed
- removed Eady and Charlene Shiherlis packing
- cut wives of Cheritto (Sizemore) and Breedan (Haysbert) watching in the TV about the deaths of their husbands (Breedan’s wife was cut before, the scene was too short for Cheritto’s wife alone)
- a bit tricky: I made Allen a policemen, guiding Charlene into the safehouse:
- removed Charlene’s surprised gasp, when she discovers the cops
- removed Charlene and Allen arguing
- had to unfortunately keep Drucker say : “well, he is right, if you want out, that is out.” to cut that would have resulted in a bad looking cut. So it is better to assume someone said that before when we were not watching.
- removed splitting scenes of Hanna and his wife (strong scene, but not suitable for my edition)
- removed Allen from motivating Charlene to show herself. (Now that he is a policeman, it does not fit for him to be so emotionally involved, so he is just sitting there.)
- removed Hanna kicking the TV (there is no TV set in my edition)
- removed Hanna saving his suicidal daughter (she is not part of my edition at all)
and now for the custom finale:
- removed McCauley taking the bait, he does turn around to kill Waingro. He really is a pro, he knows, when something is wrong and he escapes
- added glow effect to black&white still picture with text for McCauley’s escape, Hanna’s career ending and Shiherlis’ death
- removed all Hanna scenes from McCauley killing Waingro
- removed the phone call as room service (this was the setup from before, it cannot be the same hotel or room)
- removed all security for Waingro
- added glow effect to b&w still picture with text for Waingro’s death.
- added music from SAW2 “Last I Heard”, fading into “HEAT” theme
- added new end credits 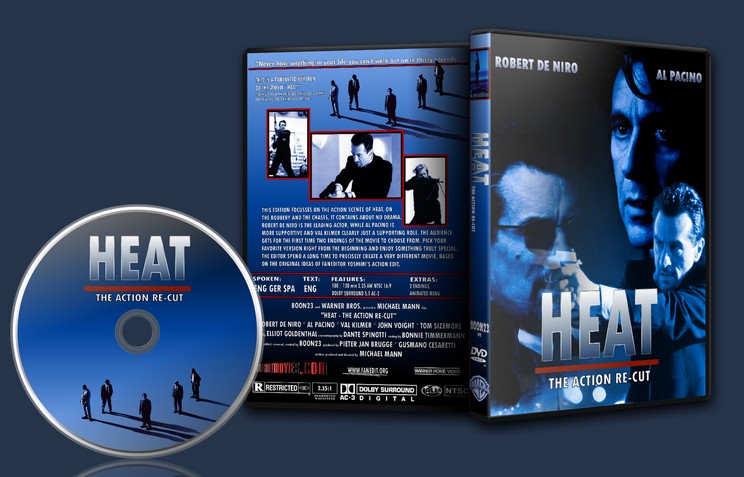 7 reviews
9-10 stars
43%
7-9 stars
57%
5-7 stars
0%
3-5 stars
0%
1-3 stars
0%
Overall rating
8.6
Audio/Video Quality
8.0(1)
Visual Editing
10.0(2)
Audio Editing
10.0(2)
Narrative
8.0(1)
Enjoyment
8.3(7)
Already have an account? Log in now or Create an account
View all user reviews View most helpful
November 05, 2013
Overall rating
7.9
Audio/Video Quality
8.0
Visual Editing
10.0
Audio Editing
10.0
Narrative
8.0
Enjoyment
7.0
I had avoided watching this edit for a while because I love Heat so much. Every time I watch it I’m enthralled. I don’t care about the runtime and I get sucked into the world. Why would I want to see an action movie that “contains about no drama” when I can just watch good ole Heat? I decided to give it a go and I was semi-surprised by the results. In no way is this fanedit superior to Heat (opinion) but the condensed version works pretty well. It’s kind of like watching a higher budget “LA Takedown” with a better script. But I found myself getting bored easily, I guess I just like drama.

I watched the “lives” ending... I really hate title cards that tie up all the loose ends. I watched “dies” on it’s own and highly recommend that ending.

The editing was fantastic, I couldn’t tell where anything was cut. It’s an older fanedit DVD so don’t expect HD quality.

If you don’t want to watch a 3 hour crime epic and you prefer a taut 2 hour crime thriller check this one out.

*This rating was given before reviews were required*
A
adabisi Top 10 Reviewer 134 reviews
Report this review Comments (0) | Was this review helpful? 0 0
View all user reviews