Brief Synopsis:
This mixes the best elements of the theatrical version with the ones from the unrated edition for what could have been the best Die Hard movie ever.
Intention:
To mix together my preferred elements from each of the released versions.
Release Information:
Cuts and Additions:
Note: Unrated Version used as a base for the edit.

Color corrected entire film. Took out as much of the green tint as possible, and moved skin tones closer to red than yellow. The result isn’t perfect, but it was the best I could manage.
New title card.
Reversed shot of guy choking McClane, hanging out of car. The original shot made it look as though McClane was backing up, not driving forwards.
Re-instated Gabriel’s “Timex watch in a digital age” line from PG13 version.
When McClane is about to leap from the speeding car, swapped out “bad fucking idea” for the PG13 version of the line. The Unrated one is an obvious loop that does not match.
Re-instated “I was out of bullets” line from PG13. The alternate line seems very cumbersome and not particularly “McClane-esque”.
Re-instated PG13 version of guard being shot. The blood that spatters onto the car is an obvious add-in, not to mention it is not on the car in any other shots.
Removed scene of McClane and Matt stealing the BMW.
When driving to West Virginia, removed reference to the car theft.
Removed McClane’s line, “Fuck being a hero” and re-instated longer shot of McClane not speaking. The line is looped, and badly slotted in where there’s no real 'space' for an extra line.
After Mai kills the plant guard, swapped out bloody consoles for clean ones. (Later shots feature clean monitors, so this edit was purely for continuity.)
Removed badly looped “Motherfucker!” when McClane is being shot at in elevator shaft. He doesn’t mouth any words at all, let alone yell profanities.
Removed badly looped “Fuck you, bitch!” line. It doesn’t fit, and detracts from McClane’s triumphant yelling a moment later.
Removed entire scene of Matt’s badly looped, badly edited whining, (after the plant explodes) and slightly rearranged the sequence of power going out across the country. Now, McClane hasn’t just been standing in the one spot for minutes on end for no reason.
Removed flight to WAR10CK’s house. Not only is it completely unnecessary, it helps to make it look like McClane and Matt don’t just steal the Kaludis’ car when they leave the house. Now it’s just the car that they arrived in. (I’m pretending that the BMW was destroyed when the power plant went boom.)
Switched out McClane’s insult of “Hey, Jenny Craig” for “Hey, Dump Truck”
When McClane is being “very impressed with himself” on the net, re-instated reaction shot of Gabriel that was removed from the Unrated for reasons I can’t fathom.
Used theatrical version of Gabriel’s IT-guy executions to remove crummy CG blood.
Removed McClane’s line “Gotta get a gun. Keep your eyes open.”
Removed McClane picking up the wrench that soon disappears. Even Len Wiseman himself jokes about this on the commentary. Why they left it in is anyone’s guess.
Removed “Did I get a 'Thank you, no I got a 'Fuck you'” I did not use the PG13 version either, (“Crucified.”) as both are as badly looped as each other.
Replaced McClane’s “Fuck you” with “Bullshit”.
Replaced “I’m on my way to bring you a big fuckin’ cheque” with “Sit tight, I got a cheque for you.” (Felt more natural to me, the alternate seems too self-consciously 'R rated')
When McClane enters the refrigerated area, mirror-imaged the shot of Rand below to be right way ’round. They clearly did it to preserve visual continuity, but I actually feel it works better having him directly under McClane, otherwise, McClane should see him too. (Plus, there’s writing on the pipes which draws the eye when they are flipped.)
Removed “Might wanna think about what to put on your headstone, asshole” â€” Badly looped, and a crap line. Now, McClane raises the radio to his mouth, but is shot at before he gets a chance to speak.
When McClane commandeers the semi, removed him looking around the cab and seeing the CB radio.
Removed McClane using WAR10CK to patch through to FBI. No need for it at all. The next line we hear, “This is Central. We have a patch for Director Bowman.” Tells us all we need to know. Taking the scene out also removes some terrible continuity with the damage to the truck.
Removed F35 firing the first missile at truck, and freeway collapsing. It just seems too sudden, out of nowhere. The first attack is now as it swoops in front of the truck. This way, the attack escalates, bullets, then missiles.
Replaced McClane being shot by Gabriel with the PG13 version. The blood in the Unrated is very poorly added.
Several other extremely minor edits which don’t really bear listing. 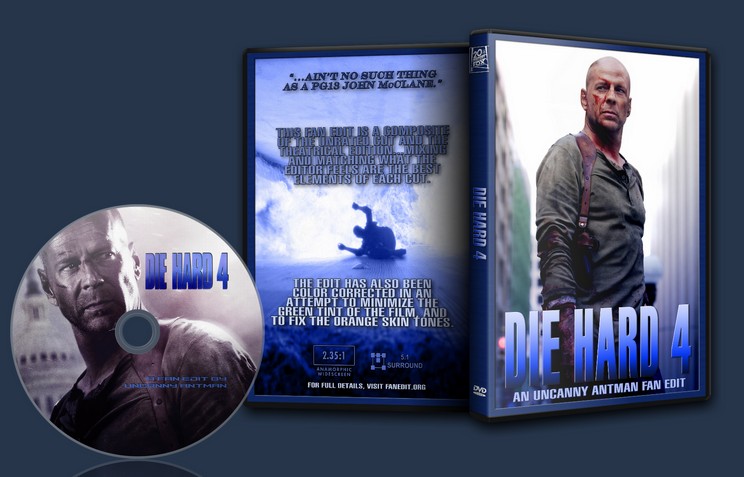 This is a very interesting film to fanedit, because it is an unusual mix of some really good moments and really bad moments.

Uncanny Antman has done well with the color correction and made some good edits. Unfortunately for this critical viewer, his edits don’t go far enough. I fear that there wouldn’t be enough left to tell the story if Uncanny Antman had cut all the absurd crap from this movie, but there are definitely some scenes such as the power plant scene that could have greatly benefited from deeper cuts.

Although Die Hard 4 was directed by Len Wiseman, it feels very much like a Michael Bay film with the same sub-critical intelligence level and over-the-top action. If you like Michael Bay films you will probably enjoy this. If you don’t, you won’t.

To put it another way, if you enjoyed the original version of this movie, you will enjoy this version as well. If you didn’t… well, see previous paragraph.

[b]Fanedit rating of 7/10.[/b]
(Fanedit rating focuses on technical and creative criteria that pertain specifically to the scope and depth of changes made from the source material by the faneditor. In other words, I might hate the movie but still give a high fanedit rating if I really respect the re-editing work done to it.)

Watched this with my wife. She likes the earlier Die Hard movies, the third one more than the second. I didn’t tell her that we were about to see an edit, and I don’t think she noticed it being re-cut at all.

I for one always enjoyed Live Free or Die Hard, but definitely agree that it was not a “true” Die Hard film. Your edit fixes almost all the problems with the film and makes it even better. I was truly glued to the screen on this edit!