This week we have a single new fanedit, a take on a sequel of a classic. 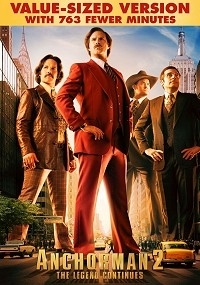 Crafted using a mixture of the Theatrical, Unrated, Super-Sized Version, and blu-ray supplemental material, the aim of this edit was to create a funnier, tighter film worthy of being a successor to the first Anchorman. Entire subplots have been removed, and jokes have been pulled from all commercially available material, resulting in a much more focused film and, in my opinion at least, a much funnier one as well.