War Horse: Out of the Trenches

Brief Synopsis:
This isn't a heavy edit, it's mostly a restructure. The 10-minute 'Second Battle of the Somme' sequence, which occurs 3/4 of the way through and does not feature Joey, derails the movie. So the Somme sequence is shifted to the start, to form a new flashback/prologue and is now in black & white with an added old-fashioned vignette, further separating it visually from the main body of the movie, suggesting something of the past about it and creating a contrast with the vibrant colourful countryside of the first Devon scenes. The fact that the Somme sequence already featured no score, unlike the lushly orchestrated John Williams scenes that follow it, was a bonus distancing factor. We will now not really see Albert again until the end of the film, just a brief glimpse of his face, lit by the guns that Joey is dragging, only informing us that Albert has joined up. The 2-minute cutaway back to Albert in England disrupted the otherwise entirely Joey focused narrative, so that is simply deleted. There are a few more minor cuts to massage the new continuity and to slightly delay certain aspects of the story. On-screen chapter titles are added (in the same style and font as the existing time/place titles), acknowledging the episodic nature of the story and who owns, or cares for Joey in those episodes. 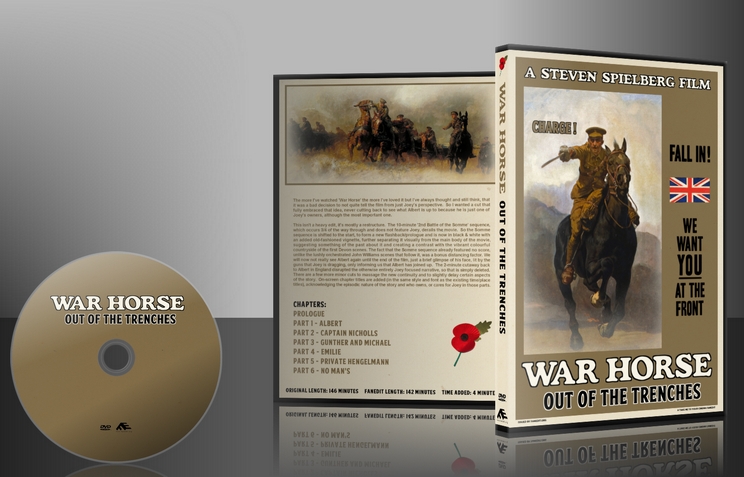