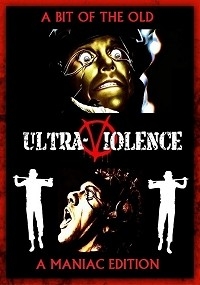 Join the Forum Discussion
Tweet
Brief Synopsis:
A much more violent project of Clockwork Orange cut to 88 minutes (Theatrical cut). Faster and stronger in violence.
Intention:
The Intention was to make a Ultra Violence cut of Clockwork Orange. The added scenes are from other (horror) films to create something new of this masterpiece. Alex Delarge is confronted in this cut with his own madness: The Ultra Violence.
Other Sources:
The New York Ripper
Caligula
Suspiria
Hostel II
Maniac (2012 remake)
Tenebrae
Day of the Woman
Irreversible
Saving Private Ryan
Triumph of the Will
Memory of the Camps
Release Information
MP4/M4V/MOV
Cuts and Additions:
- New Credits (longer in the uncut edition and i used a different font)
- Beating up the drifter is trimmed in dialogue (voice over is cut)
- Driving to Alexander's house is a little trimmed
- Alex in his room imagining violent things with the Beethoven track is (of course) replaced with other stuff
- Conversation between his parents is cut
- Alex walking in a store is cut, also banging the two hookers is cut
- Conversation between Alex and his "droogs" about the new way is trimmed
- Slow motion scene after that is a little trimmed with another music overdub (replaced)
- Bar scene after that is a little trimmed
- The dialogue at the police station is trimmed
- In the prison with the library scene we see Alex once again imagining violent stuff and of course this is replaced by me with other footage. That footage is UNCUT in the unrated version but trimmed in the "theatrical" cut
- Alex watching the violent stuff is replaced with other stuff
- The so-called stage act is trimmed
- Back to his parents the dialogue is trimmed
- Meeting the drifter ones again is overdubbed with other music
- The "policemen" is cut in that scene, he is beating up by the drifters
- Back to his old friend mister Alexander the dialogue is a little trimmed
- Bathtub scene starting singing in the rain is in duet with good old Gene Kelly
- Alexander telling some friends about Alex is cut. He only mentioned it to Alex at the dinner scene
- The dialogue with Alexander's friends is trimmed
- Some voice overs of Alex are cut
- Alternative ending
- This theatrical cut has the inserts in color, the unrated cut black and white

I should probably preface this review by saying that 'A Clockwork Orange' is my favorite film of all-time. I think this edit misses the point of the entire film, for me.

Maniac often shortens up classics to put the violence or action on top. A lot of times I think this serves the film just fine (Assault on Precinct 13, The Shinging, Escape from NY) however this time the entire purpose of the film is excised, in my opinion, and a bunch of narrative holes are opened up. For starters, I'm cool with (actually thoroughly enjoy) movie violence with a purpose. A lot of the added scenes in this felt designed to shock, but not with a lot of rhyme or reason. They actually detracted from the film working as well as it could have. For instance, when Alex undergoes the Ludovico Technique, 85% of the scenes are from other movies. That alone is fine, it could even be cool, but the scores are from the films themselves mostly. The pint is, there's no Beethoven until the very end of the treatment. But the entire point is the Beethoven, so this did not work for me. Instead of a twisted scene wrapping Beethoven up with a sick feeling in Alex's mind, we're left with him watching a ton of rape scenes with different music. Then on the last day, he hears some Beethoven and complains. Also, the dramatic beat and the "First Day," "Two Years Later," "Second Day", etc, all of them, didn't feel like a Kubrick film. I think the Ludovico scene would work best without the title cards, edited as it is in the "theatrical" version of this edit. The Caligula footage was inserted at a time that made sense, and was the footage that I thought would have worked the best. However, in the unrated cut the footage goes on for a full four minutes with most of it just graphic porn. I get it, but it's not helping the movie. I'm no prude, it just slows down the narrative and makes the viewer wonder if they're going to show the whole thing (they are).

Musically, "Singing' in the Rain" is used as a more universal theme now. That is an interesting choice but it didn't work for me. It's used during the writer's wife rape scene as in the theatrical, but now also it's overdubbed when Alex attacks his droogs. Then it's overdubbed while he's singing it in the writer's house (but not in sync which was frustrating), and again at the end. So in this edit, it's more of a theme of violence as a whole. I preferred it when it was clearly the reason for Alex's recognition at the end.

Most confusingly, the three most important scenes to this entire movie are all gone here. The part of the demonstration with the naked woman is completely removed. What??????? That is the only time nudity is used in its proper context, and it's very powerful given that we've seen Alex pillage and lust throughout the whole film. Without this part, everything earlier just feels gratuitous. Then the part about Alex's mates having grown up and become cops is cut. This is baffling. That's like the entire point of the whole narrative coming together in that part. I agree with Stanely Kubrick that the last chapter of the book is unnecessary, but removing it all renders it kind of meaningless. Alex commits suicide in this one. I suppose at that point, it had felt as if a lot of violence was put in, important character scenes were all cut, and I figured it would end with his death.

Prior to that, there is the scene where Alex comes home. But all the previous stuff with his parents was cut so there is no emotional weight to him coming home finding his room rented out. Also, the hobos are kicking his ass in an urban tunnel and in this cut he is just randomly wandering and finds the same writer's house. It's even more unbelievable in this. It's kind of unrealistic in the theatrical cut but the cops/droogs take him out to the country a bit so at least it makes a little bit of sense.

I may be too close to the source material here but the entire essence of the film is the cyclical nature of life and how we can/must choose to break the cycle. In this edit, there's just a lot of twisted, violent shit added but Alex doesn't even have an arc. I was extremely uncomfortable with some of the added footage in the uncut footage. I don't actually mind anything with a purpose but it just felt like a lot of gratuitous rape, to be honest. With the new ending and cutting every redeeming arc, it made all the added stuff feel slight in hindsight. It didn't have a narrative point. It makes it very nihilistic, which may be the point but I have no interest in revisiting.

On the plus side, the editing was invisible and I enjoyed a lot of the musical cue work outside of the "Singin' in the Rain." There were lots of bits played with. I actually loved the musical side of the Ludovico Technique if it weren't for the video and the fact that so much non-Beethoven hurts the film, in my opinion.

Maniac's Ultra Violence - NO SPOILER
I was so curious about the uncut version of Ultra Violence, that I almost had to have a sleepless night.
Who dares to make a recut of "A Clockwork Orange".
Who else but, Maniac !
I have to say that I've looked at an amazing experience.
An amazing experience that will be remembered for a long time.
A very original cut of Kubrick's masterpiece.
This must have been a lot of work. Maniac plays with difficult scenes and classical music.
Maniac has apparantly no problems with that.
Don't expact any brave version of ACO but a rock hard implementation.
I know ACO from front to back, left to right, top to bottom. I have greatly entertained with this new version.
I mention some highlights;
Reverse scene, a supporting role by a infamous German, lots of difficult cuts, great editing of music, new music tracks added, sound effects added and very very original new scenes added.
Maniac shows us that violence is pointless, that's why I keep the cheerful song Singin' .......in the Rain.
A masterpiece, a superlative.
Definitely a must see !!!!!
Audio 10+ Video 10+

Do you recommend this edit?
Yes
Format Watched?
MP4/AVI/etc. (HD)
Comments (0)
Was this review helpful to you?
Fanedit.org does not host, provide links to, or sell fanedits. Do NOT contact us for such things. For more information please read our FAQ.
close
Toogle Down