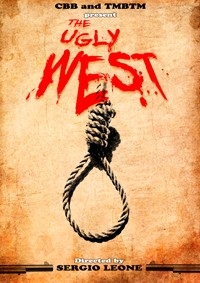 When I first read about this project I was filled with both excitement and intrepidation.
Not only are these two movies iconic legendary Westerns,
they are also personal favorites which I have viewed dozens of times over the years.

Thus, I was very curious what these two master fan editors could accomplish
and what my reaction would be to two movie I pretty much consider “perfect”.

So enough of my rambling, lets get to the heart of it.
WARNING! There may be SPOILERS in my review.

First off, the DVD Menu design is fantastic. Perfect in tone for these two Spagetti Westerns.
It is on par with any professionally produced dvd I have ever seen.
Well done.

The Bonus Features were all very nice. A mix of trailers, behind the scenes and About This Edit info.
The Blue Yoda feature was really cool, clearly demostrating the power of music in movies.
All in all, very enjoyable.

On to the main features….

The editting removal of Jason Robards is sheer brilliance. TMBM has cleanly excised the Cheyanne character from the movie, and the narrative does not seem to suffer too much from it. This an example of very talented and skilled editting. TMBM should be proud of this feat.

The reorganizing of the opening scenes works pretty well. Though having the McBain boy come running out after Frank and his men emerge seemed odd to me. Would he have not heard all the gunfire and peeked out the door earlier?

The newly restructured Train Station shoot out works well, though cutting immediately from the gunfight to gorgous Claudia Cardinale at another Train Station had me confused for a brief second. Was she at the same station? Did she see the gunfight? I almost thought an establishing shot would have been good there.

The new music when Cardinale views the McBain bodies is absolutely beautiful and greatly enhanced the scene. Great pick TMTM!!!
Though I think the lyric subtitles were an unnecessary distraction. The emotion in the singer’s voice carries the moment, I don’t think the audience needs the english translation. But the audio work here is excellent.

The narrative progresses nicely throughout, the cuts are all clean and transitions are smooth. Though I think through the editting process, Claudia Cardinale’s character now comes across as unsympathic and some what ill defined, and perhaps that was the intention. But some her best moments were definitely lost in this version, which is too bad.

The recut final showdown was well done. Clever use of Cardinale’s reaction shots to Robards inserted here, though it was the only time the cut felt somewhat “forced” to me. I do like the implications of this version. Again well done.

So on a technical level, I would score everything high 9′s and 10′s. Clearly the work of an editor at the top of his craft.

An edit by the legendary Boone is always a pleasure to watch. His creative choices in this edit are bold and innovative.
If you watch this edit for no other reason, watch it for the Audio Editting.
It is a technical masterpiece in terms of removing dialogue and background music, and then adding new music and sound f/x!
In fact, make certain you watch Boone’s bonus featurette on Inserting Johnny Cash,
it is an eye opener and entertaining. So a solid 10 for audio editing.

The removal of Lee Van Cleef from the storyline is perfect.
You would never known he had existed if you had not seen the movie before.
And like TMBM all other cuts are clean and smooth. Again, pefect 10 for technical editting.

Now on to the big issue, the Johnny Cash music!

First off, I must tip my hat to Boone to have the creative courage to edit out one of the most famous movie scores in cinema history!!!

But does it work?

The Ennio Morricone music in TGTB&TU is pivotal to the longevity and appeal of this movie. It is both a main character and the unseen narrator to the story. Thus, if you are going to remove it, you better replace it with something of equal weight and power.

And Johnny Cash definitely as both those qualities in spades. But does it fit the movie?

Honestly, for me, it was very hit and miss. I enjoying the opening, and the music while Eastwood and Wallace are pulling their Hangman Scam and even the music during the desert was clever. But once we arrive at the Civil War battlefield, the music felt forced and heavy handed, and the music completely did not work for me during the cemetary scenes.

But this may be in part because the original soundtrack is so ingrained into my brain that I am having a hard time seperating the fan edit from the original. An interesting side note, I watched TWO GLORIOUS BASTARDS with my daughter who has never watched the original movie and even she commented several times about the music about how much she liked it. So there there you go, two very different reactions.

But on an entertainment level, how well do they work?

Interestingly, I always found Sergio Leone’s two big epic westerns to be a tad long. But now, after watching these two truncated versions, it gave me a better appreciation for his genius as a storyteller. His command over subtle character traits and long silences are the stuff of legend. And I found myself missing these elements in these new versions. Again, I may be having great difficulty seperating my love for the originals.

Do these new narratives work? Absolutely!!!

They are expertly crafted with a definitive beginning, middle and ending. I found them enjoyable and I am very happy I took the opportunity to watch them. But are they my preferred version? No, of course not. But the editors made it very clear, these edits are not meant to be improvements or replacements. But they are a wonderful showcase of what fan editting is capable of and what we can all aspire to.

So do yourself a favour, and check out THE UGLY WEST,
you won’t be disappointed.

If I had to give a final overall score: