Brief Synopsis:
Removes most of the over the top, silly sequences and dialogue of the film, and tightens the story up overall.
Intention:
At the time I was fully entrenched in originaltrilogy.com and seeing the possibilities of editing films that had a good intention, but had some bad humor/dialogue/action intended to sell the movie to a wider (dumber) demographic. While sitting in the theater my mind instantly started seeing what could be cut and moved around to make it better, and I knew I had to do it for myself, to be able to enjoy the movie on repeat viewings.

I didn't cut all of the humor out, as some people like it, and I had software and hardware restrictions at the time I created this. There will be a second, more intense cut following this one.
Other Sources:
I used some sounds from the original animated series for various sound effects.
Special Thanks:
ADM
Boon23
Dark Jedi
Hal9000
Tranzor

Persons involved: 1 (plus some excellent help from a few members who are in the “Thank you” list in the DVD menu credits.
Cuts and Additions:
Trimmed end of soldiers talking. no more “what’s your favorite day or whatever.

Cut Lennox talking to his wife and kid (fart joke).

Cut first time Epps looks at Blackout with binoculars, it’s a little ludicrous to think that he would sit there so long and look at him twice.

Cut “the compass makes a great gift for columbus day”.

Cut “the man in the green car”.

Cut Mikaela’s boyfriend saying “this is not a toy, these 22′s, i don’t want you grinding them”

Cut the President saying “yeah, could you wrangle me up some ding-dongs?”. Bush is dumb jokes are so 2004.

Cut some of Frenzy’s goofiness in elevator.

Cut “should I be? Yes you should! etc….” These people are supposed to be “the top of their class”.

Cut Maggie saying “there is nothing on earth that complex" (obvious).

Cut Maggie saying “what about an organism?…………..dna based computer, and I-I-I-I-I know that sounds crazy…”

Cut some of the indian phone guy (trimmed pause at start, cut “i’m going to ask you to speak….). True story, but a little bit stretched out.

Cut Epps saying “bring the rain” , shifted audio to cut mouth movement. I’ve talked to several people I know from the military, and they all told me the would never talk like that on the radio.

Cut Maggie saying “there’s only one hacker in the world who can decode this signal”. rearranged video to cut this scene.

Cut Glen’s grandma saying “are you playin them video games again, making moment of door being kicked in more dramatic.

Cut news report in Sam’s room. too much info for the network news to have on the base attack.

Cut Sam calling Miles and telling him that “satan’s camaro is stalking him”. Ha-ha.

Cut out a few frames of Sam flipping his bike over. The editing was poor, and if you looked at it, they were repeating footage, making it seem like he was in the air too long.

Cut several seconds of Sam making small talk with Mikaela after falling off bike (while being chased by his car… that was driving itself…and had turned into a robot the previous night).

Cut several seconds of Sam’s hesitation to get the f#*k away from a car that just turned into a giant f@%king evil robot….

Trimmed “this must be a bad dream” along with a few frames of transition from Sam on roof of car to Barricade slamming his fist down.

Trimmed a few frames of Barricade’s two swings at Sam (he’s a lightning fast ninja when fighting Bumblebee, but a lumbering hulk when trying to swat a human?). I also trimmed it to again make Sam look as if he is trying to get away from a GIANT F#@KING ROBOT!

Cut “the car won’t start. at least we ditched the monster, right?” keeps the tension in the car higher.

Trimmed Bumblebee’s “engine trouble”. He starts himself up and punches it at the right moment. Sam is surprised.

Trimmed Mikaela lingering and staring at the sawzall (there is a freaked out robot attacking her boyfriend after all).

Cut Sam saying “not so tough without a head, are you?”, trimmed transition.

Trimmed Sam and Mikaela drooling over Bumblebee’s interior/Bumblebee taking his time sitting in traffic inside a tunnel (while in “disguise”).

Cut “excuse me? are you the tooth fairy?"(barf)

Slightly trimmed “Scorponoks tail” scene, making it a little more of a suprise.

Cut Sam and his parents being dragged outside (you touch my dog….don’t talk to anyone until we have a lawyer…etc.).

Cut Sam saying “what you mean like ET? pfffft” I know it’s a reference to Spielberg, and it’s real cute, but Shia’s acting at that point is a little iffy.
Cut “criminals are hot!”

Trimmed Optimus slamming into Sector7 SUV for effect (to make it more of a suprise/shock).

Cut Bumblebee pissing scene. I know that the agents are wet in the scene after that, but I’m going to chalk that up to sweat.

Cut Simmons saying “they know the way of the samurai.”

Cut “ok, you want to leave the fate of the world on a kid’s Camaro?”

Merged footage of bumblebee looking around and then slamming face shield down. (it was a pain in the dick to line up video/sound spent 4 hours alone on that one 10 second scene. Eat your heart out ILM!).

Cut out Sam talking in between shots.

Cut Frenzy saying “duh/uh” when he tries breaking into the room with the crew. Trimmed scene slightly.

Cut Simmons “get out of the way…” trying to blowtorch frenzy…..frenzy shooting discs into room, Goodburger screaming about it, Keller sending message, Air Force responding.

Cut smiley, dipshit kid saying” COOOL MOM!” I worked on this longer than any other shot, and should have given up quite frankly, but god I hated it. I’m pretty proud that I got it to work.

Cut “I’ll drive, you shoot!”. It’s a weird little mix-up of cuts, that mostly works, but being my most hated line in the whole movie, it just had to be removed. I had to steal sound effects from a different battle to get this one to work. I’m pretty happy with it, considering I got to remove one of the worst lines from the movie.

Cut the “advertisement-bots”. I kind of like Mountain Dew bot, but it was impossible to cut the scene up (without rebuilding the audio track from scratch, fuck that.) to remove the other bots. I’m happy with it, and it keeps things rolling. Besides, there was some awful acting in the whole scene.

Trimmed a couple of seconds in the Allspark hand-off to try and trim the hang time, and increase the urgency. It seemed as if Sam was taking his time to get rid of this thing that giant fucking robots were chasing him for.

Left in michael bay getting flicked into a car by megatron.

Cried about not being able to cut Link Park song from the end (yet, damn it!). 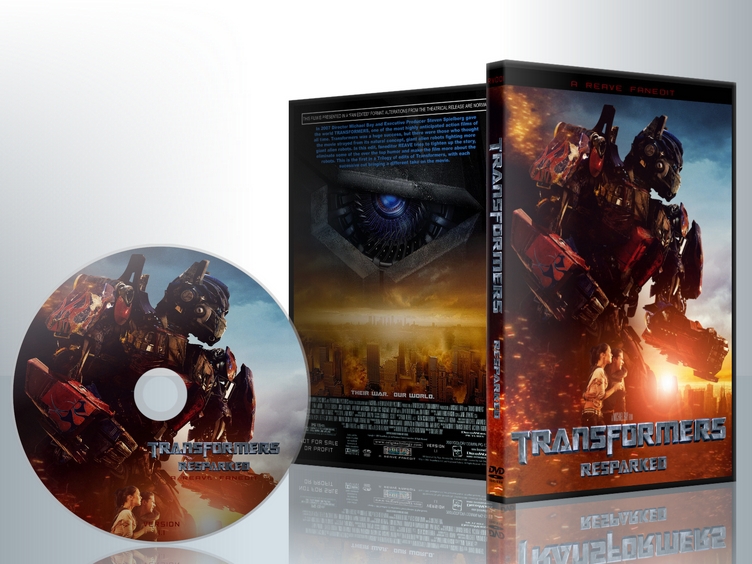 I think the first Transformers movie is great and Resparked does it's job well. It's a pretty straight-forward edit, movie less dumb now. You can't convince me it's a masterpiece though.

*This rating was given before reviews were required*
B
buddythegoon Top 500 Reviewer 18 reviews
Report this review Comments (0) | Was this review helpful? 0 0
View all user reviews