Dealership Scene:
- Removed clown’s line about his makeup melting
- Removed line from Bolivia wanting to show Sam his favorite car away from BB

Pentagon Scene:
- Removed SecDef looking at those in attendance and all comments made there

Witwicky House:
- Removed Sam going to his room, checking the mirror, ebay, etc.
- Removed bit about Mojo and his bling.

Desert Scene:
- Completely removed scene with Lennox and company talking about what happened, the binoculars and Skorponok spying.

Park Scene & Drive Home:
- Removed a few of Brent’s lines to his friends and his worrying about his wheels being grinded.
- Removed 2nd half of Sam and Mikaela’s talk in the car where she comes off as a total ditz not knowing who he is.

Air Force One Scene:
- Cut President’s Ding Dong lines.
- Remove a lot of analysts lines (i.e. “Are you running a diagnostic?” “Should I be?”, etc. Only what was needed remains)
- Remove several repetetive lines from military personal after signal is detected.
- Trim Frenzy’s escape to the car

Bumblebee signal scene:
- Cut Sam’s call to police and his talk about the neighborhood watch
- Cut Bumblebee driving circles around Sam and Sam throwing his keys

Desert Attack:
- Completely removed Indian telemarketer and credit card gag.
- Removed Epps lines “Man, If you could see this - - - - .” and “Bring It”
- Removed “Bring the Rain” line.
- Rearranged and trimmed much of the footage so that the action flows better.

Bumblebee Chases Sam/Barricade Scene:
- Trim footage of news
- Cut out audio of Sam saying “Good Morning Mojo,” and “It’s too early..” to allow for it to be later in the day.
- Trim some frames from Sam flipping on his bike.
- Cut Sam telling Barricade that he’s had the worst day – removes uneccessary delay by Barricade
- Trim Sam’s delay in running away
- Cut Sam’s line about dreaming
- Cut line in car about ditching the Monster – Sam hits the steering wheel and the car starts (Note: Unfortunately I wasn’t able to fix the continuity error with the tire spinning, but that’s is Bay’s error, not mine.)
- Mirrored the scene of Bumblebee flipping Barricade into a building and them fighting on the ground to make the action flow in the same direction (pretty amateur mistake by Bay & co. here). Later shot of Barricade is mirrored as well.
- Trimmed some frames after Sam kicks Frenzy’s head.

Military Airplane:
- Cut a few lines at beginning of discussion of Skorponok

Pentagon:
- Cut conference call and comment about the defining the Presidency.

Hoover Dam/Sectory 7:
- Cut most of Frenzy’s fall. Spliced a small piece of footage in during Prime’s speech at the Observatory.
- Cut SecDef talking to Lennox
- Cut SecDef having a hissy fit about the military not knowing about Sectory 7 etc.
- Cut shot of Barricade after Starscream calls the Decepticons to mobilize
- Cut Maggie asking what kind of energy the cube had
- Cut Wolvering/Freddy Joke and Simmons asking for a phone, etc.
- Cut Maggie correcting Simmons about Finland and the SecDef’s comments
- Cut some of Maggie’s reactions to cellphone bot

Attack on S7:
- Cut shot of Barricade with other Decepticons
- Cut one shot of Frenzy messing with computers
- Cut SecDef line about the Rangers not losing
- Cut Sam asking how BB is doing (good call Reave)
- Cut Lennox reference to “Mission City” – This fixes the error with it being called LA in the sequel
- Cut shot of Bumblebee and others leaving dam area, Sam asking how the cube is in the backseat and some guys spraying Megs.

Final Battles:
- Cut some of Frenzy fight and the Airforce receiving the message from Glenn
- Cut more shots of Barricade
- Rearrange footage of Optimus and Bonecrusher transformations
- Cut out boy saying, “Cool Mom!”
- Cut F22′s mobilizing and Glenn saying that they’re being sent to the city.
- Cut wide shot of city
- Cut Lennox/Epps argument about airstrike, “That’s Alien!”
- Cut and rearranged scene of robots created by the Allspark so that it’s only Dewbot that’s created, no XBOX or SUV.
- Cut shot of Mikeala driving out of alley and “I’ll drive, you shoot” line.

- Cleaned up various transitions.
- Removed a couple of second during Desert battle.
- Removed Barricade’s headlight probes.
- Cropped footage during Barricade/Sam encounter to make cut more natural looking.
- Cut part of Sam/Mikaela after Sam tackled her off moped.
- Cut small bit of footage at end of Barricade/BB chase to eliminate obvious continuity error (shot of BB wheel inside warehouse when they should be outside).
- HEAVY cutting of scene at Sam’s home. No more “earthquake,” no more power outage, no parents in Sam’s bedroom, etc. This is now a very fast paced scene that keeps the flow going. (This is by far the biggest change in this version) There were a couple humorous moments here that I liked, but at the cost of about 6 minutes, I don’t think they were worth it. I like this much better now.
- Small trim to improve handcuff scene further.
- Removed Epps line from BB/Giant cube scene.
- Rearranged Mission City battle to eliminate delay between Megatron killing Jazz and Optimus’ arrival (I was soooo close to being able to do this with previous software, but ultimately had to scrap it).
- Had Megatron come through roof as soon as Sam gets up there (borrowed from Uncanny Antman, though pretty sure the cuts are different – and I do keep the reason for Sam going to that building).
- Removed “Shoot, shoot!” line.
- Removed, “awww” from “Awww, Jazz” line. (borrowed from UA also).
- Removed BB speaking at the end. (Tried this before and couldn’t even really even get it close to working. New Software made it possible, but still wasn’t too easy.)
- Shortened Optimus’ lifting of the SUV.
- Removed the BB pee scene (used UA’s edit as partial reference). I don’t mind this scene myself, and I think it seems in character for BB, but it seems to bug a lot of people. It also eliminates the need for the dragged out removal of Simmon’s clothes.
- Various other small changes/fixes.
Cover art by CBB (DOWNLOAD HERE) 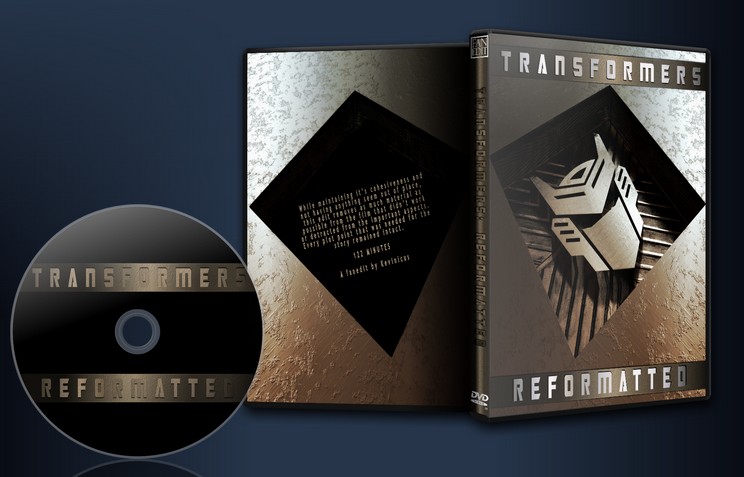 It’s a great edit and I like it a lot. Though I enjoyed some of the cut jokes and the attempted shutdown of NEST, mainly because the director gets shoved out of a plane (like most of us want to do to most politicians), having said that you did want you set off to do and have improved an already awesome pair of movies, especially Transformers 2. Even Micheal Bay hated the final script for that one, and you have made massive improvements and made both more focused and intense.

I salute you sir!
J
jim-diaz 1 reviews
Report this review Comments (0) | Was this review helpful? 0 0