Transformers: Attack of the Score

Brief Synopsis:
In the year 2005, the Autobots and the Decepticons are still locked in battle, but a deadly new force enters the fray–a giant killer planet known as Unicron. The heroic Autobots must fight for their own survival and to save their home planet from destruction.
Intention:
My intention was to create an entirely new way to enjoy this animated classic by combining two of the biggest franchises of all time: Transformers and Star Wars.

It all began when one day I got the inspiration to play John William’s “Duel of the Fates” over Optimus Prime and Megatron’s epic duel in the animated movie. It worked so well that after a couple of tests with various pieces of music, I decided to do the entire movie.
Special Thanks:
Special thanks to reave and Neglify.
Release Information:
Special Features
- Unicron in July
- Music-less shuttle attack
- Alternate Starscream coronation
- Trailers for Reave’s Resparked saga
Editing Details:
The original 80′s soundtrack was almost completely removed, except in two scenes in the beginning where it simply wasn’t possible.

The sound mix was re-done in several scenes; because the original music was mostly rock, the sound mix was quite weak in certain scenes and had to be energized to accommodate the new orchestral soundtrack.

The music is selections from all six Star Wars movies. Themes were loosely assigned – Optimus Prime inherits Yoda’s theme while Megatron gets the Imperial March. Unicron, of course, gets the Emperor’s theme.
Cover art by Reave and Neglify (DOWNLOAD HERE) 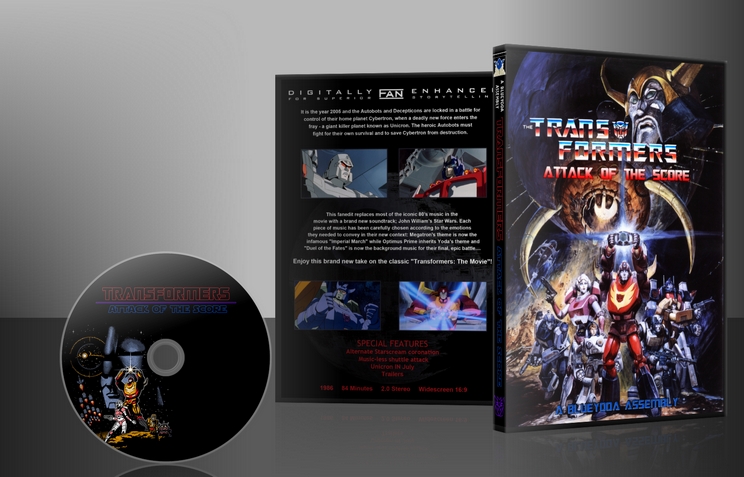 6 reviews
9-10 stars
100%
7-9 stars
0%
5-7 stars
0%
3-5 stars
0%
1-3 stars
0%
Overall rating
9.6
Audio/Video Quality
9.7(6)
Visual Editing
9.8(5)
Audio Editing
9.7(6)
Narrative
9.4(5)
Enjoyment
9.7(6)
Already have an account? Log in now or Create an account
View all user reviews View most helpful
August 02, 2018
Overall rating
9.6
Audio/Video Quality
9.0
Visual Editing
10.0
Audio Editing
9.0
Narrative
9.0
Enjoyment
10.0
Wow, what a creative idea and a brilliant execution! The Star Wars music works incredibly well with this movie--there were so many parts that I couldn't help but smile when I'd hear the perfect blend of music and visuals. There is an obvious gap near the beginning that is unaltered and a few little nit-picks here and there, but aside from those, this works incredibly well and is totally worth a watch, especially if you're a fan of the classic Transformers movie.

My only real issue with this edit, then, is sort of a compliment--Blue Yoda was -so- close to nailing the entire thing, I wish he would create a version 2.0 of this release to fix that unaltered gap 8 minutes in. Really, though, this edit is genius. There are so many musical cues that line up perfectly with the action on the screen--from the 20th century fox roll-off to the freeze frame of the closing credits, this edit is inspired.

- The prolog and opening credits are perfect--as if they were already designed around this musical score.

- Not strictly a musical edit, but I really appreciated the removal of the cheesy "chomp, chomp" sound effect inside Unicron when he eats his first planet.

- Megatron "such heroic nonsense" is another perfect cue

- Following the 8-minute gap, there's a minute or so of odd reversed music which I found very distracting and didn't work at all for me.


From here on out, things generally range from "very good" to "extremely awesome"...


- Another great cue when the dinobots transform to attack Devastator

- When Optimus Prime arrives and Duel of the Fates kicks in, oh man, epic! And the point where the music changes when his thrusters fire at the beginning of his transformation sequence is perfectly timed! I used this particular scene to show a coworker (also a long-time Transformers fan) how cool this edit is.

- The music leading up to Megatron being tossed overboard is fine, but the music for the ensuing power struggle aboard Astrotrain is far too somber. It would be perfect if these were Autobots turning on eachother, but this is just standard Decepticon treachery--the music shouldn't imply any sort of tragedy here.

- The coronation ceremony had a few techincal issues but it mostly works.

- The beginning of Unicron's assault on Moonbase 1 needs a little music but things pick up soon enough. The attempted escape from Moonbase 2 / Galvatron's order "Decepticons: to Earth" is also a little bare.

- The Falcon escape theme as the shuttles leave earth is used perfectly. Kup's lines aboard the shuttle get a little lost in the music when he starts telling his story, though.

- The Decepticon cruiser attack with the Ep 4 Deathstar escape/TIE fighter sequence is another perfect choice.

- The under water scene is a very interesting example of the challenging task the editor faces. The music here (from Ep 1) is also underwater, but in that film, the threat is a distant, foreboding, mysterious threat. It doesn't quite work here because Hotrod's threat is personal, direct, and immediate. His battle with the kelp and fish-bots is too fast and action-packed. Once the battle with the squid-bot occurs and the music picks up, things are perfect again. Anyway, I can see that this would be difficult scene to score. I don't want the editor to feel like I'm stomping all over things--the edit as a whole is fantastic. This was not an easy task he set himself to.

- The final act: the big space battle, Hotrod vs. Galvatron, the opening of the Matrix, the ending climax--all of it is just a rollercoaster of awesome, all the way through to the end credits! I was smiling the entire time, fantastic use of the music!

- Not to end it on a gripe, but the score used at the end credits runs out before the credits are done, leaving a good 40 seconds of silence. For those of us end-credit-watching nerds, it'd be nice to have the last bit filled in. Personally, I'd use something mysterious just for fun--like the music at Qui Gonn's funeral pyre from Ep 1 (several fan edits of Ep 1 end on this scene and it works really well as an ending).

The video is not the best quality on this edit--of course there's no contest between this and the Blu-ray released after the edit was made, but this is a bit muddy even for a standard def file. Being that there were no actual video edits, though, everything else is perfect.

Despite this edit being a strict audio swap, the sound track does not quite sync up properly to my own (higher quality) rip from the stock DVD. I ripped this edit from the DVD it was distributed in to mp4 format, so maybe there was an issue with the DVD as distributed or my re-compression of it--whatever the cause, the audio tends to drift ahead or behind by up to a half second or so, depending on the scene. Anyway, after chopping the soundtrack into a half dozen or so pieces, I was able slide them around and sync them up with my copy.

There are two reasons I bring this up: first, it would be possible to distribute this edit as an audio-only file, saving a lot of bandwidth, especially now that an HD version of the movie is available. Second--and I've already done this with my own copy--you can splice it into a copy of the un-edited movie alongside the original soundtrack for a convenient dual-soundtrack version of the movie.

Most people are familiar with the Star Wars score, and many of us know it well enough to name the scene when we hear the music. That means, for this edit, people will be expecting not just for the music to fit the scene, but for the mood of whatever was happening in Star Wars at that time to match the mood of what's happening in this film. That's not easy and BlueYoda has pulled it off really well.

This is a really fun edit, I've watched it 3 times now and there are still parts that make me smile because things are just so perfect. This was a fantastic, creative idea--from the 20th century fox drum roll to the closing credits, it just works amazingly well. I really hope BlueYoda will revisit this some day and give it the finishing touches it needs for that missing gap--perhaps now that Blu-ray has been released...

Do you recommend this edit?
Yes
Format Watched?
DVD
R
radium226 Top 500 Reviewer 6 reviews
Report this review Comments (0) | Was this review helpful? 0 0
September 27, 2014
Overall rating
9.5
Audio/Video Quality
10.0
Visual Editing
10.0
Audio Editing
10.0
Narrative
10.0
Enjoyment
9.0
What a fun film. I never even fathomed watching this old thing until I came across this intriguing project. Not much to say really: Every track used was perfectly placed, even adding tension to scenes I thought tension-less (I didn't give a damn about Daniel and his dad, but that music sure made me care when Spike was about to get dissolved!) Those "irremovable" songs from the beginning did put me out a little bit, but the rest of the score made up for it. Great edit!

Do you recommend this edit?
Yes
Format Watched?
DVD
R
rantus-vil Top 500 Reviewer 10 reviews
Report this review Comments (0) | Was this review helpful? 0 0
February 01, 2014 (Updated: February 01, 2014)
Overall rating
9.1
Audio/Video Quality
9.0
Visual Editing
10.0
Audio Editing
9.0
Narrative
9.0
Enjoyment
9.0
I really enjoyed watching this. It's amazing how much more seriously that you can take this movie with an orchestral score. I'm not putting down Vince DiCola. I enjoy his score and own it on CD. It's just that Transformers with John Williams' Star Wars music is magnificent.

The widescreen version of the movie was used, which is a shame, because, in this case, the fullscreen version actually shows more. Oh, well.

As BlueYoda noted, in two places, the original music wasn't removed, because it wasn't possible. The first is in the first scene, where you can still hear a bit of "Unicron's Theme".

The second is the main bulk of the Battle of Autobot City. This is before Optimus' arrival. Basically, starting at about 8:35 (right after the attack on the shuttle) and going to about 16:16 (right after Blaster radios Prime), the original score (as well as Stan Bush's "Dare", which turns out to be the only song in this edit) are present. What this means is, for nearly 8 minutes, you're simply watching the Transformers movie unaltered, which is jarring. Since it's unavoidable, however, I'm not taking off any points for it. I do, however, have to take off a point, because, when the audio goes to the original score and then back to Star Wars music, each time, it's audibly noticeable (not sure what the correct term is). Also, when it goes back to Star Wars music (the end of the radio tower scene), there's a slight video hiccup (at least when I view it), so overall audio/video quality gets a point taken off, too.

Extras include trailers for other edits, two fun gags, and the shuttle attack scene without music (though "Instruments of Destruction" is briefly audible as Megatron transforms). The menus are nice.

Wow! Awesome Job! Thank you to a fellow Montrealer for such an edit.

This was excellent! All the new music felt that it naturally belonged there. Awesome job blue!

Do you recommend this edit?
Yes
N
neglify #1 Reviewer 462 reviews
Report this review Comments (0) | Was this review helpful? 1 0
View all user reviews