Brief Synopsis:
This fanedit restores the VHS version of Thundercats - HO! The Movie. Consisting of the first five episodes of the second series, Thundercats - HO! The Movie removes some scenes found on the DVD release. Also, the double take on the cliffhangers, created by removal of the commercials, are no longer present.
Intention:
To restore the VHS version of Thundercats - HO! The Movie I grew up watching in the best quality available to me.
Release Information:
DVD
Cuts and Additions:
When the Berserkers storm the island on which the three Thunderians and Berbils live, there is an extensive fight scene, showing the Thunderians and Berbils manning self made defensive weapons. Most of these scenes are missing in the VHS release.

While Snowman nurses Lion-O, they are spotted by Slithe, who goes in for a closer look. Deleted from the VHS version is an extended conversation between the mutants on what course of action to take. Slithe wants to attack, but Monkian and Jackalman aren't sure whether it's wise to go against Mumm-Ra's orders.

Before Lion-O is chased by the Fist Pounder, there is a deleted confrontation with Snowman. It is this brief encounter that explains how the end of Snowman's lance comes to be broken.

After Panthro leaves Hook Mountain in the Thundertank, there is a scenes not present on the VHS. Jackalman and Slithe eat while Monkian gets the Fistpounder into position to wait for Panthro. The Thunderians overhear this and are resolute to escape.

When Lion-O tries to enter Mumm-Ra's Pyramid, he encounters Ma-Mutt for the first time. Those scenes did not make the cut for the VHS.

The Berzerkers argue over who gets the biggest share of Mumm-Ra's gold. This scene did not make the cut for the VHS.
Cover art by Booshman (DOWNLOAD HERE) 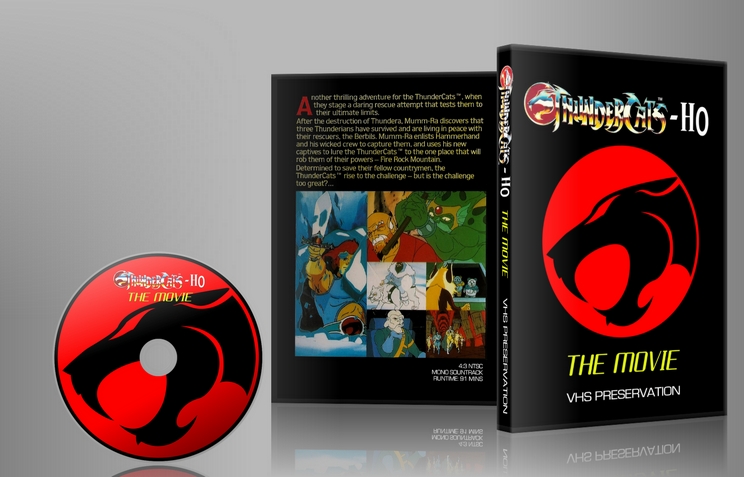