Brief Synopsis:
Both Thunderbirds movies suffer from pacing issues (quite slow), very light on scoring (due to budget constraints) and just generally not as good as any of the 32 episodes. These edits turn them into full blown TV episodes as they would have been in 60's but in HD and widescreen, with score enhancements and ad bumpers. WARNING: This may be puppets and "childrens TV", but the dialogue is no t patronizing, dialogue is mature idiom (not childish) and "people" get shot in cold blood or die !!!! 60s childrens TV was full on gruesome, thank heavens.
Intention:
I Found both movies to plod frankly. As much as I love Thunderbirds are Go, it feels bland and the dream sequence (now removed) is frankly padding. Thunderbird 6 feels just empty and it it ends up being a great TV episode much to my own surprise. I hope you will agree.
Additional Notes:
The episodes ran 52 -55 minutes. These both come in at 54min. In order to turn them into episodes, I used newly made opening and closing titles from the TV series 16:9 version, and slightly cropped the movies which were filmed in 1:2.35 to match. The editing removed a few side shoots from TAG like the nightclub in the sky, but T6 just needed compressing overall. That level of compression of material without losing virtually any scene is a huge challenge. It meant removing sentences, and even individual words, relaying dialogue over different shots and a whole load more to make it flow seamlessly. The final most enjoyable part was expanding the score to densely cover the episodes just like the TV series. The problem was that the Films were made by a different production companies so new scoring needed to be used and the budget would only stretch to about 25/30 mins of new/re-recorded music. That's fairly thin for a 90 min movie compared to the TV episodes and they suffer as a result. Matters are made worse by a plodding pace in many sections, with scenes being overwritten in many cases. For the TV series, the makers had a huge bank of music to draw from which meant that many episodes had more music that the films. The TV recordings couldnt be used for the feature films. Using the CD scores of the TV series, I have significant enriched the resulting material. Of course, the best part was making the teaser openings for both. I should add, virtually every shot had to be re-framed for ideal content given the aspect ratio changes. And there you have it.
Other Sources:
Thunderbirds CD Scores
Release Information:
Digital
Special Features
The authored Blu Ray contains extras including an unused opening,
Editing Details:
The objective was to keep the pace going, trim superfluous dialogue, remove all padding, tighten up everything to feel like an episode and boost the scoring density to match the episode structure. In addition, completely new add bumpers were made (since the surviving ones are in black and white) and newly made from scratch end titles. The eagle eye may notice the opening titles have been tweaked and also re-made.
Cuts and Additions:
The editing in both of these contain too many tiny trims to document or to be interesting so here is a summary instead.

They are structured IDENTICALLY to the TV series, including that Ad bumbpers which no longer exist in color and which were remade from scratch. The only dif is the aspect ratio which is about 1:1.8 ish. 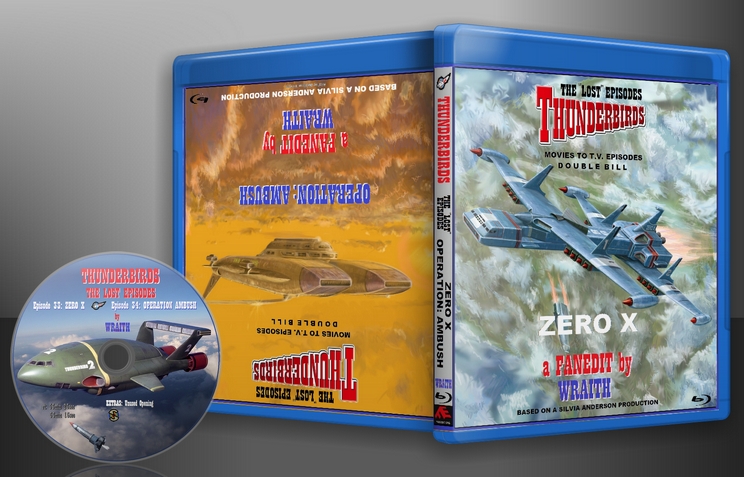