Thief And The Cobbler, The – Recobbled Cut 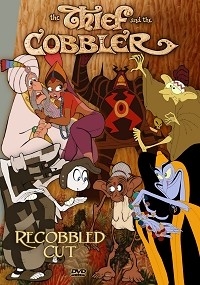 Join the Forum Discussion
Tweet
Brief Synopsis:
It’s the the great effort to recreate the original version of this lost animation classic.
Intention:
Acclaimed master animator Richard Williams spent the better part of three decades working on what was meant to be his masterpiece, The Thief and the Cobbler.

After his success as animation director on Who Framed Roger Rabbit he was finally able to get studio financing to take The Thief from a career spanning side project to full-blown production. A stolid perfectionist, costs mounted and deadlines loomed with Williams at the helm, and Warner's eventually pulled out when Disney announced the similarly themed Aladdin.

With funding gone, the film was taken from Williams by his creditors and was completed by others (under the leadership of Fred Calvert), cheaply and poorly while making massive changes to try to make it more mainstream. This version only saw release in Australia and South Africa, as The Princess and the Cobbler. Later Disney bought it and heavily edited it again, in such a way as to make it appear a cheap knockoff of Aladdin (instead of the film that’s largely believed to be the greatest inspiration behind Disney’s film), while making it almost unwatchable in the process. Released as Arabian Knight, it was a travesty.

This Recobbed Cut is a recent fan-created reconstruction of the film as Williams wanted it, or as close to as possible. Based on a workprint of the film from when Williams was nearing completion (shortly before the film was taken away from him). Using the workprint, DVDs of the two officially released cuts of the film, and other related elements taken from various sources this Recobbed Cut reveals the masterpiece that could have been.

This new version, Recobbled Cut Mark II, has been compiled after a widescreen version of The Princess and the Cobbler surfaced shortly after this version became widely available online. This was such a huge find that Garrett felt compelled to recobbled it once again, incorporating more of the fully animated widescreen material that he just didn’t have before.

The scenes which are most affected are the witch and war machine scenes, which have been improved in quality.

Restored version of Richard Williams’ unfinished animated masterpiece, The Thief and the Cobbler.

Unofficial restoration by Garrett Gilchrist. This is not intended for profit, just a fanmade research project and tribute to this classic film.

The film was worked on for 26 years, with a team of master animators like Ken Harris and Art Babbit. This film inspired Disney’s Aladdin. Ruined versions of it were released as Arabian Knight and The Princess and the Cobbler.

For the first time ever on video, enjoy the original version of this lost
animation classic, written and directed by three-time Academy Award winning
animator Richard Williams (animation director of Who Framed Roger Rabbit).
Nearly 30 years in the making, a labor of love by a team of animation greats,
this was to be the masterpiece of Williams career, perhaps the most ambitious
independent animated film ever conceived. The film was the inspiration for
Disneys film Aladdin, which proved to be its undoing. After over two decades of
work, the film was taken away from Williams when he couldnt meet his deadline.
It was eventually bought by Disney, recut and destroyed. It has never been seen
the way it was intended to be seen … until now. Based on Williams’ original
workprint, missing scenes have been restored using storyboards and unfinished
animation. Restored to its true form, this lost classic has finally been found -
for you at home.

When Richard Williams was fired from his film The Thief and the Cobbler (after 26 years of work), Fred Calvert was hired to finish it quickly and cheaply. He did an incredibly poor job. His version was called The Princess and the Cobbler, later recut further by Miramax into the nearly unwatchable Arabian Knight. This “Recobbled Cut” uses footage from Williams’ original 1991 workprint with higher quality footage from Arabian Knight and Princess and the Cobbler … this does include some lower quality Calvert animation with the high quality Williams animation – it’s easy to tell the difference. The film has been carefully reedited to match Willliams’ original 1991 workprint for the film, and his original vision. Calvert footage has only been used if it conforms to Williams’ storyboards – in some cases footage has literally been reanimated frame by frame in Photoshop to make it match Williams’ scenes! The restoration in total took 4 months to complete.

Restoration from the editor/filmmaker who brought you Deleted Magic, SW Classic Edition, and Gods of Los Angeles.

Story:
It is written among the limitless constellations of the celestial heavens, and
in the depths of the emerald seas, and upon every grain of sand in the vast
deserts, that the world which we see is an outward and visible dream, of an
inward and invisible reality … Once upon a time there was a golden city. In
the centre of the golden city, atop the tallest minaret, were three golden
balls. The ancients had prophesied that if the three golden balls were ever
taken away, harmony would yield to discord, and the city would fall to
destruction and death. But… the mystics had also foretold that the city might
be saved by the simplest soul with the smallest and simplest of things. In the
city there dwelt a lowly shoemaker, who was known as Tack the Cobbler. Also in
the city… existed a Thief, who shall be … nameless.
Cover art by OCPmovie and Mark Smith (DOWNLOAD HERE) 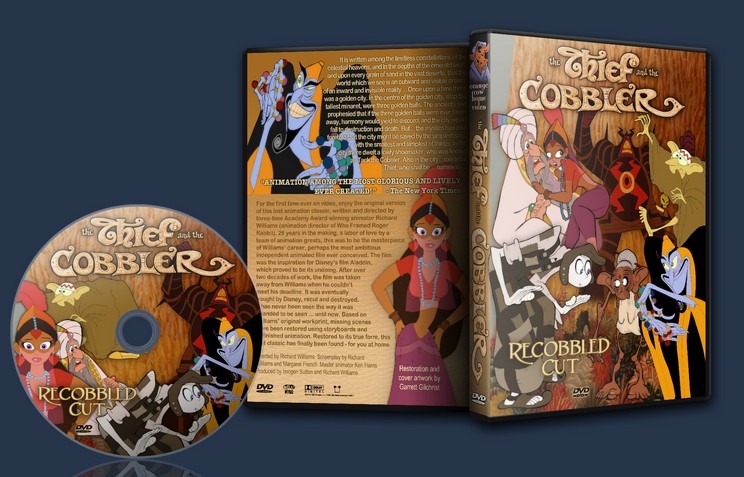 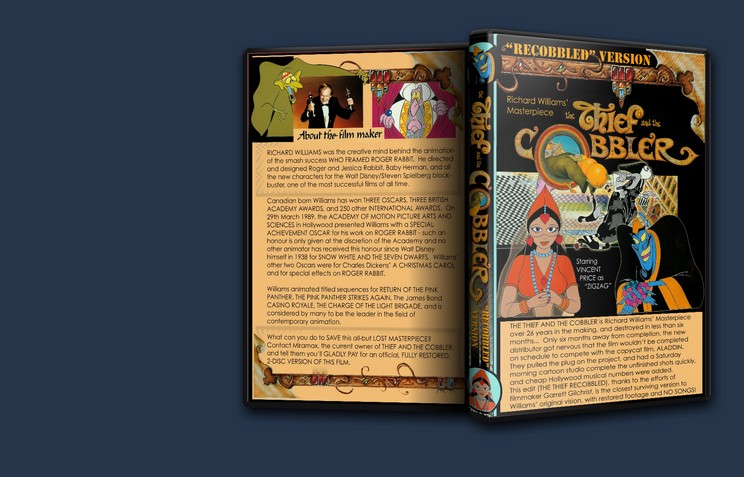 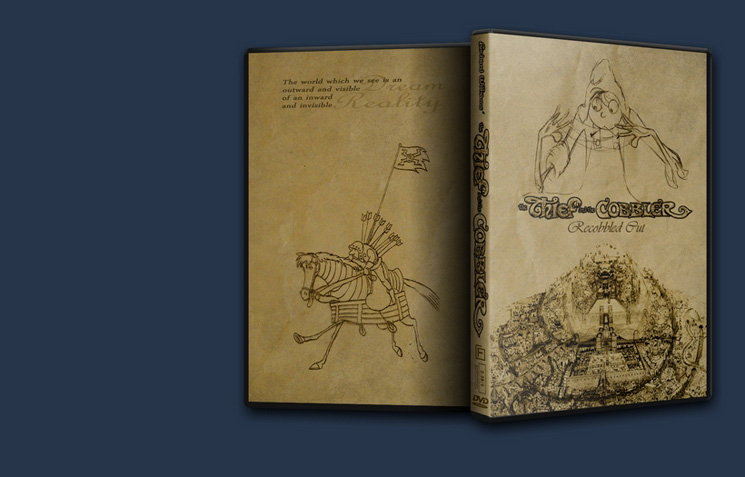 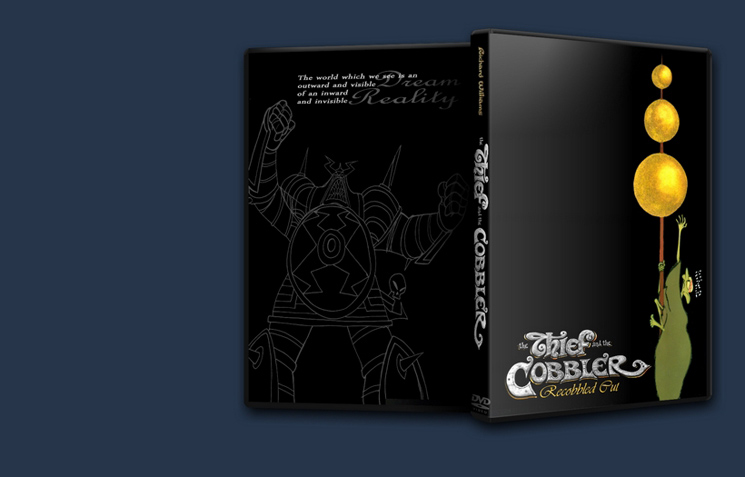 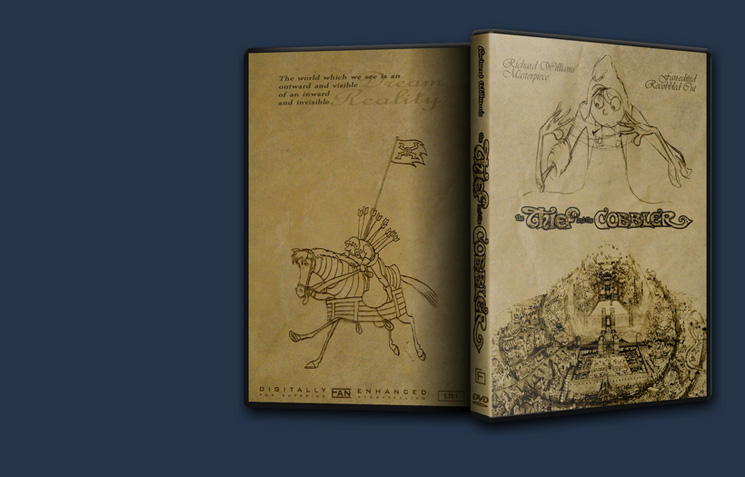 I gave this edit top marks not for the editing, narrative, or enjoyment - I gave it top marks because it deserves to be seen. This is an important part of film history, allowing us to see a forever unfinished work of visual genius. If you have any love of hand-drawn animation, you owe it to yourself to give this a watch.

The Thief and the Cobbler's decades-long production is one of the most incredibly sad Hollywood stories about a determined and talented filmmaker getting reamed at the last minute by impatient producers. The final cuts of Thief were dismal messes complete with hastily written and badly sung songs that were never intended to exist and the addition of unnecessary voice acting tacked on to the two initially silent protagonists. To add insult to injury, the whole project was ironically passed off as a rip-off of Aladdin by critics when in fact the opposite was true.

It's no wonder Richard Williams never again spoke of his destroyed dream and faded from show business after its release.

Then Garrett Gilchrist came in and used everything in his power and on the cutting room floor to give this tragic tale a bittersweet ending with this well thought out and intricately cared for edit that is by far the closest to Williams's vision to date.

A/V Quality: 10
-Visual Editing: 10
Now, this isn't to say that this edit was seamless; it couldn't possibly be. This gets a 10 because Gilchrist's gumption and drive to reinsert storyboards and uncolored workprints with the help of some of the actual animation team is to be an inspiration for years to come. I can't tell you what frames Gilchrist photoshopped, either, they fit so well. The use of Calvert's footage was indeed noticeable, but unfortunately completely unavoidable.

-Audio Editing: 10
The titular thief and cobbler no longer speak (with the exception of one brilliant final line from Tack), just as Williams wanted. Deleted voice acting from Vincent Price in particular struck me as downright important, not to mention respectful of the terrific actor.

Narrative: 10
The story is back on track and remains simple and timeless (and thankfully song free). The painstakingly crafted visual segments are wonderful and mesmerizing. This would have been a classic had it been finished.

Enjoyment: 10
Garret Gilchrist did something that needed to be done, and he did it well. There's really nothing more I can say there. This is proof that fan editing isn't just fun. Sometimes it's vital.

I consider it the most important fan edit.