Brief Synopsis:
This is not an aggressive fan edit, as I love about 90% of this movie and watch it often.

But I wanted to create an alternate viewing version that makes the Shadow more mysterious and darker. To this end, I have cut all direct explanations of his origin. I have made all scenes that feature the Shadow more serious, removing any or all forced humor where possible.

And of course, I have altered the video to a grainy, public domain style black and white adventure B-movie.
Intention:
I have a deep fondness for the original 1994 The Shadow. While flawed, I still think it is highly underrated. With this edit, I wanted to do two things...One, while maintaining the classic 1930s romantic comedy mystery (in particular the scenes involving Baldwin and Miller), I wanted to tone down the forced humor during the actual Shadow scenes. Restore more darkness and mystery to the character.
And two, I wanted to take advantage of the wonderful 1930s production values and the poor 4x3 dvd release, and convert the picture into Black and White.
Additional Notes:
DISCLAIMER: I don't usually do this, but I will be up front and say I am not entirely happy with the video quality of this edit. But based on the poor source material and the limits of FCE, it is what it is.... I hope viewers will be able to look past this and still have an entertaining time with this B-Movie Adventure.
Special Thanks:
Rogue-theX. He is an inspiration! He created the dvd artwork and all the posters and lobby cards. His talent is amazing.

Also, special thanks to Fan Edit and Dwight Fry for their avid interest and great suggestions.
Release Information:
DVD
Special Features
Trailer
About This Edit
Shadow Art Gallery
Cuts and Additions:
--created all new opening credits using images of the Shadow through the ages
--opening origin gone
--"heavy lifting" line cut
--bridge gunfire scene trimmed
--cement block/Shadow shooting trimmed
--Tam's comedic responses during cab ride removed
--Tam waving goodbye cut
--fireplace dream/origin
--"Why have I not heard of him" cut
--Khan in sanctum talking about where Cranston got his suit and tie
--Tam's "hey that is catchy" regarding Atomic Bomb comment
--the lab guards bickering about what to eat
--Shadow wisecracks during lab battle
--"I sense someone is coming" cut
--"oh that knife" cut
--inserted Phurba/Tulku flashback during restaurant scene
--Cranston joke when sailor jumps off building
--cut "You called" Margo finding Cranston and smiling after sphere
--trimmed psychic dream
--cut "betcha wish you were nicer to me"
--cut bomb rolling down stairs and over Margo and father
--insert flashback during the final battle
--replaced "Original Sin" with more Goldsmith 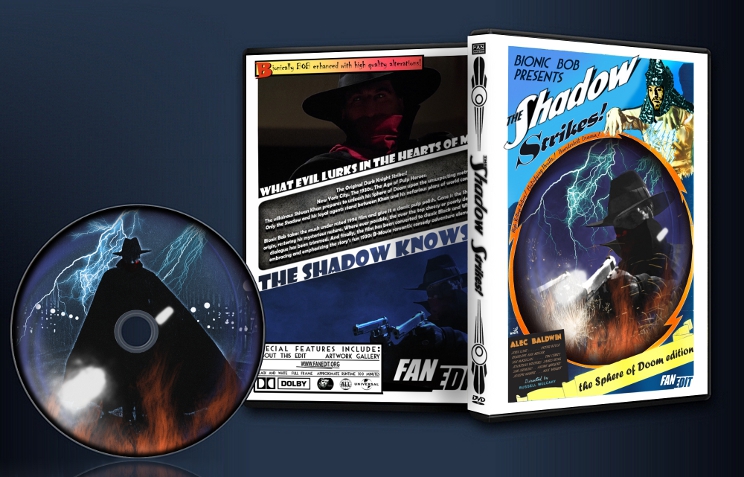 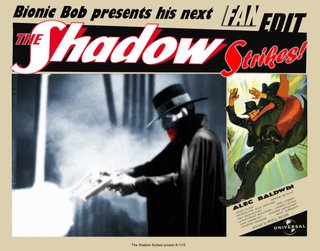 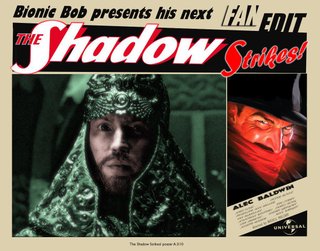 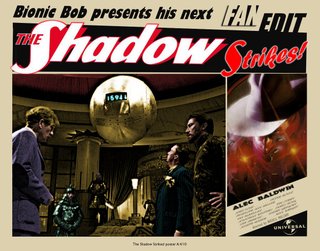 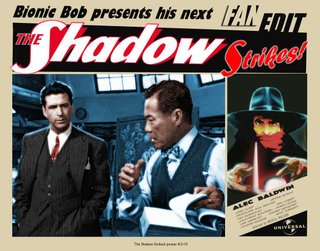 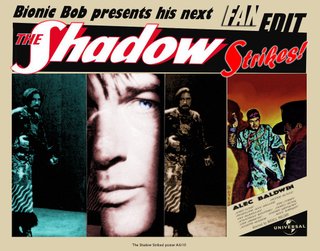 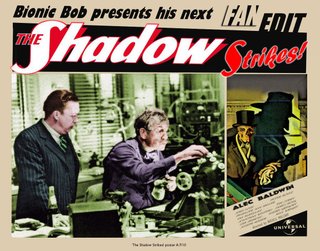 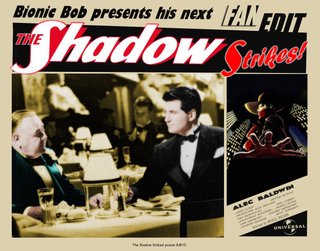 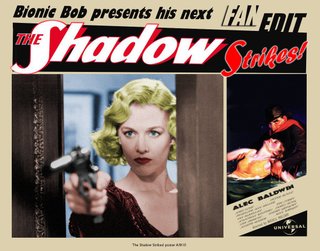 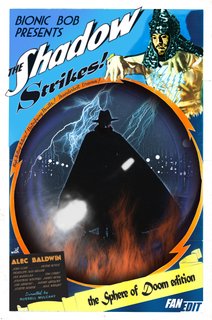 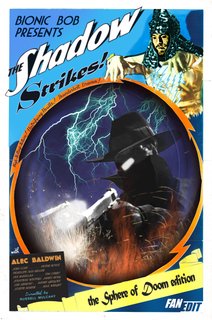 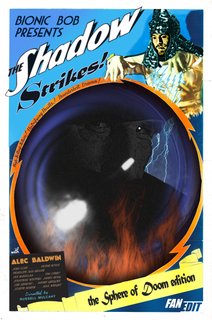 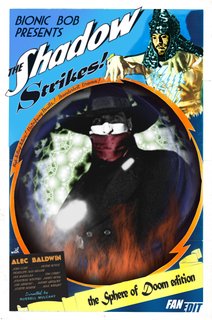 12 reviews
9-10 stars
92%
7-9 stars
8%
5-7 stars
0%
3-5 stars
0%
1-3 stars
0%
Overall rating
9.4
Audio/Video Quality
8.8(12)
Visual Editing
9.6(12)
Audio Editing
9.8(12)
Narrative
9.5(12)
Enjoyment
9.4(12)
Already have an account? Log in now or Create an account
View all user reviews View most helpful
December 20, 2016
Overall rating
9.8
Audio/Video Quality
8.0
Visual Editing
10.0
Audio Editing
10.0
Narrative
10.0
Enjoyment
10.0
A great take on this fun, underrated, gem of a movie. The new opening sets up the main character much better. Now we only find out later in the story, appropriately through a nightmare, how disturbing the Shadow's past is. The black and white works really well, though I love the richly saturated colors of the original. The "reel changes" are a clever way to set the tone of old, worn film without forcing us to watch the entire movie that way. In all a great success.
Despite the improvements, this movie remains flawed. Much better than the clunky story of Doc Savage (1975), it falls short of nostalgia for the 1930s of The Rocketeer (1991). But for fans of The Shadow, there's no alternative (until the if-wishing-made-it-so animated feature in the style of W.M. Kaluta using Orson Welles' voice from the salvaged radio plays!).
While not a perfect replacement for the original, I find myself watching this version more often than the color original.

In saying that, it was okay. I would prefer colour, and some other reviewer said something about the quality of the B&W which I agree with. It's not entirely consistent.
My feelings of nostalgia are no longer strong now as I see it for the weak movie that it really is.

Bad guy who can control minds steals building and builds bomb. okaaaay then. I could think of more cool things that I'd rather do.

This is a good fanedit, just not a good movie. Thanks for making it.

Do you recommend this edit?
Yes
Format Watched?
DVD
Y
yoshif8tures Top 100 Reviewer 29 reviews
Report this review Comments (0) | Was this review helpful? 0 0
April 18, 2014
Overall rating
9.9
Audio/Video Quality
9.0
Visual Editing
10.0
Audio Editing
10.0
Narrative
10.0
Enjoyment
10.0
I saw this one in the theater and loved it right away. The movie is a solid throwback with some minor pacing flaws and a few weak jokes. BionicBob realizes this and simply makes minor cuts to make a good movie even better. I did not notice any editing flaws and the pacing has been improved and feels great. It's just a tighter and better movie now.

My only complaint is a personal one and I'm even conflicted on it: the use of black and white. BionicBob was trying to make this seem like a movie right out of the 50's so black and white works fine, but the problem is that the movie also looks great in color. The scientist being colorblind also does not work so well in black and white.

That being said, the edit is great and I highly recommend it.

A slew of retro movies came out in the 90s, doubtless inspired by the Indiana Jones series. Where the Jones’ movies were rooted in action oriented cliffhangers, the 90s era films, Dick Tracy, The Phantom, Rocketeer, and The Shadow, among others, harked back to 30s pulps and comics. I saw the later films theatrically and was disappointed by each. Eventually, I bought Tracy and Shadow on laserdisc for a buck each.

The Shadow could have, and ought to have been, an excellent ride. Alec Baldwin had more screen charisma in his role than Beatty, Zane, Campbell, or much later, Jude Law. He and Penelope Miller also sparked undeniable chemistry, perhaps not romantic, but they definitely worked as a couple. Then there was the set design and costumes, all top notch.

Unfortunately, the movie was undermined by poor writing and sloppy direction. The Shadow seemed aimed at eight year olds, circa 1950s. The narrative was gauzed in fuzzy, misplaced nostalgia. No one bought in, not adults, not teens, not children. By the 90s, we were all much too sophisticated.

Bionic Bob has done a remarkable job, raising the enjoyment several levels. The black and white sheen is perfect, not only with the Manhattan set design, but with characters, especially in gowns and tuxedos. What cuts Bob made, I could not tell, yet the narrative flows quicker and seems less silly than I remember.

The sound mix was a dynamic, often aggressive, two channel LPCM. Too loud during action sequences (drew comments from others in the room), too quiet with dialogue. I ended up using headphones. I hate suggesting this, especially as a music geek, but I think normalized audio might have worked here.

The black and white seemed inconsistent. Pristine sharp in some scenes, soft focus in others, and scratchy and dirty in others. I didn’t mind, but every time a scratch appeared I noticed.

Aside from those quibbles, BB’s The Shadow Strikes! is a classy improvement, easily recommended.

Do you recommend this edit?
Yes
Format Watched?
DVD
V
vultural Top 10 Reviewer 193 reviews
Report this review Comments (0) | Was this review helpful? 1 0
July 05, 2013
Overall rating
9.2
Audio/Video Quality
9.0
Visual Editing
10.0
Audio Editing
10.0
Narrative
9.0
Enjoyment
9.0
It took me a long time to finally see the theatrical version of The Shadow. For some reason it always looked like a poor knock-off of Burton’s Batman which had jumped on the bandwagon and arrived too late. In fact, it was only when I heard Bob was lending his skills to a fanedit, that I finally picked up the DVD to watch it.

My fears were partly confirmed by viewing the normal cut. Perhaps not necessarily in the “Burton Batman” comparison, but whilst I enjoyed certain aspects of the movie such as the excellent production design and Jerry Goldsmith’s majestic score, director Russell Mulcahy struggles to consistently engage the viewer with too many moments coming across as flat and rather uninspiring. Some of the blame must also lay with David Koep’s average script.

However, Bob’s said intention to inject some life into the film, to bring out the best elements was more than enticing enough to make me want to see The Shadow Strikes!

Firstly, the change to black and white does absolute wonders for the film. Whether it’s because the film noir style lends itself naturally to the old fashioned “serial” feel of The Shadow character, or just that it gives the film a little more gravitas, I’m not entirely sure.

There’s little doubt that the film benefits from an injection of urgency too. Some expert invisible cutting is evident here, creating a Shadow which feels more energetic and fun. Granted, the original cut was not particularly over long in its running time, but it had the feeling of a film dragging its heels – never a good thing. Thankfully, Bob has eradicated this problem, even managing to make Baldwin more convincing in the title role.

Granted, the film still has problems. It still can’t quite leap off the screen at you with the kind of vibrance or excitement which you so desperately want it to have. However, Bob’s version is a vast improvement and unquestionably is now my “go to” version. The Shadow Strikes, indeed! ;)