Mockingjay Part 1 original runtime 123 minutes has been reduced to 61 minutes.

The film begins with a quote from "The Treaty of the Treason" just like the original Hunger Games movie did. The quote used for the original movie was invented for the film. The text was marked as being sourced from The Treaty of the Treason whose text never appeared in the books. The text that I have written to begin this film is:
"From the Treaty of the Treason:"
"And the peace will be a contract.
Each district will supply the Capitol
in return for order and security.
Refusal to work will be an act of
treason punishable by death."
This is a condensed version of President Snow's speech from Mockingjay Part 1 that has been cut in this edit.

The movie then begins as normal

The titles for Mockingjay Part 1 have been removed

All scenes concerning Prim's cat have been cut

The filming of the first "propo" using the green screen fx has been reduced to a minimum (i.e. there's only one 'take')

Snow's reference to his cut speech has been removed

Katniss' second trip to District 12, her relationship elements with Gale, and her singing cut completely

The rebel attack in the woods leads directly to Peeta's third interview where he speaks about the rebel attacks on the grainery and dam.

Peeta is not shown images of Katniss singing during this interview, he betrays the Capitol seemingly of his own accord

The power failure during the bombing scene leads directly to Katniss hiding in the tunnel, the discovery of Snow's roses and the proceeding "propo" shoot is cut completely

Mockingjay Part 2 original runtime 137 minutes has been reduced to 110 minutes.

The opening scene where Katniss' swolen neck is examined is cut, her injury is much less severe in this edit to allow for a believably faster recovery

The scene where Coin tells Katniss that she cannot send her to the Capitol has been reworked to indicate that Coin wants to keep Katniss under her thumb where she can be controlled. Some audio adjustments were made to blend this scene with Katniss' second meeting with Coin

The entire sequence where Katniss and Gale travel to district 2, Katniss gets shot, Katniss recovers from her wound in the hospital have been eliminated

The dinner scene at Snow's mansion has been tweaked and now follows Peeta's attack on Katniss. The scene now appears to show Snow speaking of Katniss' death by Peeta's hands instead of by the rebels in district 2

Plutarch's mention of Katniss' gunshot wound has been cut

Cressida's annoying "directing" of Katniss' actions have been cut

The scene where Snow is made aware of Katniss' being caught on video alive following the tar trap has been cut along with the first indication that Snow is dying from the poisons in his body. This reveal works much better as a surprise to the viewer at the end of the movie, humanizing him at a time where he has already lost all of his power.

The scene where Gale and Peeta discuss who Katniss loves is cut. There is no indication in this edit or in the trilogy of movies as a whole that Katniss would have ever ended up with Gale, it was a terribly developed plot device throughout, and has been rightly eliminated.

The idealistic ending where poor CGI and makeup effects are used to age up Katniss and make her look more like her mother has been eliminated completely. I accept that this change will be hard to accept by purist followers of the book. But I emplore you to see this movie for what it is, a gritty ugly war movie. A thought provoking tender moment of 2 characters learning to live with the atrocities they've experienced is much more satisfying than a "everything worked out great in the end" finale.

The ending has been rescored to accomodate this change 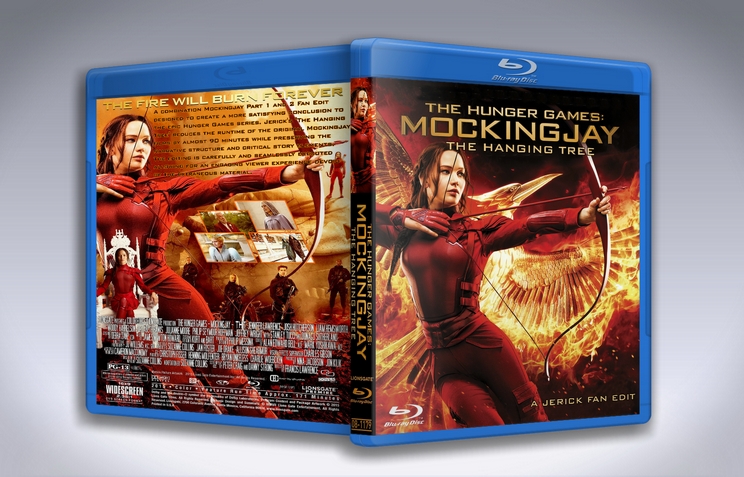 First of all, I never read the books, so I don't compare the movie to them. Second, I am no expert on editing whatsoever. I am just a tremendously huge fan of the fist two Hunger Games movies who was pretty disappointed by the final films.

One of the biggest problems for me back then was that the films dragged on forever because they split the story over two movies. Jerick gave me a movie with just the right pacing and an incredibly strong start with the film beginning with blowing up the dam. Also, I don't remember anything that I missed from the original cut, so again, I'd say damn good job here.

I watched the film together with my girlfriend who has never seen the original two films and she enjoyed it as well. She felt a few points weren't perfectly explained, but to be honest, I felt the same way with the original cut, where I had to read about a few things to full grasp every detail.

There was one weird cut, where all of sudden Katniss is hiding in the pipes or wherever, where we felt like "huh? Why is she hiding there all of a sudden?" But I don't really remember if this was that different in the original cut.

All in all, from a movie watcher perspective, this is the edit that should have made it to the public. Thank you, Jerik, for giving me the movie I wanted to see.

Do you recommend this edit?
Yes
Format Watched?
Digital
F
flounder Top 10 Reviewer 160 reviews
Report this review Comments (0) | Was this review helpful? 0 0
March 08, 2019
Overall rating
10.0
Audio/Video Quality
10.0
Visual Editing
10.0
Audio Editing
10.0
Narrative
10.0
Enjoyment
10.0
If the film-makers hadn't decided to waste so much time and money stretching this book out to two movies for no good reason, then we probably would have gotten something like this.

Do you recommend this edit?
Yes
Format Watched?
Digital
W
wilhelm-scream Top 100 Reviewer 49 reviews
Report this review Comments (0) | Was this review helpful? 0 0
November 25, 2017
Overall rating
9.3
Audio/Video Quality
10.0
Visual Editing
10.0
Audio Editing
10.0
Narrative
9.0
Enjoyment
9.0
I have to say, pretty good combination of both parts, into an almost 3 hour cut. Very seamless, works like one solid movie. There is a lot of material cut, some is a tad bit important for character development and the narrative, but it's alright in my mind. I thoroughly enjoyed this edit, and I would definitely recommend it. The editing is superb and professional.

Great job Jerick!
T
theryaney Top 500 Reviewer 20 reviews
Report this review Comments (0) | Was this review helpful? 0 0
August 18, 2016
Overall rating
6.5
Audio/Video Quality
10.0
Visual Editing
10.0
Audio Editing
10.0
Narrative
5.0
Enjoyment
5.0
I'm not going to go into a huge exposition as to what's great and what's not. The editing is top notch, this guy really knows how to keep the energy and narrative flowing through vigorous editing. The video/audio quality is A+, literally like watching the official Blu Ray. This guy is gifted in the art of editing.
Now, my biggest grievance is with the choosing of material he's cut from the film. 80% of what he's edited out is filler and is mostly unnecessary and it makes for a much tighter and cohesive viewing experience. But there are some KEY scenes that were removed from the film and it just didn't work for me at all. It's like he did an excellent job editing out over half the filler in part one, and let the majority of part two play out. He took out some very tense, important scenes and it left the movie lacking. The COMPLETE removal of all scenes involving the taking of Disctict 2 was baffling. Not to mention the removal of the entire rescue mission in part 1. After what appears firstly to be a tightly cut action/sci-fi finale, it just turned out to be disappointing.

I'd be happy to discuss with you what you thought was lacking in the movie due to the complete removal of District 2. My arguments for removing the scenes are these:

The largest impact of the District 2 scenes on the film is the injury to Katniss at the hands of a Capitol fanatic and the resulting emboldening of the rebels as a result. The exact same description can be given to what happens when Peeta attacks Katniss after being brainwashed by the Capitol, so it works as a very simple replacement.

The other important exposition that happens during this sequence is the revelation that the District 13 army will do whatever it takes, however unethical, to bring down the Capitol. While this is an interesting development in the movie, I think it is much more powerful to leave this revelation to the very end so that at first you really question whether Coin bombed the Capitol children.

You say that District 2 is an important turning point in the war, and maybe it is in the book I honestly can't say, but it does not play out that way in the movies. There are no scenes in the movies that follow the district rebels and how their motivations develop, the movies focus almost entirely on how they respond to the propaganda that is being released about Katniss. Therefore her survival of the bullet wound and subsequent actions are no more powerful in the movie than her survival of the attack by Peeta.