Hobbit: The Desolation of Smaug - Arkenstone Edition, The 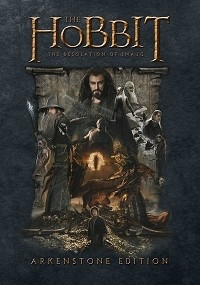 Join the Forum Discussion
Tweet
Brief Synopsis:
The belated follow-up to my “Arkenstone Edition” of AUJ, this edit aims to remove the bloat and improve the pacing of “The Desolation of Smaug”, while still retaining all the additional characters and storylines found in Peter Jackson’s retelling of the story.
Intention:
As with my AUJ edit, this is not a purist edition, but an attempt to improve upon Peter Jackson’s story. I wanted to keep Legolas, Tauriel, Dol Guldur and other material that many previous edits have removed entirely, but reworking these elements to make them work in the larger story that Peter Jackson is telling, and not be the annoying digressions I found them to be in the original version of DoS.

I’ve tried to keep the focus on Bilbo, Thorin and Gandalf as much as possible, while still making room for characters like Tauriel, Legolas, Bard and their stories (but making sure they never overshadow our main storylines). The last 45 minutes or so have also been reworked heavily to improve the pacing, and I’ve replaced the sequence in the forges with Smaug’s rampage in Laketown from the beginning of BotFA as the climax of the film.

Like I did with AUJ, I’ve also restored a lot of Howard Shore’s fantastic music that Peter Jackson decided not to use. The music editing in DoS wasn’t as much of a mess as it was in AUJ, but there are a lot of weird starts and stops in the music that don’t really work, so I think my restored soundtrack is much more coherent and effective, and more in line with the musical landscape of the LotR films. 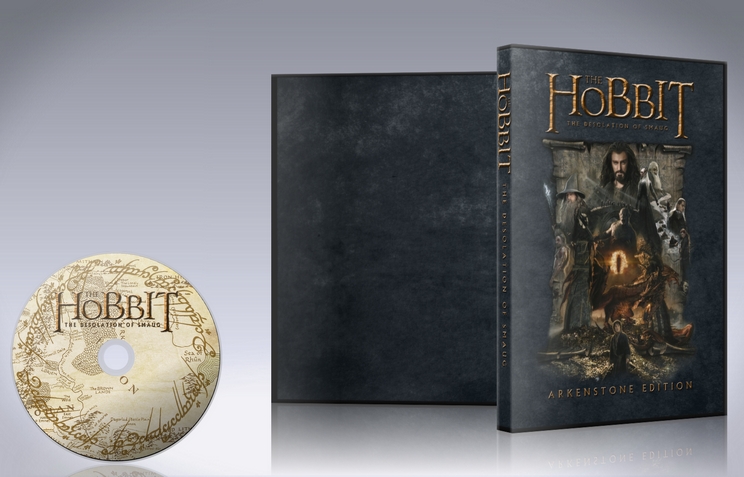 Finally we have the DoS - Arkenstone Edition =)

I only have a few comments to make:

-Regarding the Necromancer's revelation as being Sauron, i think it shouldn't be mentioned anything about the Eye of Sauron by Bolg or any other Orc. Sauron should have always been addressed as Master and the his revelation left to Gandalf, when the two battle.
For us fans who know the story, we know that the Necromancer and Sauron are the same but for the regular viewer i think it would be great to leave that ambiguity as much as possible and then we get to Gandalf's fight when Sauron finally reveals himself and the Eye. This will link with Gandalf's mention of the Eye of Sauron in Mirkwood. In my opinion it works even better this way.

- If there has to be a love triangle then I agree with masirimso17 in his assessment of the following:

1 - "The only time it kind of bothered me was in the Smaug scene. More specifically, the rescoring over “You carry something” and the lead-up to it felt tacky. I think Jackson made the right choice to make it silent in this instance. In the original movie it felt tenser to me with just Benedict Cumberbatch’s awesome voice."
2 - More of Legolas, Tauriel and Thranduil build up as characters, not necessarily exactly as in the original but a bit more exposition using those scenes would be instrumental.
3 - "Maybe if the ring’s voice is more clearly heard and just the part where Bilbo almost vomits is cut then this would be perfect." With that sound effect I've mentioned earlier, if doable, on all Sauron's lines).
4 - "Finally, I wish you had included the main Hobbit theme from An Unexpected Journey, but I understand why you didn’t add it in."
I'm biased in this regard, because i love The Hobbit: An Unexpected Journey - Song Of The Lonely Mountain and The Hobbit: The Battle of the Five Armies - The Last Goodbye. Both have that "LOTR universe" ring to it, whereas Ed Sheeran - I See Fire doesn't (I hate it actually).

I expected nothing less from you Kerr =).

Congrats and keep it up =) Can't wait for BotFA - Arkenstone Edition

Well, the audio and video quality was very good, I don’t have issues with it. The editing, though, is where the edit really shines. Most, if not all, changes made to the movie were perfectly edited. The restored OST was awesome to hear. The only time it kind of bothered me was in the Smaug scene. More specifically, the rescoring over “You carry something” and the lead-up to it felt tacky. I think Jackson made the right choice to make it silent in this instance. In the original movie it felt tenser to me with just Benedict Cumberbatch’s awesome voice.

When it comes to the narrative, I have a few qualms. First and foremost: the love triangle between Tauriel, Kili and Legolas. Now I know love triangles in general are a plague among pieces of art and literature, and must be avoided; however in this case the love triangle is surprisingly very well executed. Also, it serves a greater purpose, which is Legolas’s character development.

He starts out as a racist towards dwarves, just like all the other elves in the Woodland Realm. Only Tauriel doesn’t seem to have this prejudice. She cares about other races, she doesn’t deem her race as better than all others, unlike Thranduil (“Other lands are not my concern.”) Throughout the two films we see Legolas’s admiration towards Tauriel, and his jealousy towards Tauriel and Kili's relationship affect his view on dwarves. We see him having this inner conflict throughout the two films. An example would be Thorin saving Legolas from orcs at the Forest River, then Legolas returning the favor at Ravenhill. At the end, the effect of Kili's death to Tauriel also affects Legolas after seeing her so distraught. Seeing Tauriel’s love to someone he deemed lesser than their kind, has made him reevaluate his views. You see: his platonic love for Tauriel, getting to know her philosophy, and seeing her fight for Kili the dwarf she loves, changed his views. He is now a changed man ("I cannot go back"). We see the continuation of this progression as if it was meant to be in the first place, with Legolas and Gimli's relationship. The biggest pay-off to this progression comes in Return of the King.

It's also worth pointing out that the love triangle is also representing the end of the hatred between the species, and bridging them together.

I’m going to get a bit critical here; I hope you don’t mind. Let me go step by step with the scenes you cut:

1. The exchange between Gloin and Legolas: This is not just a quick laugh and reference to a LotR character; it’s also a large setup and natural beginning to Legolas’ character development.
2. Two scenes of Legolas feeling jealous towards Tauriel and Kili (bickering between the three by the cells, and Legolas watching them from a distance): Like I said, we need to see Legolas’s love for Tauriel and how he watches her and Kili. It continues his arc; he’s trying to comprehend how Tauriel could love such a being lesser than them.
3. Tauriel and Thranduil’s talk about the spiders, which leads to talking about Legolas’s feelings towards Tauriel. This scene is important so we can get to know Tauriel’s world view and personality. She makes it clear here that she cares about the outside world; she can’t simply stand by in the Woodland Realm while the rest of the world suffers.

This also begins Thranduil’s arc that carries over to The Battle of the Five Armies. He begins as a dick who doesn’t care about the rest of the world, but in TBotFA, not dissimilar to Legolas, seeing Tauriel fight for what she loves, and his own son supporting her decision, makes him think about his ideals, and reevaluate them.

Again, this scene also adds context to the love triangle.

5. The orc interrogation: important for no reason other than serve the purpose of being the precursor to the next scene I’m talking about…
6. Tauriel and Legolas by the lake: Great stuff, they argue over their ideals, Legolas wants Tauriel to return and obey Thranduil, while Tauriel firmly states that she cannot sit idly by while the rest of the world needs help. In the end, Legolas’s love for Tauriel makes him agree to fight alongside her.

Keeping all these in mind, their appearance in Lake-town, the skirmish, and the healing of Kili is much more rewarding, necessary, and deserved. Unfortunately, none of this can be found in your fan edit. I realize this is done to keep the focus on Bilbo, but in doing so you have severely weakened both Tauriel’s and Legolas’s characters; now, they’re just there to kill some orcs. There is no substance left. Tauriel and Legolas suddenly appearing in Lake-town now feels extremely forced and undeservedly convenient.

I also had a different issue; there was a scene that you cut containing the dwarves seeing the Lonely Mountain up close. It’s a very emotional scene; the goal they’ve been talking about for two movies is ever so closer. They’re almost home. Plot-wise it may not be that necessary, but character-wise I think it’s essential.

One thing that stuck to my mind was the ring scene in Mirkwood. Seeing as the baby spider murder was (thankfully) removed, Bilbo’s reaction to the ring felt strange to me. I understand that the intent was to have the ring speak to Bilbo so it has a mysterious presence, the execution of this felt a bit off to me.

However I must concur that not much can be done about this, and it is better to have the ring mysterious rather than being blatantly Sauron’s ring or just a magic ring, the latter of which is because of the moment where Bilbo has to take the ring off in front of Smaug, which would not work as well if the ring wasn’t set up as mysterious. So in my opinion having this scene as odd as it may be, is better than not having it at all. Maybe if the ring’s voice is more clearly heard and just the part where Bilbo almost vomits is cut then this would be perfect.

Maybe I’d like to keep the spy network for Stephen Colbert, but I understand why it was cut. It’s fine by me either way.

Finally, I wish you had included the main Hobbit theme from An Unexpected Journey, but I understand why you didn’t add it in.

Outside of these few qualms and preferences, I think every single change was spot-on. For example, I thought deleting the two Master scenes wouldn’t work, but actually all we needed was presented to us with the Alfrid fish scene and the part before the dwarves ask for medicine. I also loved how Kili’s healing and Legolas’s fight with Bolg was intercut, plus the removal of Kili’s speech worked surprisingly good.

So yeah. I had a blast watching this. I’m very much looking forward to The Battle of the Five Armies: Arkenstone Edition.

Keep up the wonderful work!