Brief Synopsis:
A less bloated, better-paced and more character-driven introduction to Peter Jackson’s vision of Middle-earth. Most of the fat has been trimmed, while still keeping all the characters and plot points that will have some bearing on the next two films.
Intention:
I was always planning on editing PJ’s hobbit films once all three were released, but with the premiere of “The Desolation of Smaug” coming up, I figured it could be fun to release a stand-alone edit of “An Unexpected Journey” as well. Since I want this edit to fit perfectly with the next two films, this is by no means a purist cut – I’ve instead tried to improve on the story that Peter Jackson is telling. My goal has therefore been to tell the best possible story within the limitations of not cutting anything that might become important in the next two films.
Other Sources:
The Lord of the Rings: The Fellowship of the Rings (Extended Edition)
The Lord of the Rings: The Two Towers
The Hobbit: An Unexpected Journey Soundtrack
The Lord of the Rings: Battle for Middle-Earth (Video Game)
The Elder Scrolls V: Skyrim (Video Game) 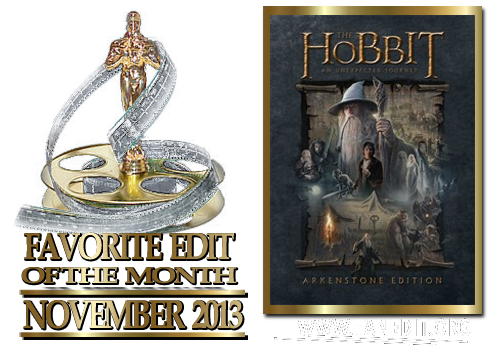 Release Information:
Editing Details:
In the making of this edit, I have followed three basic principles:

-This should be Bilbo’s story. The theatrical version tends to lose sight of its (purported) main character quite often, so I’ve tried to focus the story on Bilbo as much as possible. If a scene doesn’t serve Bilbo’s story and is also not absolutely necessary for the overall plot, I’ve cut it out. Among other things, Radagast’ first scene, the stone giant scene, and the chase scene through Goblintown have been removed in this edit.

-This should be the first chapter in PJ’s Middle-earth hexalogy. PJ relied a bit too much on the audience’s familiarity with the LotR films, so AUJ feels too much like a prequel rather than a proper first chapter. Frodo’s cameo is a good example of this, and is one of the things I’ve cut out completely. PJ also decided to reuse a lot of music from the LotR films, rather than using the new stuff that Howard Shore recorded. In order to give AUJ its own identity, I’ve restored as much as possible of Shore’s original score.

-This should be fully compatible with the theatrical versions of the remaining five Middle-earth films. As much as I would like to remove stuff like Azog, Radagast and the White Council entirely, every character or plotline that has importance for the next two Hobbit films has been kept. In some places I may have played it a bit too safe, but at least I’m almost 100 % certain that I haven’t cut anything that will come into play later on.

By following these three principles, I think I’ve created a much stronger and more enjoyable version of this first Hobbit film. 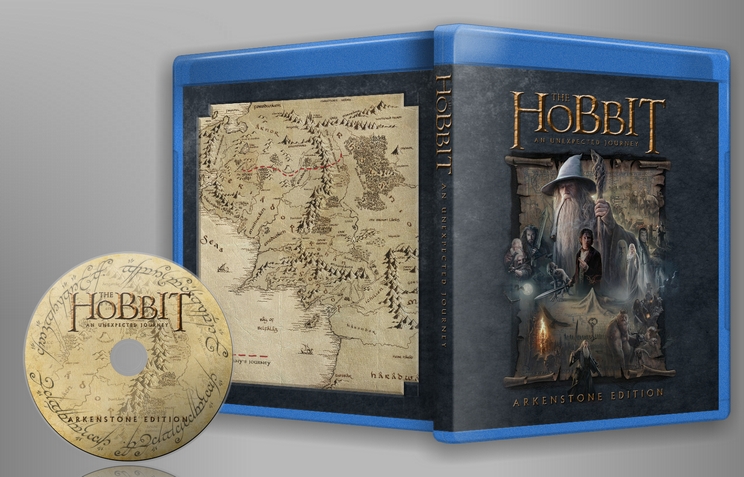 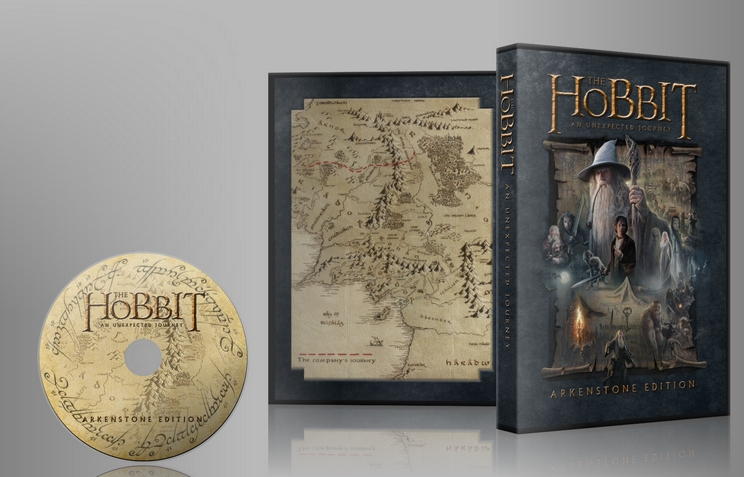 31 reviews
9-10 stars
87%
7-9 stars
13%
5-7 stars
0%
3-5 stars
0%
1-3 stars
0%
Overall rating
9.5
Audio/Video Quality
9.8(31)
Visual Editing
9.9(31)
Audio Editing
9.5(31)
Narrative
9.5(31)
Enjoyment
9.4(31)
View all user reviews View most helpful
January 03, 2021 (Updated: January 03, 2021)
Overall rating
9.8
Audio/Video Quality
10.0
Visual Editing
10.0
Audio Editing
10.0
Narrative
9.0
Enjoyment
10.0
While many editors try to turn the Hobbit trilogy into one or two movies, this edit makes the case that these movies can shine individually. Indeed, by trimming some of the bloat, Kerr has revealed the gem of a film underneath. This version of an Unexpected Journey is a tight adventure with strong performances and clear character arcs. Highly recommended.
O
octoroxx Top 500 Reviewer 16 reviews
Report this review Comments (0) | Was this review helpful? 0 0
September 14, 2018
Overall rating
9.8
Audio/Video Quality
10.0
Visual Editing
10.0
Audio Editing
8.0
Narrative
10.0
Enjoyment
10.0
Pretty much the best. I admire the effort put in by many to morph the Hobbit films into a single film, or two film structure, but to me it should be a trilogy. It's clear from The Appendices that Jackson and co. made many changes to make the films work as three instead of two and so I prefer watching them as a trilogy, and Kerr's edit is a fantastic way to do that. The theatrical (and extended cut) cut of Unexpected Journey can be a slog, but this edit breathes new life into it. Kerr has managed to keep the structure of the film intact while making it all run so much more smoothly. Maybe my favorite element of the edit is the score replacement. In the Jackson versions, villains' leitmotifs from the Rings trilogy will play over scenes of heroes, but there is none of that here. Shore's original music, actually written for this film, finally plays in the places it belongs. I will briefly mention that the score is mixed a bit too high in some of the opening scenes, but this is really a minor quibble. This will definitely be making its way into my Unexpected Journey blu-ray case. I highly recommend even the most skeptical Hobbit fans to check this version out. Can't wait to check out the next two Arkenstone Edits.

Do you recommend this edit?
Yes
Format Watched?
Blu-Ray
W
whyisntthatcool Top 1000 Reviewer 3 reviews
Report this review Comments (0) | Was this review helpful? 2 0
September 09, 2017
Overall rating
10.0
Audio/Video Quality
10.0
Visual Editing
10.0
Audio Editing
10.0
Narrative
10.0
Enjoyment
10.0
I greatly enjoyed this fanedit, it had been sitting waiting to be watched for a couple years for a number of personal reasons and today I finally decided to go ahead and watch it.

It is edited perfectly, everything is seamless. Superior skill is shown by Kerr. It being available in HD is most welcome.

Narrative wise, it provides a very lean and entertaining take compared to the bloated and honestly boring original cut.

Kudos!
H
havok1977 Top 50 Reviewer 122 reviews
Report this review Comments (0) | Was this review helpful? 1 0
February 18, 2016 (Updated: February 18, 2016)
Overall rating
9.9
Audio/Video Quality
10.0
Visual Editing
10.0
Audio Editing
9.0
Narrative
10.0
Enjoyment
10.0
This edit without a doubt saves a bloated and childish film that was full of potential, tranforming it into one that I can truly enjoy. Where the original's poor pacing and seemingly conflicted intentions with regard to tone and audience caused what great stuff there was to get somehow lost in the mix, this version flows and carries you along on a wicked ride. Kerr demonstrates a greater understanding of what was needed in this film, using scenes from the EE which greatly enhance the narrative while drastically trimming plenty that made it into theaters. Radagast is an excellent example. By omitting his introductory scenes, the awkward humor, and Saruman's full verbal laceration of the character, he now seems quirky (although not annoying), and like someone who you can actually believe as a wizard.

Kerr's use of Howard Shore's original soundtrack also hugely enhances the whole experience, providing us with more appropriate accompaniment at almost every turn, and making you wonder how the editors thought reusing so much of the soundtrack from Lord of the Rings in favor of original themes composed for this film would be better. There are four exceptions to this however (all near the end of the film) where the change of music was jarring and/or detracted from my experience. The first is using a different version of the ring theme. The original used the same version as TLOTR which I feel both sounds better and is more thematic in this case. Likewise the eagle theme which he uses for about twenty seconds before changing to a new piece is so associated with those eagles in my mind that using anything other strips the scene of all its beauty. Third, for Thorin's charge on Azog he replaces the Nazgul theme from fellowship (epic, but very out of place) with one which I think he took from Skyrim. This sounded out of place and simply didn't work for me. Better I feel to have kept the Nazgul theme, despite the anti-thematicness. Lastly atop the Carrock when Thorin wakes and the audience is meant to be unsure whether Thorin will rebuke or thank Bilbo Kerr has used a theme which he accented to the scene beautifully and I think was much better, all except for the fact that its tone makes it clear in no uncertain terms that Thorin will not rebuke Bilbo as the scene intends you to fear. Sadly, that seems a deal-breaker for me.

All-in all a Masterpiece of an edit that will leave you exasperated with the original editors and sympathizing greatly with the time pressure everyone involved had placed on them. Personally I would add (and have done so myself) the Old Took's birthday party scene from the EE because it creates a much warmer introduction to the Shire scenes, and better establishes this young Bilbo Gandalf repeatedly recalls in later scenes. As well as Gandalf's concerns about the dwarf rings and mention of Thrain during the White Council - as this leads directly into a plot line from DOS that Kerr was, at the time of this edit, unaware of.

Do you recommend this edit?
Yes
Format Watched?
Digital
G
galadantien Top 500 Reviewer 25 reviews
Report this review Comments (0) | Was this review helpful? 1 0
February 02, 2016
Overall rating
9.0
Audio/Video Quality
9.0
Visual Editing
9.0
Audio Editing
9.0
Narrative
9.0
Enjoyment
9.0
Professionally done. This is a great alternative to the original movie. My issue with the original movie was that sometimes it feels like we jump from a movie to a video game (stone giants, goblin town escape sequence). Radagast also had too many silly moments and his original introduction scene felt like we suddenly jumped to Narnia. All that and more was improved by this edit.

Another major improvement this edit has to offer is the sound editing and some alternative soundtracks (Thorin vs. Azog and eagles rescue scenes, especially) which work incredibly well.
I think, the minor negative I have in this regard is the missing sound piece from the scene when Gandalf breaks the rock to reveal sunlight on the Trolls. I liked that scene, as it originally was, with the Trolls' response to Gandalf.

Overall, it's an awesome work with a lot of heart put into it. This should have been the movie released in theaters.
Well done, Kerr.

Do you recommend this edit?
Yes
Format Watched?
Digital
B
belgarath Top 500 Reviewer 16 reviews
Report this review Comments (0) | Was this review helpful? 1 0
View all user reviews