- Removal of T-X’s line “I like this car.” A reference to T2′s “Say, that’s a nice bike,” but it gets annoying because she says it again with police officer a scene later. Here, T-X just kills, and doesn’t say unnecessary lines to insignificant persons. She’s a cold blooded killer now.

- Removal of the growing T-X’s breasts. In the T3 novelization it makes a bit sense, since she lures the cop with her breasts into an alley to kill him out of sight (but still, why lure the cop out of sight to kill him while a scene later you just brutally shoot a kid working in a drive-in in public?). However, since the alley-sequence does not happen in the movie, this is just a very lame example of T-X morphing-abilities. She’s a cold blooded killer, not some cute sexrobot.

- Removal of T-X’s line “I like your gun.” As explained above. Now it is only hinted that the T-X will take the gun one way or another.

- Removal of T-850′s line “Now” when he moves forward to speak against the stripper’s hand. Pathetic scene in which is shown that the Terminator does not know human gestures. It’s an infiltration unit, so it should not bow over to literally talk to the hand.

- Removal of the pathetic “Elton John sunglasses” scene. Terminator just walks out of the bar, stands still a second (to take a look at the offscreen parked cards) and then we cut to Terminator slamming the window.

- Removal of T-850 synchronizing his internal clock with the watch. Although it’s an awesome scene and idea, this sequence causes more confusion than it clears things up. The order of dates that appear is not chronological, so we are still left to guess which date is really is. Also, the Terminator finds the watch hidden behind the sunvisor. Since he immediately checks the sunvisor, this shows that the Terminator is either more sophisticated/updated, or understands more of human habbits. Now this is removed.

- T-X just goes into the driveby and shoots Jose without even asking his name or checking him via her TermoVision. She just brutally shoots without a known reason for the audience yet, just like in the first Terminator movie. Why ask for names if you can already identify your target via an iris (or DNA) scan?
Same goes for Bill Anderson. T-X arrives at his house and just slams him to the ground and shoots him. This is also more like the style of the first Terminator movie. Although we have seen the T-X connecting to some database, she is just killing unknown persons while we are left to guess why at the moment.

- Removal of T-X’s sampling the cat lady’s blood and her reaction “No.” First of all, if it’s the target the T-X is looking for, she wouldn’t say “no” to herself but just continue looking for her target. Second, the T-X sampling someone’s blood is shown in a scene later in which she samples John Connor’s blood. Redunancy thus…

- Removal of T-X’s orgasmic reaction after sampling John’s blood. Wasn’t my comment about the T-X being some kind of cold blooded killing machine instead of robotic sextoy not enough?
Kate doesn’t drop the keys (such a Hollywood clichÃ�), the T-X is right at her when she jumps in the Tundra. This makes the T-X a more dangerous Terminator than she was portrayed in the movie. Like the Terminator says later on in the movie: “T-X is faster, more intelligent and more powerful.”

- Added shot of the T-850 grabbing the shotgun out of the truck at the vet.

- Removal of the line “I lied.” T-850 needs the time to save John, so why bother having a conversation with Kate when you know that you will need all the time in the world to save the person you are programmed to protect.

- Removal of T-X double checking when she notices the T-850 is driving his firetruck next to her crane. She only looks one time at him and immediately notices him, which makes her more menacing.

- Removal of T-850′s line “Excuse me” to the T-X, before striking his axe into her neck during the crane chase. Silly line, a Terminator would never say something like this in the heat of a battle. T-X just notices the Terminator now.

- Removed the ridiculous conversation:
John Connor: “So, she’s an anti-Terminator Terminator? You’ve got to be shitting me.”
T-850: “No, I am not shitting you.”
And you wonder why Terminator wasn’t taken seriously…?

- Removed T-850′s second “Relax”. The T-850 looks so out of place with that movement. Kate’s screaming can be heard when the Tundra drives away from the explosion.

- Removal of “Talk to the hand.” The Terminator just stares blankly at the guy (and ignores him).

- Alternate conversation between John and Kate in the back of the van, together with a future flashforward. No silly lines like “Jerky?” or “What are you, some kind of gangmember?” John uses the Mike Kripke’s conversation now as icebreaker to Kate. Also, the future war scenes have a meaning now, and a reason to atsppear. Not unlike the official cut, in which they are just random (meaningless) future war scenes (with great special effects) as opening. The added song that accompanies the future nightmares is: Dead Can Dance - The Host Of Seraphim.

- Removed the T-X killing Scott. Now we don’t know that the T-X has mimicked Scott’s appearance. This is more like T2 style, and creating a surprise effect later on when Scott suddenly kills the police officers.

- Removal of the T-850′s line “Don’t do that” after being shot in the mouth by Kate. It hints that the T-850 has a real personality (which also appears later in the movie, when he corrects John who calls him a robot instead of a cybernetic organism). And would a Terminator tell the one he should obey not to do something? Another fact is that Kate now fully realizes that this man is not human, and this shock has more impact to her. The removal of
- John telling her that it is a machine, during the conversation in the back of the van, adds now more perspective, because Kate didn’t know that it was a cyborg when she accidentally fired the gun in Terminator’s mouth.

- Added two short alternate scenes of the T-850 firing his gun while holding the coffin.

- Removed storyline of John and Kate’s children, or that Kate will even turn out to be John’s spouse. This romantic stuff has been trimmed down heavily. The only hints for a possible future relationship are the Mike Kripke’s conversations and the couple holding hands at the end of the movie.

- Removed Kate’s line “Do something” while the T-X attacks the hearse. Like if the Terminator doesn’t understand that his mission objectives are in danger and that he needs to act.

- Removed human pair bounding scene. Instead the next sequence is shown:
Added CRS promotional video. A nice reference to T2′s Cyberdyne Systems. Sgt. Candy does not make his appearance. I didn’t like the fact that CRS was alreadymaking the Endoskeletons in the present, this was supposed to happen in the future by SKYNET. And ofcourse the fact that Robert Brewster sees this video and does not refer to the T-850 as Sgt. Candy later on. Besides, this video trims down the darker movie I wanted to edit, and showing the full Candy video would only make it more comical.

- Removed the T-850 correcting John after being called a robot instead of a cybernetic organism. Again, it looked like the Terminator had a personality and needed to stand up for his ego.

- Removal of Kate’s first kiss conversation. They now have some kind of short giggle.

- Removal of short conversation about Kate’s role in the future (being second-in-command and being John’s spouse).
“She’ll be back” video-sequence from the first trailer, so it has more impact.

- Removal of Kate’s pathetic line “Just die you bitch,” during the particle accelerator escape. That line came suddenly out of nowhere, like Kate suddenly needed her own one-liner.

- In the CRS fight, the T-850 slams the T-X with some kind of gas canister, and she spins her head. I have removed that bit. It focusses a bit more on the action and not the T-X’s “I’m far more superior than you”-look.

- Added a shot of John and Kate dodging some flying piece of debris at Crystal Peak after the T-850 crashes in.

- Alternate music during credits. Only Marco Beltrami music, and most of it was missing from the official cut. Songs have been mixed into 1 mix/suite:
1. Terminator Theme
2. JC Theme
3. A Day In The Life (edit)
4. T3 Reprise (for the next change:)

- Future war clip after credits, so the audience will know that the hardest battle is not over, but has yet to come. 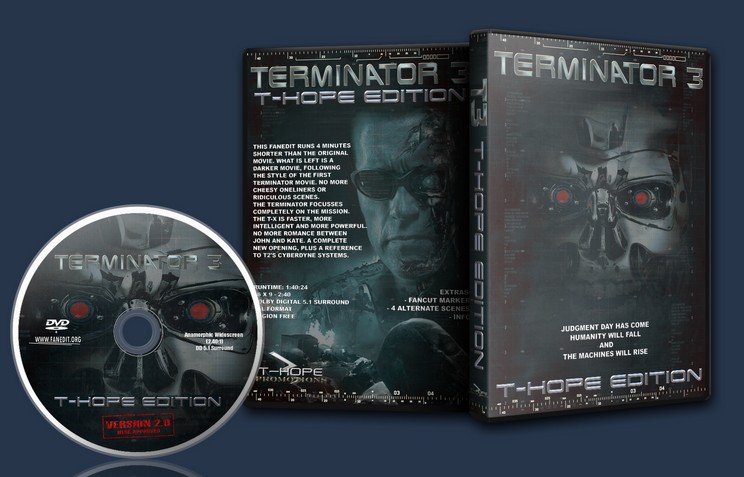 *This rating was given before reviews were required*
C
cap Top 1000 Reviewer 3 reviews
Report this review Comments (0) | Was this review helpful? 0 0
View all user reviews