Star Wars: Rise of the Empire

Brief Synopsis:
This combines all the Star Wars prequels to one epic watching experience, heavily trimmed to a complete and more serious movie. Many of the more painful aspects to the trilogy were removed. The fanedit focuses on the story back on Palpatine’s orchestration of events.
Intention:
to remove many of the more painful aspects to the trilogy and focus the story back on palpatine’s orchestration of events.
i started this edit way before i even knew about fanedits, and i learned a LOT in the meantime.
unfortunately this means i had to do many things over, and even now it’s not perfect. there is some weird artifact-ing
going on, and it’s not anamorphic widescreen… but i’m just tired of working on it… lol i hope you guys will
like what i’ve done with the story and the characters.
Release Information:
DVD
Cuts and Additions:
there are around 300 cuts in this edit, and it’s impossible to list them all, but i’ll do my best to list the biggest changes.
-New Title & opening scroll
-gungan speech has been altered & subtitles added
-we briefly see the gungan city, but the rest of their visit is cut, as is the planet core
-last bit of waterfall deleted scene is inserted, only part showing them entering palace
-R2D2 and C3P0 show up in a couple places, but are not referenced and almost never speak.
-many many dialogue cuts, including most of jar jar’s & anakin’s lines in EP1.
-no virgin birth
-all sequences with other kids on tatooine are gone.
-all references to midichlorians are gone
-almost all of the lead-up to the podrace stuff is gone
-entire podrace sequence is about 5 min long
-anakin does not build C3P0
-the deleted sequence with the probe droid is inserted
-almost all references to chosen oneÂ� and prophecyÂ� are gone. The only 2 left in trilogy are when qui-gonn dies, and when ob1 screams it at anakin at the end of the last fight. I wanted to make it as if it was something qui-gonn said to ob1 right as he died, and ob1 kept it to himself all those years, and then it finally burst out of him at the end.
-no discussions about whether anakin should be trained or not.
-no visit to the gungan hideout, no begging for help… as far as we know there are no problems between gungans and that naboo.
-removed much of jar jar/gungan & anakin lines from final battle.
-removed ending celebration scene for EP1
-removed all of opening landing/explosion scene
-added amidala addressing senate deleted scene
-removed last half of scene in palpatine’s office
-removed all of meeting amidala scene in apartment
-removed all of night apt scene, assassination attempt, and subsequent chase
-removed most of council meeting following assass. Attempt
-removed scene with yoda, ob1, & mace walking/talking in jedi temple
-added jedi temple droid analyzer scene
-removed scene with anakin & padme packing to leave, and departure scene
-added hangar scene with mace where ob1 leaves for kamino
-removed talk aboard freighter
-removed arrival scene on naboo, created montage to show arrival on naboo
-removed anakin padme meeting with queen
-removed sandÂ� talk and arrival at lake house
-removed picnic scene
-jango fett now is never heard to speak, and never is seen without helmet, he is just there and does what he does.
-boba fett is completely removed
-removed dinner floating fruitÂ� scene at lake house & fireside chat afterwards
-removed count dooku from the entire trilogy, and all references to him
-removed workshop scene at skywalker farm, inserted some lines into yoda meditation scene
-removed droid factory scene
-removed execution scene
-removed entire EP3 opening battle sequence, fights, landing, etc. (yeah, i’m going to get yelled at for this, it looked cool… but really it served no story purpose, was just a way to get a big battle in somehow)
-removed scene after landing with politicians greeting them
-trimmed most of grievous’ lines (that voice actor was atrocious and his script was worse)
-removed balcony scene before dream (padme looked kinda creepy in that one for some reason)
-added all of three seeds of the rebellion scenes
-added the scene of mace, ob1, & yoda discussing in meditation chamber (trimmed for redundancy)
-removed almost all of palpatine fighting the jedi who come to arrest them. He jumps up to face them and then it cuts so you don’t see the pathetic way the other jedi die. The rest of the sequence follows from anakin’s point of view, so the next time you see mace/palpatine is when anakin runs in and palpatine is laying down in window with mace over him.
-removed scene of george lucas’ son putting up a better fight than all the jedi masters combined
-removed scene of yoda & ob1 fighting their way into the jedi temple (yes it was cool, but i wanted to make it so the first time you really see yoda or palpatine fight is when they fight each other)
-yoda doesn’t get blasted by a lighting bolt from palpatine that he should have seen coming a mile away
-anakin & ob1 don’t stop to chat right before the end of the fight. Ob1 jumps up and anakin jumps up right after him.
-removed NOOOO in birth of vader scene, and conversation about padme
-removed netherworld talk between yoda & ob1
-added yoda arriving on dagobah
All in all the edit runs about 4 hours, including all 3 sets of credits that run at the end. That makes for about 3 hours that i cut from the trilogy. (more than 1 entire film)
Here is the breakdown for the episodes…


The edit is spread across 2 discs…. EP1 & 2 run back to back on the first disc, and EP3 & the credits is on the 2nd disc. There are scene selection menus and the trailer on each disc.


As i said, there are far too many cuts to list them all, roughly 300. so there are many many dialogue cuts that i didn’t list…. and when i said something like dooku is goneÂ� i did not bother to list all the subsequent scenes that were removed because of that. 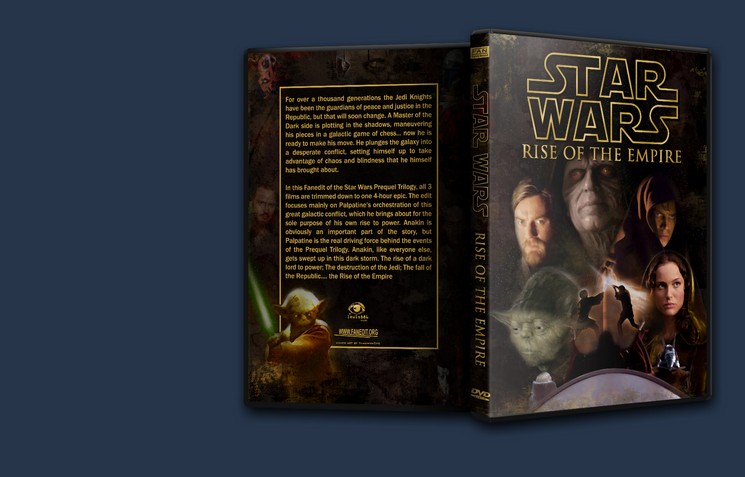 10 reviews
9-10 stars
10%
7-9 stars
20%
5-7 stars
70%
3-5 stars
0%
1-3 stars
0%
Overall rating
6.6
Audio/Video Quality
6.5(2)
Visual Editing
7.0(1)
Audio Editing
7.0(1)
Narrative
5.5(2)
Enjoyment
6.8(10)
View all user reviews View most helpful
October 18, 2012
Overall rating
6.8
Audio/Video Quality
7.0
Visual Editing
7.0
Audio Editing
7.0
Narrative
6.0
Enjoyment
7.0
to lewis866. this is the first fan edit of the prequels that i have seen, but i think you delivered a great edit for what most people who hate jar jar and "annie" would have wanted. however, i really can't believe you spent over a year working on this, when the video quality is so poor, even for dvd. plus splitting it onto two dvds was a really bad idea, as it interrupted the flow immensely, especially having to watch your warning and lucasflim logo again. at the quality it was at, it could have fitted onto one disc. also, there are moments where the story jumps too far without enough explanation, like the arena battle in episode two. it just happens. as for jar jar, his subtitles could have been more menacing, giving the film an edge that the kiddie shelf originals didn't have. for example, there was no reason for him to discuss his father, since we don't really care who the senior gungan is. it would have been better if jar jar was screaming to spill the blood of the invaders, or something and his "father" later calling for death to the...er... droids? actually, it only occurred to me while watching your edit, that only real casualties in the "clone wars" were clones and droids - both of which are made in factories, so who cares if the get killed? still, a vast improvement on what that twat lucas did.

*This rating was given before reviews were required*
B
boon23 Top 10 Reviewer 154 reviews
Report this review Comments (0) | Was this review helpful? 0 0
View all user reviews