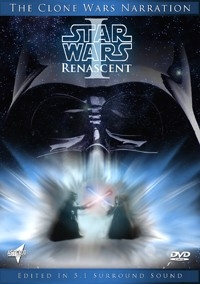 Join the Forum Discussion
Tweet
Brief Synopsis:
“Star Wars: Renascent” is the first of a three-film fan-edit which tells story of Luke and Anakin Skywalker, simultaneously. The three films will mainly follow the storyline of the Original Trilogy and will have flashbacks to the Prequel Trilogy. It will feature new scenes, altered story lines, and will also feature some new music, which is why it’s a rebirth or a Renascence. This project was first started by two other fan-editors and it is being edited off of the DVD release of the Prequel Trilogy and adywan’s edits of the Original Trilogy.
Intention:
The first film in the ten-hour epic follows Luke Skywalker as he first steps off Tatooine and into the world of the Force to become a Jedi while contrasting his father, Anakin Skywalker’s early life and the beginning of the legendary Clone Wars.
Special Thanks:
All of the posters over at the OT forums who helped make this edit what it is. (You know who you are! :) )
Release Information
NTSC DVD-9
Special Features
Special Features disc includes a 30 minute Prologue from Star Wars: Reborn, Trailer for Star Wars: Reborn, Trailer for “Empire Strikes Back: Revisited”, and the previews posted online from “Star Wars: Renascent”. The Bonus Features disc also includes a digital copy (in WMV) as well as DVD Covers and Posters.
Editing Details:
The edit will have scenes flashing back and forth in vectors contrasting similar scenes based on events and emotions. Some scenes will be slowed down to enhance their emotional impact.
Cuts and Additions:
There are hundreds of cuts, insertions and changes to these films, including (but not limited to) Leia kissing Luke, Han and Chewie’s run-in with the Storm Troopers, the entire Kamino subplot from AOTC, love scenes have been condensed into a montage, the celebration scene from SW and the wedding from AOTC were also cut.
Cover art by Asteroid-Man (DOWNLOAD HERE) 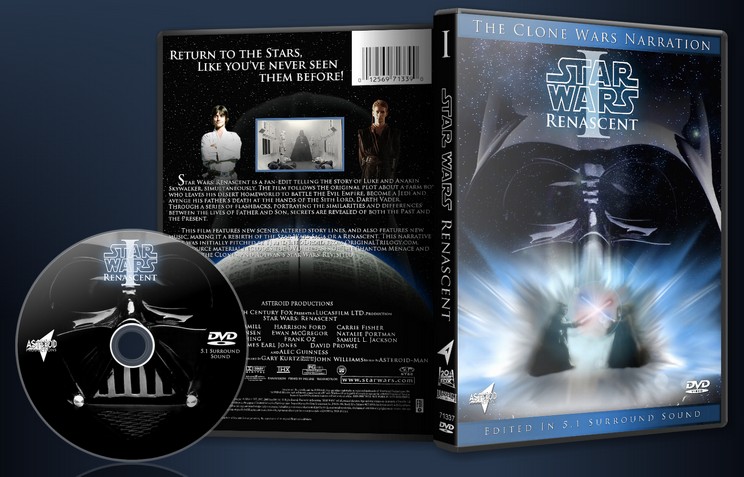 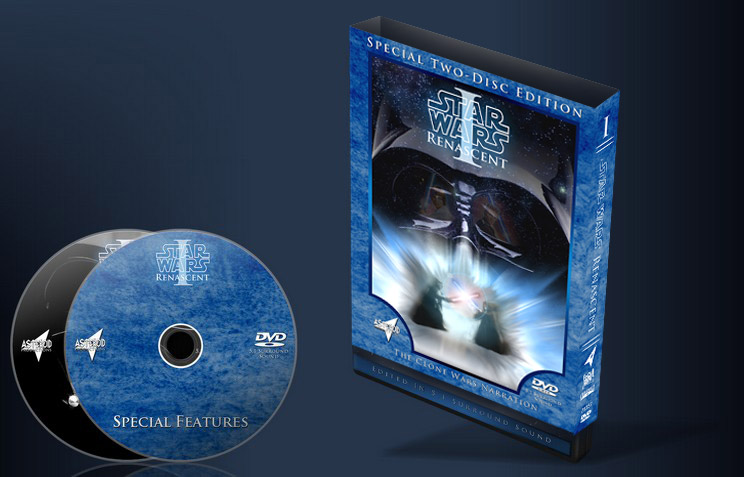 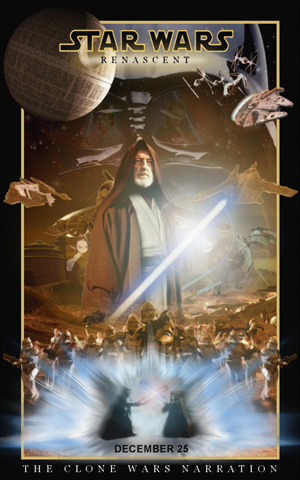 Pretty much everything that smithers said, although since I'm reviewing this a few years later, the A/V quality stands out as worse than it did back then. I frankly couldn't sit through this whole thing but I watched enough of it to get the gist, the concept is very cool, and the visual editing is fine, but the audio editing and mixing/leveling is terrible, the A/V quality should not be this bad even for a DVD file, the narrative is a little messy but still "cool", and I didn't really enjoy it, but it was conceptually cool so I'd rank that right down the middle.

Star Wars Renascent looked pretty awesome, it's quite an ambitious project, and it fails. I tried to like this edit, I really wanted to but I just couldn't. Out of place music and strange places in which it switches between movies were just weird. Using Adywan's revisited version of ANH was a good idea, but sadly that means many stupid special edition changes were still left in. AOTC remained as horrible as ever, leaving in atrocious dialogue in and keeping as much Jar Jar and shitty romance as possible, why?! Scenes intercut before they've actually played out, leaving many sequences with no resolution or outcome and just moving on to the next one after the occasional flashback. AOTC looks so much different than ANH and it stands out horribly, especially when deleted with incomplete CGI is used and it looks even worse than it already does! The tone and feel of AOTC and ANH clash and don't blend well, everything is just confusing and in your face. I feel like the only intention of this edit was to say "Hey look! AOTC completely ripped off that scene! Let's glorify obvious poorly done throwbacks and unoriginality!"

The audio quality is fine, nothing fuzzy or strange. The video quality on the other hand is terrible, this is a DVD9 folder, it should not be a grainy 480p video.

Visual editing was alright, though many times when it suddenly cut to flashbacks it seemed quite jarring. Many intercut sequences were awkward like Shmi, Uncle Owen and Aunt Beru's death. Strange color correction decisions were also very distracting, even when they were supposed to invoke emotion they just seemed flashy and pointless.

Audio editing... oh boy. When music was introduced into scenes it seemed to dominate the characters' voices, this was very apparent in the elevator scene with Obi-Wan and Anakin. So much of the music was very out of place and didn't feel like star wars. The death of Anakin's mom and Luke's uncle and aunt was a good concept but didn't play out well due to sudden changes in musical scoring and all sound effects disappearing were extremely distracting.

Over all, this is ANH: Revisited with some of the worst clips from AOTC cut into it. This does not provide an entertaining experience, it shows how far off the prequels are from the original trilogy.

The new score, when present, changes the tone of the movie. The music turns familiar scenes sublime, now oozing with depth and gravitas. A few scenes become art-house sci-fi, in a good way, solely because of the musical changes. Same dialogue, same visuals, but a different emotion runs through them, sometimes powerfully. This alone is reason enough to see this cut.

I really liked the discussion @ Ben's desert abode. The PT flashbacks were spare; that scene was cooked just right (aside from some sound issues, which others have mentioned).

Kenobi's death scene and aftermath were beautifully scored and conveyed greater emotion than in the original film.

When used briefly in flashback sequences, parts of the prequels come across brilliantly. No longer do these scenes get a chance to smear nonsensical poo all over this fable; they're present long enough to emote or provide exposition, and then they're gone.

And Anakin's and Padme's clunky romance is mercifully condensed, making it more believable. Still hokey, but, hey, Asteroid Man's not to blame.

But then there are prequel scenes that go on too long.

I understand that the intention of the edit is to present two parallel stories, those of Anakin and Luke. It's almost too balanced in presenting both of their stories, and therein lies a significant fault. Luke's story of departure and adventure is simply compelling; Anakin's whining, sexual creepiness, and fascist politics are not. Although Asteroid Man doesn't state his intention was to provide an episode-IV-centric story admixed with tiny bits of episodes I through III, one can't help but think that that approach might have provided a leaner, more potent cut.

The parts of the PT that should have been kept were those necessary for storytelling. Action sequences from the PT, for the most part, aren't necessary to ground the events that happen two decades later. From the perspective of the original trilogy, is it necessary to know the particulars of Padme's assassination attempt, or the silly chase that ensues?

Even though I'm biased toward the OT, I felt there were some episode IV scenes that could have further trimmed. The boarding of the rebel ship near the start of the movie, as well as the on-ship battle that followed, could have been cut drastically. The trash compactor scene shows the heroes' teamwork and was an iconic part of a stand-alone movie, but in a hybrid movie that scene is unnecessary, as it does little to advance a broader narrative.

Sometimes the blending of the two stories works really well. Luke's discovery of his dead aunt and uncle, and Anakin's discovery of his ravaged mother (the last-minute nature of his interest which I thought was ridiculous in the studio version) are interweaved neatly. However, in the second half of the edit, this interweaving creates multiple climaxes, and I began to wonder when it would end.

Summing it all up: I was hoping for a blazing two-thumbs-up experience, as suggested by the trailer, and at its best, this edit is hauntingly evocative. More of this stuff, and I'd be totally pumped to see Asteroid Man's renascent versions of episodes V and VI. For much of its lengthy run time, though, Star Wars: Renascent made me feel as though I was watching a mere mashing together of episodes IV and II.

I have to write that I really love the concept.

My only problem with it is the music is too loud when Obi-Wan explains to Luke how his Father died, maybe the volume should be tone down by a quarter or less than half. I enjoy the new choice of score but it needs a more subtle approach. Just my two cents here.

I adore the fact that you add the Imperial March theme when Vader appears or when Star Destroyers are flying around the Death Stars.

The concept is great. I also appreciate the AOTC moments more, and the romantic montage between Anakin and Padmee is more efficient here.

Keep up the good work.