Brief Synopsis:
This SW Eps 1 fanedit takes from all so well known fanedits the best and combines these ideas to one great watching experience.
Intention:
This film seemed to be decently edited, with most of it’s flaws being conceptual. But other than that, what we’re given plays out well on it’s own. Most of the edits are for pacing, as well as removing junk that takes the focus off the main characters and plot development. And of course, many of these changes have been made in almost all other fan edits. This film has been “fan edited” the most.
Additional Notes:
This is an old edit, done in 2007ish. You are probably looking for the newer one, Cloak Of Deception.
Release Information:
DVD
Cuts and Additions:
- New opening crawl, thanks to Rebel11_38
, - Removed lots of Panaka's bad one-liners
, - Removed Jar Jar's complaining before boarding the bongo
, - Removed the second half of the planet core sequence, and the redundant Nemodian/Sidious scene caught in the middle
, - Removed the battle droid's line to Qui-Gon
, - Removed the scene of Padme cleaning Artoo with Jar Jar
, - Changed some of the subtitles
, - Trimming a few bits of the Anakin meets Padme scene, also removing Jar Jar's encounter with the pit droid
, - Removed Jar Jar talking to Qui-Gon about being "robbed and crunched"
, - Removed lots of Jake Lloyd-isms
, - Snipped the scene with Anakin's "friends" laughing at him, and Jar Jar's toungue getting fried by the power couplings (Thanks to Adigitalman!)
, - Shortened the podracers grid sequence, somewhat similar to the theatrical release
, - No farting pack animal (thanks to Adigitalman!)
, - Shortened the podrace, snipping just about all DVD additions and more, adding only the repair droids
, - Added a new score to the podrace! Inspired by MagnoliaFan before me, I used the Beggar's Canyon Chase from the Shadows of the Empire CD and The Battle of Yavin
, - Added the Greedo deleted scene (Thanks to Adigitalman!)
, - Added in the probe droid deleted scene (Thanks to Adigitalman!)
, - Removed the Air Taxi scene
, - Palps doesn't refer to Amidala as 'recently elected'
, - Removed a lot of Jar Jar silliness during the battle scenes (Partially using Adigitalman's footage)
, - Removed lots of Anakin stuff too, during the battle scenes, although he still flies on autopilot (Partially using Adigitalman's footage)
, - Trimmed Qui-Gon's last words, and had Obi-Wan's talk with Yoda be similar to MagnoliaFan's to make it seem like Obi-Wan voulintarily trained Anakin
Cover art by UseYourIllusionII (DOWNLOAD HERE) 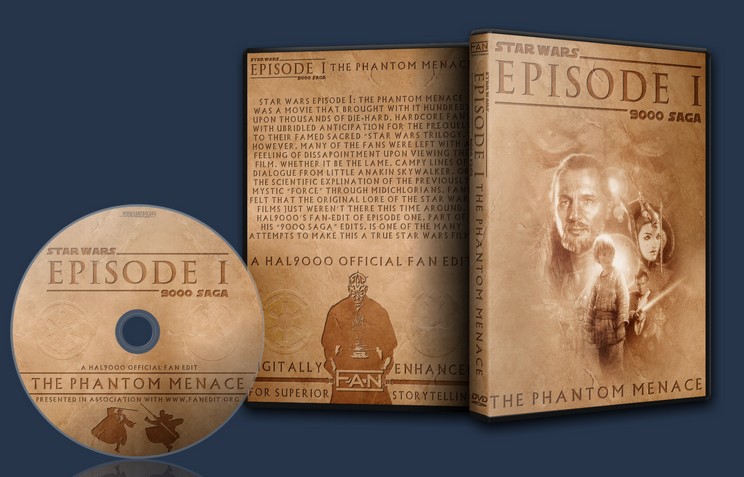 To put it bluntly, it just doesn’t cut enough. There is still too much Jar Jar, too many Jake Lloyd lines and what exactly was your thought process in leaving Midichlorians in there? 1/2 hour into the movie, I still want to vomit. CUT MORE!!!
B
buddythegoon Top 500 Reviewer 18 reviews
Report this review Comments (0) | Was this review helpful? 0 0