Brief Synopsis:
The second of the revamped '9000 Series,' The Approaching Storm delivers a re-crafted perspective on Star Wars Episode II in keeping with the drive of the original trilogy of films. Unnecessary 'galaxy shrinking' cameos from classic characters have been cut-down or removed. Anakin and Padme are depicted as realistic adults developing romantic feelings for one another. The political plot is made more straightforward and graspable. Superfluous action is subdued to make the film more story driven.
Intention:
By stripping away extraneous tangents and bolstering attention to character development, this edit seeks to improve the original film. The original trilogy is regarded as the template toward which the prequels strive. The prequels are made to submit to the continuity and drive of the originals to the degree possible.
Additional Notes:
I could not have done this without the prior fan editors who have tackled this film, including Slumberland, L8wrtr, Q2, T528491, JasonN, The Phantom Editor, TM2YC, Seciors, MagnoliaFan, ADigitalMan, Spence, Father Merrin, Sithlord, and Diamond Wan. This edit is an update to Attack of the Clones (9000 Saga).
Special Thanks:
Seciors
L8wrtr
TV's Frink
Hundsdorfex
DominicCobb
Kerr
MrBenja061
Jackpumpkinhead
Emanswfan
OnlyOneKenobi
Smudger9
DrDre
Schorman
Erik Pancakes
Sir Ridley
NeverarGreat
Release Information:
Special Features
Fan editor’s commentary track.
Subtitles in English, Spanish, and French
Editing Details:
The following three goals are held in balance.
1) Bend the prequels to the story continuity of the original trilogy and the impressions it gives.
2) Improve the prequels in and of themselves, as films, through conventional 'FanFix' methodology. The pacing is improved, dialogue trimmed, and characters are developed better. This is the most readily apparent of these three goals that can be seen in The Phantom Edit, for example. The edits should be viable as films on their own.
3) They ought to be functional as replacements for the original versions. This means leaving the film's thoroughly "prequel" nature unaltered, respecting the broad strokes of Star Wars orthodoxy, and avoiding making changes that would betray to the audience that they're watching a fan edit. In other words, none of the other two listed goals should put undue stress on the goal of producing something that would have been suitable to have been released in 2002.
Cuts and Additions:
Cuts and Additions (An asterisk, *, signifies a change for V6):

The primary source material is a preservation of the HDTV version by OT.com user Schorman.

Camera pans down, rather than up, after the crawl, to maintain continuity with the other five films.

Removed Captain Typho's lines before the ship blows up.

Added deleted scene where Padme addresses the Senate. This establishes some context for the political content of this film, as well as Padme's post-Queen character.

Trimmed the scene in Palpatine's office to remove unhelpful dialogue.

*Reinstated Jar Jar greeting Obi-Wan and Anakin at the elevator

Anakin's inappropriate compliments are trimmed in favor of making it a relatable awkward moment for him. It doesn't give Padme pause.

In the interest of downplaying Obi-Wan and Anakin's antagonism, their discussion about their roles in front of Padme is trimmed to get to the point.

Anakin does not talk to Jar Jar.

Removed Jango talking to Zam, to save his reveal for later and remove redundancy.

Tightened up the speeder chase to remove overly dumb moments, dialogue, and physics.

Anakin doesn't lose his lightsaber, and Obi-Wan doesn't lecture him about it.

Cut Windu's instructions to Anakin. It's more effective characterization if Anakin decides to talk to Palpatine himself.

*Reinstated Jar Jar being given responsibilities as Padme prepares to leave.

Removed Anakin complaining about Obi-Wan to Padme. Padme consoles him, and they acknowledge that Anakin has grown up. Padme's only initial barrier to him has been dissolved.

*Reinstated the original ending to the packing scene

*Reinstated a truncated version of the Dex’s Diner scene

Anakin doesn't mention attachment being forbidden. This on its own doesn't change anything drastically, but it's not necessary to define the universal 'Jedi Way' so narrowly.

Added deleted scene where Obi-Wan and Mace talk on the landing platform.

Added first deleted scene of Padme with her family, replacing conversation with the new Queen.

Removed Kaminoan prime minister listing numbers of clone units. It lessens the power of their reveal in a few scenes.

Boba Fett is not described as being a clone. He probably still is a clone, but the pacing is off when the movie pauses to talk about him when nobody asked.

No fireplace scene. Instead, we have a sunset kiss that is interrupted by a scene transition. Scene has been regraded by NeverarGreat.

When Obi-Wan reports to Yoda and Windu, removed Windu's perspective-less question about the assassination attempt.

Removed dialogue about the Jedi not being able to use the force due to the dark side clouding everything.

Lightly trimmed the fight in the rain.

Tightened up the chase through the rings of Geonosis. Removed childish Boba moments, and sped up the pacing.

Trimmed Cliegg Lars' dialogue that goes over the top to characterize him as a good guy.

Obi-Wan identifies Count Dooku as the mastermind of the assassination attempt, rather than Nute Gunray.

*Replaced 3PO’s line about never having flown before, in order to complement a change made in ‘Cloak of Deception’ which gently implies a backstory for his character

Trimmed dialogue as Palpatine and company discuss what to do.

Jar Jar doesn't fumble his words as he proposes giving Palpatine emergency powers. He also doesn't seem caught by surprise when his colleagues applaud him. He appears more competent.

*Reinstated Yoda hinting that he is going to visit Kamino

Threepio and Artoo stay on the ship and do not make their way into the battle.

*Reinstated a truncated version of the droid factory sequence, though retained the deleted scene where Padme speaks with Dooku (FX of Anakin deactivating his now non-broken lightsaber courtesy of Sir Ridley)

Trimmed love confession scene to remove Anakin's surprised reaction, because they had not decided not to get together.

Removed Threepio and Artoo from the battle, as well as trimming it up slightly.

Lessened Obi-Wan and Anakin's antagonism after Padme falls out of the transport.

Removed the Jedi giving the clones military advice; this helps establish the clones as competent soldiers and the Jedi as being dependent upon them.

Trimmed the duel with Dooku.

Yoda does not take out a lightsaber. I borrowed one brief shot from L8wrtr's edit.

When AOTC first came out, I read somewhere that reversing the audio of Dooku's pilot droid sounds like, "Use the Force, idiot."

Sidious does not address Dooku as 'Tyrannus,' and that title has been removed from the film.

Added credits for myself, workprint viewers, contributors, and acknowledgments of all other AOTC "FanFix" fan edits to date.
Cover art by OnlyOneKenobi (DOWNLOAD HERE) 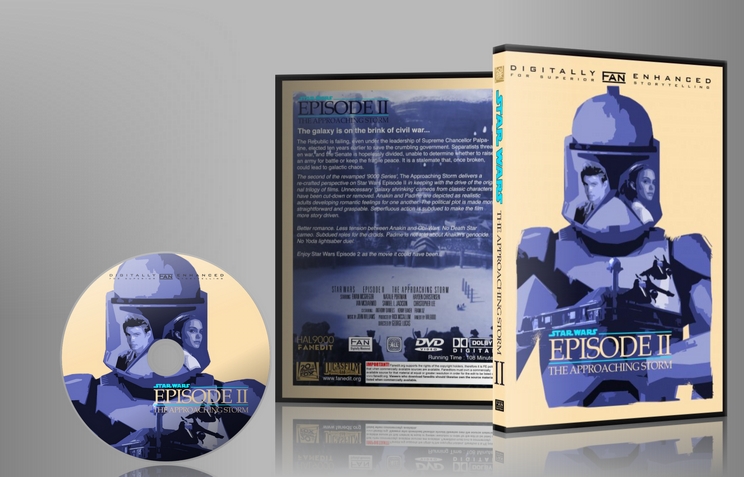 Among the edit's achievements: the three worst scenes are cut out of the movie entirely, the improved opening scenes flow more naturally, the pacing has been improved, and the Anakin/Padme romance actually works now. I have a few nitpicks but taking it on its own merits, well...it's really quite remarkable.

This edit transformed the original film--one that I would describe as 'so-bad-it's-good'--into a movie I'd now say is 'pretty good'.

Do you recommend this edit?
Yes
Format Watched?
Digital
M
meadows Top 500 Reviewer 9 reviews
Report this review Comments (0) | Was this review helpful? 0 0
September 21, 2021
Overall rating
9.1
Audio/Video Quality
10.0
Visual Editing
10.0
Audio Editing
10.0
Narrative
8.0
Enjoyment
9.0
My first time seeing this, along with the other prequels, since the first viewing in theatres. Somehow it seems like the same movie (major plot points and characters are intact) while nevertheless feeling vastly improved in terms of tone, story and characterization. Hal9000 is a master and has utterly redeemed this trilogy, while keeping his handiwork nearly invisible. A difficult balance, but it looks effortless.

Do you recommend this edit?
Yes
Format Watched?
Digital
R
recordwrangler95 Top 50 Reviewer 79 reviews
Report this review Comments (0) | Was this review helpful? 0 0
July 14, 2021
Overall rating
10.0
Audio/Video Quality
10.0
Visual Editing
10.0
Audio Editing
10.0
Narrative
10.0
Enjoyment
10.0
Just like with the Phantom Menace/Cloak of Deception, the recut of the film makes a massive difference. I'd been aware of all the deleted scenes, but seeing them play out (seamlessly, I might add) gives so much more context and depth to the film that you have to wonder why they were cut at all. They vastly improve the Anakin/Padme courtship, the role and concerns of the Jedi feel much more balanced overall, and it just gives the film a significant amount of depth. Another fantastic edit.

Do you recommend this edit?
Yes
Format Watched?
Digital
A
advisorok4636 Top 100 Reviewer 36 reviews
Report this review Comments (0) | Was this review helpful? 0 0
December 29, 2020
Overall rating
8.8
Audio/Video Quality
9.0
Visual Editing
10.0
Audio Editing
9.0
Narrative
10.0
Enjoyment
8.0
Don't think for a second that my less-than-perfect score means that this edit is not the ONLY version of this movie you should watch. The Approaching Storm makes it clear, in my eyes, that AOTC had the potential to be one of the best Star Wars films ever made. Bummer it turned out the way it did.
Audio/visual quality gets a 9/10 for the integration of deleted scenes. They are essential to improving the narrative but when compared to the original (which is what the review process asks of me) it's a noticeable quality dip.
Visual editing is a 10/10. Flawless, if you ask me.
Audio editing, however, loses a point and gets a 9/10 for the music cue used during Anakin and Padmé's first kiss. My wife, who is watching these edits with me and spends more time looking at her phone than the TV, said "oh, that was weird. It was obviously cut short." Normally she can't tell the difference between puppet Yoda and CGI Yoda, so for her to notice this audio edit means I have to take note of it ;) Perhaps a slower, less dramatic piece of music could fill that moment and make the transition less jarring.
The Narrative is an easy 10/10. You can finally see what Lucas was going for.
Finally, Enjoyment. It gets an 8/10 because, damn, this movie is now officially "good." Compared to the original it's a 10 but as a film, it still has its moments that prevent it from achieving greatness.

Do you recommend this edit?
Yes
Format Watched?
Digital
A
abrampt Top 500 Reviewer 5 reviews
Report this review Comments (0) | Was this review helpful? 0 0
View all user reviews