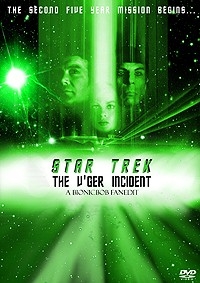 As it seems, I like Star Trek: The Motion Picture a whole lot more than most people. I think it’s an excellent Sci-Fi film, my fave of the Trek movies actually. I find the way it unfolds to be more mood-creating than “boring”. In other words, adagio can be as valid and beautiful a musical tempo as allegro. So, that means I didn’t prefer this fanedit to the original.

Yet I liked it a lot better than I thought I would. My favorite angle of TMP, the mystery around V’Ger progressively unfolding, develops mostly the same way, and, otherwise, I think Bionic Bob achieved his goal to give a TOS flavor to it pretty well (I’ll leave the minor Trek mythology details to the experts). Focus is back to Kirk and Spock indeed. However, ironically I got the feeling that the reordering of his sequences in the first half pointed out his initial so-called “assholeness” more than the original. On the other hand, from watching this version no one would doubt the movie is and always was all about Kirk. The new pacing works very well mostly, the sole excepcion being Spock’s spacewalk, which I found too fast, seemed like he was continuously reading from a list instead of discovering/realizing things one at a time.

The editing was mostly very well done, except for some of the fades to black, that screamed “artificial” It might be because of the music fading out at the same time, while more of an ending cue would help hiding the stitching. Otherwise I noticed no hard cuts. However, and I understand this is a firstling, several technical aspects left quite a bit to be desired. Red-tinted sequences, as others have mentioned, look badly compressed and pixelated, but to me the biggest letdown was that the DVD was exported in 4:3 non-anamorphic widescreen format, rendering the actual movie as a smallish rectangle in the center of any panoramic screen. Also, the footage inserted into the end of Spock’s spacewalk (which I loved, actually) had fades to white which covered the black bars too, as did the final movie poster still. Some ending inserts were low quality as well (source problems, I guess), and, finally, I personally wouldn’t include the red fanedit warning as part of the main movie, but as a separate video or part of the menu (which, BTW, is very well done, particularly for a first-timer).

Overall, I’m giving this fanedit a 7/10, which would be 8 or 9 if not for technical issues. This shows a very talented faneditor, whose subsequent works I’ll be definitely checking out, and a fanedit which, if a TMP fan liked a lot, people who like Trek but didn’t much care about TMP will no doubt love to pieces.

It has been a real blast from the past to get back to a really great firstling from someone who quickly became one of my favorite faneditors on this site. And it's been quite an experience to finally be able to watch it in the technical conditions it deserves. This has gone a long way since the quite subpar 4:3 of version 1, it's now beautifully anamorphic and looks mostly very good. Still, there were a couple of spots which showed similar problems than version 1, particularly the "red" footage in the climax that's not red anymore but, fittingly, in very sixities-like greens and blues, yet still showing the strange pixellation Bob's software maliciously insisted in applying to bright red areas. So it seems that it'll apply it anyway even if you get the red to stop being red... Also, there's a bit of interlacing during the opening credits, which maybe were rescued straight from version 1. Audio was fine, a few music transitions stood out for me but probably because I know the score for TMP so well.

And as for the narrative itself, I liked it even better than in version 1. I still love the mood of the original TMP, but this edit feels a lot like classic Trek. One narrative flaw did stand out for me this time around, though: the cutting back of Decker and Ilia, particularly during the Decker/probe scenes, rendered these characters a bit puzzling. One moment Decker is hating the probe's mechanical guts for killing off Ilia, and suddenly in the climax they're all about making eyes at each other while the love theme plays. Of course, Decker and Ilia's acting is the weakest link of the show and I agree with their cutting back to push our beloved classic characters forward, but still it's kind of a hole. Maybe it might have worked better if I weren't so familiar with the original.

The twist ending is classic Bob, and I absolutely love it. The new David Kerin effects work great.

I'm glad Bob went back to raise the technical quality of this edit up to the level of its artistic merits. This is a classic edit, and one that is as fun to watch as the first day.

And the Bionic adventure is just beginning. :)

Do you recommend this edit?
Yes
Format Watched?
DVD
Was this review helpful to you?