Brief Synopsis:
It's becoming more and more clear that "Star Trek: Into Darkness" has become quite the divisive film-is it good, action packed fun, or is it a shameless remake of the greatest film in the franchise? After repeated viewings (like most people I know) the film , for me personally, has landed right square in the middle. It's still well acted, shot, and directed, even with the many problems with the script and how it is a massive retread of "WoK" as well as the 2009 prequel. What I had in mind, was to give this film a fresh new look in re-orderings, the removal of as many references and lip service snippets, and try to fix most of the annoying character flaws the script had.
Intention:
Underneath all of the rehashing and pointless filler, there is a very good and complex story to be told. I love the theme of whether or not Starfleet is or isn't a military organization. How a lust to do the right thing can blind you to any wrongdoing, even if it means innocent killings. All of that, is possible once previous situations (including similar quips to the last movie), poor characterization of Kirk and Uhura, and having a movie that's pretty enough to look at.
Other Sources:
- youtube.com
- Star Trek: Into Darkness the Deluxe CD

Special Thanks:
Dangermouse, Smithers, TV's Frink, TM2YC, Zarius, Bionicbob, Uncannyantman, Throwgncpr, asterixsmeagol, TomH1138, addiesin, Digmodification, hbenthow, ImperialFighter, SkywalkerFan01, Canon Editor
Release Information:
Digital
Cuts and Additions:
- Overall color regrade to broaden the spectrum, from a dull bluish filter to a more vibrant and lively picture.
- Decided to experiment and add some 35mm grain, hopefully for a more filmic look
- Special "In Memoriam" to Anton Yelchin before the credits
- Brand new opening, accompanied by a different score to help set the mood
- Captain Kirk: is now a smarter, less arrogant, more commanding officer. It's been awhile, he should've grown a bit more from the previous installment.
- Lieutenant Uhura (and to some extent Carol Marcus): are stronger female characters in that Uhura isn't a nagger over Spock, while Marcus doesn't strip down for the teen audience.
- Various trims to dialogue and scenes in many ways. Basically any reference to previous jokes (again last movie), characters from the old TV show, and anything that will help make our heroes look smarter,
- Brand new subtitles over the Kronos Klingon encounter between Uhura. This is so the plea to them is more personal and honor based, something the Klingons relate to. Speaking of which...
- The Klingons? Are more civil when confronting Uhura, meaning they don't try and choke/stab her. Khan is the one who sends things into a frenzy.
- The entire ending itself has been drastically altered: gone is the forced "Kirk is dying" scene ripped from "WoK", same with the subsequent San Francisco hustle with Spock and Khan, and the whole enterprise bridge ending similar to the previous film? Gone too. Again, with all of this, we get a more emotional, less cliche and more impactful ending than before.
Cover art by ironman23 (DOWNLOAD HERE) 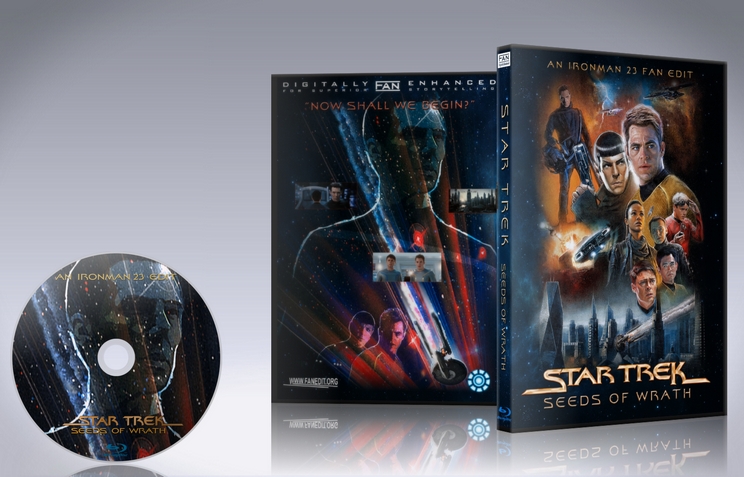