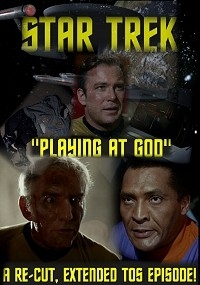 Join the Forum Discussion
Tweet
Brief Synopsis:
Not to be confused with DS9's 'Playing God', this edit combines Star Trek: The Original Series 'The Ultimate Computer' and 'The Omega Glory' into one extended episode, with the events of 'The Omega Glory' taking place on the planet that M5 orbits during the first half of 'The Ultimate Computer'.
Intention:
This is a completey revised and re-structured version from the one I did several years back. Instead of making it 'movie length' with new titles and no commercial breaks, I am retaining the 'extended episode' method I have recently been using. Most significantly, I am going to re-structure The Ultimate Computer and condense The Omega Glory footage, so that the latter does not appear to simply be an episode slapped into the middle of The Ultimate Computer.
Other Sources:
Star Trek: The Original Series Soundtrack Collection
Release Information
Cuts and Additions:
MAJOR CUTS/ALTERATIONS:

- Due to more footage to play with, the Starbase is now depicted as Space Station K7 from The Trouble With Tribbles.
- Post-titles credits removed and replaced.
- The first unannounced war game will kick off the testing of M5, then after the Captain Dunsel/Kirk’s quarters scene, we lead into the planet survey bridge scene, and subsequent 'Omega Glory' segment.
- McCoy joking about Spock’s love-lit eyes to Kirk, is cut.
- The Kirk/McCoy corridor scene finishes earlier.
- The second part of Spock's conversation with Kirk after the initial testing of M5, praising Daystrom for his achievement, is cut.
- Daystrom entering the bridge prior to the first war game, has been cut, as well as the message from Wesley and subsequent preparation by Kirk for the battle.
- The scanning of the planet and subsequent computer tie-in for landing party recommendations is cut, along with Scott's report that M5 is shutting down systems all over the ship.
- The opening scene of Act II in engineering, is cut.
- After we return from The Omega Glory section, we cut back to Kirk and Spock entering the bridge, leading into the Woden scene, and the structure is per 'The Ultimate Computer' thereafter.
- After the Woden is destroyed, Chekhov's line that the Enterprise is returning to its original course and speed, is cut. Also, the crew's subsequent reaction shots.
- Both Jefferies tube scenes are cut.
- Daystrom's line to McCoy comparing M5 to a child, and his subsequent assertion that the doctor is frightened due to lack of understanding, is cut.
- Kirk’s line referencing Daystrom's first computer tie-in is cut.
- Two sections from Daystrom's second conversation with M5 are cut.
- Kirk’s line asking for battle status after Daystrom is escorted to sickbay is cut.
- The beginning of Kirk’s conversation with M5, stating the unit will be under attack in a moment, is cut.
- Spock's report that the attack force is almost in range, is cut.
- Kirk’s reference to the '19 lives' he is about to sacrifice - Lt. Galloway from The Omega Glory is now one of the 20 - and he is dead - so that would make it 18.

- Post-titles credits and accompanying exterior orbit shot are cut.
- All footage of Lt. Hadley is cut, and where appropriate, substituted for Chekhov.
- Newly positioned reaction shots of Spock, Chekhov and Daystrom on the bridge, observing the USS Exeter's enigmatic status on the viewer.
- The transporter room scene from the teaser is cut. In my edit, Spock is on the bridge with Kirk when they discover the USS Exeter.
- The empty USS Exeter engineering shot is replaced by an empty shot of the transporter room from 'The Mark of Gideon', removing an obvious editorial error, when in fact Kirk is speaking from there!
- Spock walking over to the science station on the USS Exeter, is cut.
- Tracey's line referring to the Enterprise crew dying from the disease if the landing party had beamed straight back is cut.
- McCoy's conversation with Uhura regarding the medical lab and the need for a second blood analyser, has been cut.
- The opening to Act II is cut, fading in instead with Kirk tied up.
- The cell fight is significantly trimmed.
- The scene with the native female offering McCoy food, is cut.
- Kirk’s being knocked unconscious by Cloud William has been cut. Instead, it's implied the prisoners escape together, which compliments Tracey's line that Kirk set the Yang's free.
- Tracey forcing Kirk to beam down more phasers, and the exchange with Sulu, is cut. (Whilst trimmed for time, this does solve the problem of why Sulu is in command of the ship, and not Scott. Of course, originally Scott was in the former story, but not the latter.)
- A flipped shot of Kirk whilst detained by the Yangs, has been cut.
- The buildup to the entrance of the American flag, and the sequence thereafter, has been heavily trimmed.
- Spock and McCoy's exchange prior to the Kirk/Tracey final fight sequence is cut.
- The shot following Kirk’s final smile before departing is of Cloud William instead of the flag.

- Commodore Wesley does in fact fire on the Enterprise, and it appears to be destroyed.
- However, we then cut to the ISS Enterprise from the mirror universe, who in fact discover our heroes' ship in their universe!

Due to the volume of on-screen credits, and to avoid cluttering:

There's a lot to commend in this one, edits are competent for the most part, it's a fine joining of stories, and the stakes are heightened considerably, it's an interesting slice of federation arrogance bearing down on Kirk and company. The ending I have a little issue with, there is no real explanation why the enterprise is thrown into the mirror universe, it just happens. Perhaps it would have been better to end the edit on a much bleaker note and have the Enterprise destroyed by the war fleet then end it right there. That's just me though, I'm a dark guy. There was a bit of slow motion in some shots, I know they were for effect but it is a bit jarring.