Cuts and Additions:
SCENES removed first, THEN the changes which are SPOILER HEAVEY. YOU HAVE BEEN WARNED>

NOTE: The last 20 minutes could easily be trimmed by 10 min removing/trimming the Rios & Seven’s chat and other similar scenes that follow but they are vital character moments and frankly the one thing that is perfect (IMO) about Picard is these last 20 min and the crew coming together for season 2. Holding off Rios kiss to Jurati works well as a culmination to their build-up and is not a scene which jars any longer given the removal of the earlier encounter on the Sirena. 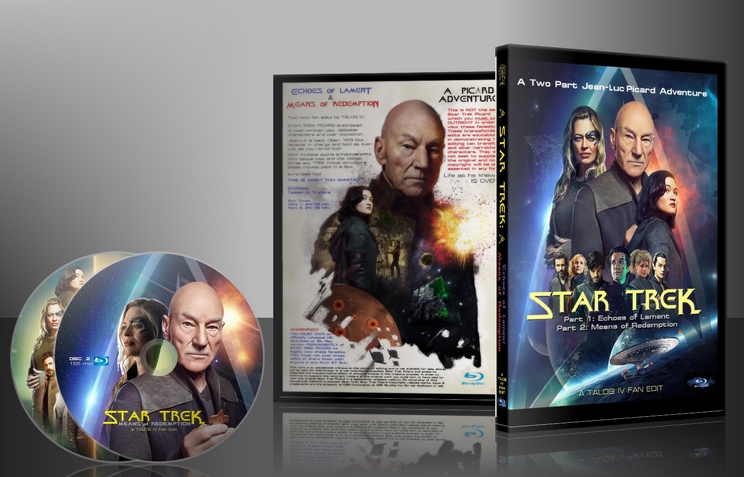 While I still watch all current incarnations of Trek, I often ask myself, am I watching out of loyalty or because I actually like it?
I am not certain, it is probably a bit of both, as the resurrection of the Paramount Plus era of Trek has been a frustrating affair thus far.

The original 10 episode run of PICARD's first season certainly falls into this category. It is a show that seems to distain Roddenberry's vision of humanity. It takes pleasure in making every character broken. It seems to wants to be "other" sci-fi franchises rather than be true to what made Star Trek unique and special for nearly 50 years. But perhaps the greatest sin, it is just sloppily written and paced.
While it is a series with many good "moments", it's best parts do not make a good whole.

Which brings us to Wraith's two part movie epic -- ECHOES OF LAMENT and MEANS OF REDEMPTION.

I say immediately and upfront, this two movie fan edit is BETTER than the series.

While I own the series on Blu Ray, the truth is, I will probably never sit down to rewatch EVERY episode again as I find the entire series problematic. Thankfully, Wraith's fan edit offers a nice alternative solution if I ever want to revisit Picard's freshman season.

Gone are most of the more non-Trek moments and awful plotlines. I am most grateful for the excising of the whole Raffie as a drug addict and how Picard and crew treated/enabled her. It is so horrible, it actually makes to despise Jean-Luc. Which is probably not a good ideas since he is supposed to be the hero of the show.

Also, the removal of Seven being a cold blooded murderer -- THANK YOU!!! I mean as a parent, I totally get it. And I think there were other ways a similar resolution could have been reached. But the writer's purposely have a PURE Trek moment where Picard and Seven discuss their humanity, and then in the very next scene they flush it down the toilet.

Unfortunately, due to locked plot points, not all of the illogical elements could be removed in this new version, such as Androids can apparently do Mind Melds (who knew you program Telepathy?) and Noonien Soong had a human son (which NO ONE QUESTIONS).

There are many, many similar and welcomed cuts like this that try to keep the narrative on course and closer to the Trek universe and it's characters that we are familiar with. Also, aiding in the narrative, is the rearranging of many scenes, so the plot unfolds in a more linear style.

There is some AMAZING audio work done throughout both edits, which aid's Wraith in hiding many cuts and with scene transitions. Though there are many moments where one have tell a line of dialogue has been removed by a slight unnatural change in vocal cadence or a cut away reaction shot that does not quite fit the moment. Also, there are some moments where slo-mo is used for transitions, and it does not always work, as it looks a bit stuttery rather than smooth and natural.

While I liked the dark cliffhanger ending of Part One, I thought the sudden cut to Goldsmith's theme for the end credits was too loud and uplifting, completely breaking the tone and mood of that powerful final scene... a mood that should have ominously lingered longer. I think the end titles would have benefited from a darker, more somber closing piece... perhaps the theme from Nemesis or Undiscovered Country?

Also, I felt the entire Artifact storyline (episodes 6-8) was perhaps too truncated and frenetically cut, particularly the action sequences. One of the jarring aspects of the new cut, Seven seems to appear instantaneously when Elnor activates the Fernis transpoder.

Each movie plays over 2.5 hours, and even with all the positive cuts and changes made by Wraith, it still felt like a bit of slog for me, particularly Part One, since it is all set up and the action really does not kick in until Part Two. It makes me think this may have worked better as a trilogy rather than a duology, with three movies of about 100 minutes in length? As one of the issues with the series condensed into this format, it really hammers home some of the very weaker writing and plot elements. This is no fault of the editor, as you can only do so much with this source material.

Again, I do want to stress, I found this better than the original series and I was entertained.
An enjoyable fan edit!


B
bionicbob Top 50 Reviewer 110 reviews
Report this review Comments (0) | Was this review helpful? 2 0
September 08, 2021
Overall rating
10.0
Audio/Video Quality
10.0
Visual Editing
10.0
Audio Editing
10.0
Narrative
10.0
Enjoyment
10.0
Great edit! I enjoyed the Picard series, kinda. It was long and slow and seemed to have moments that went nowhere, but in between all of that was some good stuff. This edit got rid of all of the bad and kept the good. It was paced well and a good length.

If I had one complaint (this is minor and my preference, so no points were taken off), why not instead of two long-ish movies, how about 4 or 5 episodes?

This edit was very enjoyable.

Do you recommend this edit?
Yes
Format Watched?
Digital
A
advisorok4636 Top 100 Reviewer 34 reviews
Report this review Comments (0) | Was this review helpful? 1 0