Brief Synopsis:
The Sandman thread is entirely removed from SPIDERMAN 3 in order to create a tighter movie focused on the three friends (Peter, Harry, MJ) – with Venom as the Dark Side enabler and ultimate villain.
Intention:
Inspiring stuff going on here (fanedit.org) prompted me to think about a movie which had a lot of promise but ultimately didn’t deliver: Spiderman 3.

I’ve always felt the problem was too many disconnected stories going on – for one, there are THREE bad guys in the film (Goblin Jr, Venom, Sandman). Sandman, although brilliantly executed, always felt like a story running parallel to the rest of the movie. Goblin Jr has been a long time coming, Venom is necessary for Peter Parker to mess things up (for him to face his Dark Side) – but Sandman’s connection is a very tenuous “Oh actually THIS guy killed your uncle”.

So, I have removed the Sandman thread entirely, in order to create a tighter movie focused on the three friends (Peter, Harry, MJ) – with Venom as the Dark Side enabler and ultimate villain.
Release Information:
DVD
Cuts and Additions:
A total of 47 video cuts, and many more audio cuts:

Movie is now 90 minutes long, and much tighter, and character-focussed, like the first two movies.

Venom becomes more central to the plot, and Peter’s descent is more brutal.

Pacing is greatly improved over the original.

0:00-10:00 As in movie (Opening credits, everyone loves me, snuggle on the web intro of Venom attaching to Peter’s scooter)
..CUT directly to [intro to Flint Marko, daughter etc]

42:29-48:28 MJ waitress, with Harry
44:06 EDITED Dickovich scene (he makes reference to shouting at him earlier under the influence of the black suit. edited out)
Harry and MJ dancing & kiss & return of Goblin Jr
..CUT directly to [MJ listening to Peter's message about "the other night" â€" as she didn't try to help him re Marko. MJ being attacked MOVED to dream sequence]

56:22-66:00 Peter vs Brock (not necessary to see Brock’s earlier scene with digital camera (always thought it was crap) anyway a “pro” photographer just taking pictures without even looking through the viewfinder!)
On phone with Dr Connors
Dark Pete on the streets (Jazzy, virile Pete!)
..CUT (video) SLOW FADE (audio) to [MOVED from earlier in film]

64:07-75:05 Jazz date with Gwen
Church removal of Venom
Brock becomes Venom
Pete in shower
Pete says to May he’s not good enough (no kidding ... can anyone say “self-obsessed”!)
..CUT to [Sandman and Venom meet]

75:05-77:05 Outside MJ’s apartment
MJ in taxi, Venom
76:30 EDITED news broadcasts ... no mention of Sandman
Red Spiderman returns
..CUT (timed with turning off TV!) to [Awful reporter and message in the web]

77:05-77:44 Harry I need help
77:19 EDITED “I can’t take them both”
..CUT to [NO LAME "motivational" butler scene. What an awful MacGuffin this scene is! I've let the audience assume it's due to friendship with MJ and Peter. If this seems to weak, could put in a montage of friendship scenes from Spidey 1&2]

Cuts that are a little abrupt have been soften by cueing the next scenes music early ... or even combining the two scenes music to give an audio prep for the cut.

“There are a few changes I made to the DVD, as follows:
Moved fight with Harry back to straight after black suit (cut Dr Connors â€” phone call has enough exposition)
And date with Gwen after Brock (steals his girl as well!)
Reinserted “i need your help” with Harry
Cut straight from “you came” “Just in time” to MJ scream
Fixed 2 music jumps in flight after MJ
Bigger scream from Venom to make Spidey turn round after convo with MJ and video zoomed in on turn to avoid Spidey standing on his own (the amazing disappearing MJ :grin: )
Made Harry’s jump to save Peter a little less telegraphed (just one edit makes all the difference)
Removed unnecessary crossfade after Venom’s death”
Cover art by AstonMartins4me (DOWNLOAD HERE) 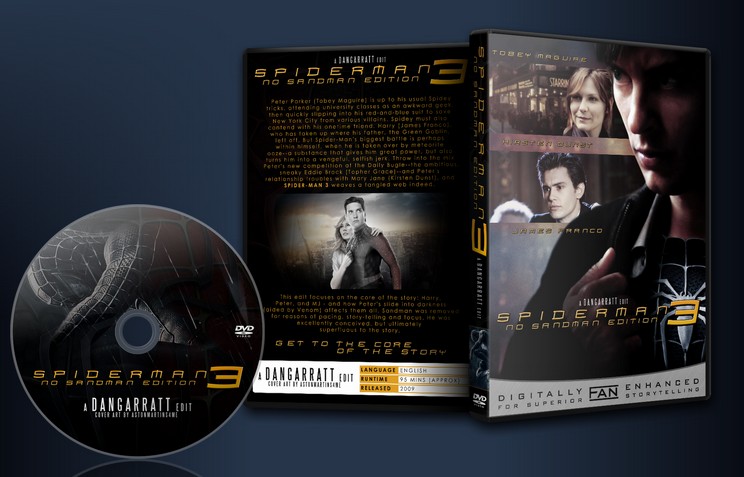 This is truly an underrated and utterly spectacular fan edit. While still not the best of the Spider-Man franchise, this is now on the level of the first one. Even as I first exited the theater, I realized how utterly extraneous Sandman’s character was and how it truly felt like he was stuffed in there for good measure.

Sandman simply didn’t belong in this movie, and the editor realizes it. Without him, this is the far more introverted and personal film that Spider-Man 3 should have been. Peter finally has to face dealing with his own life (not just Spider-Man’s); this deals with the consequences of his actions and the emotions he feels. In a way, the symbiote just represents his darker personas that he needs to conquer in order to live full life. With no focus on the Sandman, the audience can realize that.

This edit has a number of pluses too. The character relationships do seem stronger. We get to focus on Peter’s love/hate relationships with Mary and Harry. Also, the toned down action of this edit really emphasizes the character driven nature of this movie. Even Topher Grace and “Emo Peter” don’t seem as annoying here, they’re typical “comic book” aspects coming to the silver screen. That rubbish plot about Uncle Ben is also gone; I never understood why Raimi, as a fan of the comics, would violate them like that. As a side note, thank you for keeping Bruce Campbell; the man’s just flat out awesome.

This edit is flawless technically in terms of removing Sandman. There are no awkward references to him at all. Audio is crisp and video is immaculate. If ever I want to see Spider-Man 3, without a doubt, I will go to this edit.