Brief Synopsis:
A revision of the 1972 classic that removes the most extraneous and patience taxing sequences, and gives a moderate boost to the pacing of other scenes, but stays true to the full emotional journey of the main characters and meditative tone. In Russian with hard burned English subtitles.
Intention:
To reduce tortuously dull sequences, overextended takes, distracting digressions, and pretentious philosophizing. At the same time, to respect the artistic vision, the character development and the languorous and reflective tone. To focus the story on Solaris Station and the psychology of alien contact and lessen the attention on minor characters. To offer a more refined and entertaining version that appeals to a wider audience.
Special Thanks:
Thanks to the Fanedit.org community, an unmatched resource of technical knowledge and enthusiasm for the fanediting hobby.
Release Information:
DVD
Editing Details:
A psychologist is sent to investigate a failed scientific mission in orbit over the sentient ocean planet of Solaris, but becomes involved in a very personal and mystifying odyssey of alien contact.

Andrei Tarkovsky’s 1972 Russian film has been called a “sci-fi masterpiece,” and “excruciatingly boring” also. This edit takes the original as a diamond in the rough. Solaris is one of the most literary and thoughtful science fiction movies ever made. With some careful cutting and polishing a real gem can emerge.

The movie has interesting challenges for a faneditor. The director’s style uses a lot of extra long, extra slow takes that are tough to manipulate without losing continuity. The soundtrack is monophonic and the subtitles are an extra layer to juggle. On the other hand there is a lot to work with. Whole sequences can be deleted without affecting the plot in the least. The long slow pans and zooms provide many good spots for trims.

Hard core Tarkovsky fans might really hate this edit. And if your idea of top quality entertainment is Transformers style nonstop action and quick cuts, this edit is definitely not your cup of tea. It is still an old-school foreign movie that is long and slow, with characters who talk a lot about their relationships to each other. 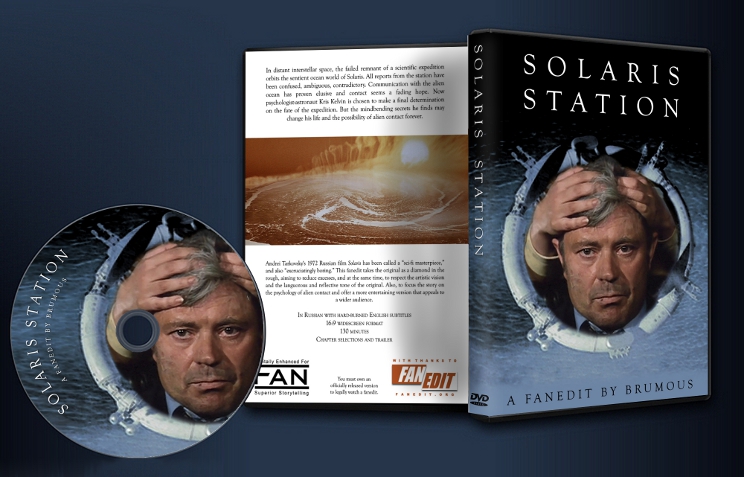 From an editing standpoint, the video looks amazing. It looks like somebody did a great job restoring the movie and that you preserved the quality in your edit well. Your cuts appeared to be technically flawless and worked fine within the context of the original story, what little story there is anyway given its abstract nature. Though to be honest and fair about ranking the technical side of this edit relative to other fanedits, it would not be comparing apples to apples to give you 10/10 for your technical work. There is virtually no audio in this entire movie other than dialogue and a few sound effects, thus making the editing a relatively simple process.

I am struggling how best to rank this because of the age of the material. Based on your stated objectives to essentially preserve the directors original vision and only to cut out the most terribly, unacceptably long portions of the movie, this edit succeeded very well. Though, you still didn’t manage to remove all of the “pretentious philosophizing” in my opinion, granted it is a very subjective matter. There was one point where I felt like the director was cramming the moral message of the movie down my throat when the character goes off on a long monologue that I shall briefly paraphrase, “why are we exploring the stars when we should be exploring inward into our own minds and hearts instead.” Maybe the message struck me particularly bad because of my own present-day biases. It is a political soft spot for me when people try to discredit or dismiss what little is left of America’s space program.

Based only on your intentions, I would probably give you ~9/10 as the previous reviewers did, but I just can’t do that. I’m sorry. For me this story still doesn’t work either on an abstract level or a narrative level. It is still beyond terrible in its pacing relative to movies being made then and today (and this is coming from a guy who will happily sit through the original 2001). I would love to see an alternate, more ambitious version of this movie that tries to bring it more inline with modern movie expectations by cutting another unnecessary 30+ minutes out of it, adding music, and reworking the story a bit.

This edit is superb.

Engaging storytelling through editing and technically very well put together.

I’ve seen Steven Sordeberg’s 2002 adpation of the novel about 6 or 7 times. I adore that film.

Tarkovsky’s adpation I’ve only seen once, in a small inner city arthouse theaterette with beanbags and mattresses where, for the first and only time in my life, I fell asleep in a cinema. For about 30 minutes I think.

Maybe I can blame the beanbags, but we all know that many viewers find the film torturously slow. I found the original cut full of good ideas and with a good cast, but with too much pretentious dialogue and too much arty but pointless padding. It’s a ripe candidate for a shorter version, created by an editor without Tarkovsky looking over his shoulder.

Well done Brumous – you’ve transformed the film. It’s a milestone sci-fi flick despite its flaws and now you’ve removed many of those flaws. No sci-fi fan now as any excuse not give Solaris at least one viewing.

Well I just finished watching Solaris Station and I was very impressed. I watched the original in preparation for watching this fanedit and Brumous had warned me ahead of time that it can be quite boring (most notably the infamous tokyo driving sequence). My only other exposure to this material had been through seeing some of the soderbergh/clooney remake. I found the original Solaris enjoyable and not too boring (although watching it in 30 minute segments may have helped make it less boring).

As is my usual rule, I did not read the cutlist before watching Solaris Station. Brumous firstling is very well done. The audio and video editing was excellent nothing noticeable or jarring. Other than the considerable shortening of the tokyo sequence i honestly could not tell what had been excised from this edit. The pace and mood of the original are intact but Brumous’ edit gives viewers a more accessible version of Solaris to watch. Rating 9/10. Excellent job. Great fanedit and forced me to watch a movie i probably wouldn’t have watched otherwise!
G
gatos Top 50 Reviewer 73 reviews
Report this review Comments (0) | Was this review helpful? 0 0