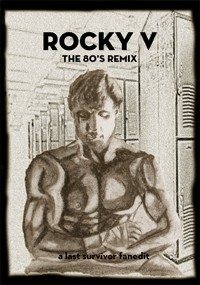 Ah, Rocky 5. What's not to love? Only a story which many say was unnecessary and should've never happened. Considered the high we're left with at the end of part 4, how could they possibly top it? Well, they felt going backwards and having the story/character go full circle was the only option at this point. Everyone's hearts were in the right place, but the pieces simply weren't there.

However, this edit attempts to wash away all of that, and tries to tie it in with its 1980's predecessors. On that account, the edit passes. However, we're still left with a story that doesn't simply add anything to the Rocky story. Also however, I'm a huge Rocky and Sly fan, so I love this edit. I can now honestly say that I can enjoy all 6 Rocky movies. The music choices work perfectly (if you're into music tone of parts 3 and 4, that is). Love the synth songs chosen for the menus. Hearing Dolph's voiceover from his "Maximum Potential" fitness tape dubbed into the song already lets the viewer know tat we're in for some rocky 4-style goodness. This stuff is my favorite music genre. For anyone looking for a nostalgic 80's sounding genre of music, Look up artists like MPM, Mitch Murder, Miami Nights 1984, and the list goes on and on.

For the Rocky 4 recap, we get Survivor's new song "Fire Makes Steel". This song was intentionally made for Rocky 6, but Stallone didn't use it. So I'm glad it at least got used here. The edit is done perfectly so that the recap feels like a music video. Something the editor of the theatrical Rocky 4 couldn't have gotten more wrong. Even as a 7 year old (back in 1991), I was confused as to why the fight was edited differently than how it played out in the film (something every Rocky sequel did up until this point).

To explain how Rocky's son gets so much older, we simply don't see him until the "One Year Later" screen cap. The way this was edited was beautiful. Fading to black after Rocky's flashback at the old gym, to the train passing was perfect. We don't even see GW until a year passes.

For Tommy's montage, The Pat Benatar song fits great, but I prefer the Mitch Murder song used in the special features more. However, for the tone of the film, PB's song is better. For the 2nd montage, we have "Nothing's Gonna Stand In Our Way" by John Farnham. Another great 80's AOR rock singer. For the big fight at the end we have the orchestrated version of "Eye of the Tiger". The fight was short, but the cuts were seamless. I actually prefer it this way simply because even as a kid I couldn't stand how the fight kept going back and forth between Rocky winning, then Tommy winning, then Rocky, then Tommy, etc... And the less said about some of the crowd commentary ("He took my ROOM!!") the better. Sure we miss out on Mickey's parting words as "the angel over his shoulder", but I'll take the bad with the good. It's great that now we have "Eye of the Tiger" in 3 of the Rocky movies instead of only 2. That's half the series. Also, the drawing of Rocky next to the credits is a nice nod to Rocky 2's credits.

Watching this movie again for the first time in years (with the exception of the work-print version) I have to say I forgot how funny Paulie is. Also have to give props to Sage (R.I.P). His performance is one of the best (and my personal favorite) out of all the actors in the movie. A shame the guy never made it in Hollywood. He certainly had the chops. TBH, I really wish he had revisited the character for part 6, though the guy from "Heroes" did a fine job as well. Talia really brought it here as well. With pretty much the entire cast doing their best, I guess it really boils down to Sly's performance. I guess because Sly played Rocky more as a caricature here, that's the real reason people got turned off by the film. Because overall, this edit makes the best parts of this film shine and honestly makes me hold the film in higher regards now.

Tommy needed to be fleshed out a lot more. Sly really should've written/filmed a scene where Tommy's dad comes to see him now that Tommy is getting famous, and dad wants what he feels is "owed" to him (ie: money). Then Tommy could knock him out and tell his dad what it is. "You were never there when I needed you". It not only would've alluded to later on when Tommy would have to fight Rocky, the man who got him where he was. But it also would've shown that Rocky was beginning to go down that same path with his own son. A nice way to tie it all together IMO.

Anyway, this version is now a part of my fan edit collection. Great job!!

Do you recommend this edit?
Yes
Was this review helpful to you?