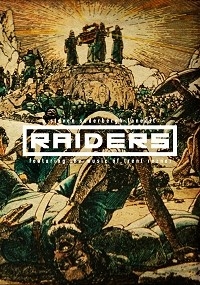 Yes, that Steven Soderbergh. The adventure classic gets a sonic overhaul. All audio - dialogue, music soundtrack, sound effects - gets wiped. In essence, this is now a Silent film. This is so viewers can concentrate on the visual design without being distracted. Noted. He does tack on a very distracting film score, however.

Video - 1280p, MPEG 4. Glorious black n white, razor sharp. High contrast. Interiors have that deep black, Noir look. No editing or rearranging, though. This is the film, as released. For studying the composition, this is outstanding. As has been noted before, Raiders plays well in black n white.

Audio - 2 Channel, 147 Kb. As noted, this is essentially a Silent. No subs, no inter-titles. For audio, Mr. Soderbergh selected music tracks from Trent Reznor scores “The Social Network" and “The Girl With The Dragon Tattoo.” At times, cues match the tone or tempo of the video narrative - other times the music is jarringly amiss. My feeling is he fired up his favorite tracks without considering how appropriate they would be. Several editors have replaced the entire score to better effect, and I will point out three.

For his Star Wars (Silver and Dusty versions), TMBTM condensed both trilogies into silent serials and replaced the sound design with well thought out John Williams cues. For his Lords Of Salem edit, SteFAN applied a Reznor score, though it did sync nicely to the images. Finally, Overclock, in reworking Empire Strikes Back, put in a wall of guitar metal; all derived, in one way or another, from John Williams’ themes. Not necessarily my cup of tea, but damn it was well conceived and executed.

As a kid, my brother and I used to watch 8mm movie highlights from Blackhawk. For music, we played a vinyl and hoped for the best. Syncing was hit and miss. I recall watching an old Bogart film, “Action In The North Atlantic” and playing the B-side of “The Bridge Over The River Kwai” soundtrack. Every now and then, the vinyl would match what was going on up on the screen. We were 8 and 12, and there really was not much alternative back then.
Mr. Soderbergh likely has access to state of the art audio editing equipment, or computer software. He could have easily tinkered with his musical cues so they matched the screen narrative. Instead, he did what my brother and I did 50 years earlier, with the same hit n miss results.

Enjoyment - Comments regarding inappropriate and distracting audio notwithstanding, this is an enjoyable, useful edit. As mentioned earlier, on a sheerly visual level, this is astonishing. Another editor, Roger Rmjet I believe, could make wise use of Soderbergh’s video rendition for an update of his Raiders serial.

On an aside, it would be nice if the editor could participate and receive feedback from this community. It might be mutually beneficial. That said, I am grateful he is making his edits available and encourage others to view them.

Extra thanks to TM2YC for showing the route to this one.