Brief Synopsis:
Steven Soderbergh replaces the soundtrack (SoundFX, Dialogue and Music) of 'Raiders Of The Lost Ark' with various Electronic pieces by Trent Reznor. The film is also converted to Black and White.
Intention:
I'm assuming the phrase "Staging" came out of the theatre world, but it’s equally at home (and useful) in the movie world, since the term (Roughly defined) refers to how all the various elements of a given scene, or pieces are aligned, arranged, and coordinated. In movies the role of editing adds something unique: The opportunity to extend and/or expand a visual (Or narrative) idea to the limits of one’s imagination - a crazy idea that works today, is tomorrow’s normal.

I value the ability to stage something well because when it’s done well it's pleasures are huge, and most people don’t do it well, which indicates it must not be easy to master (It’s frightening how many opportunities there are to do something wrong in a sequence or a group of scenes. Minefields everywhere. Fincher said it: There’s potentially a hundred different ways to shoot something but at the end of the day there’s really only two, and one of them is wrong). Of course understanding story, character, and performance are crucial to directing well, but I operate under the theory a movie should work with the sound off, and under that theory, staging becomes paramount (The adjective, not the studio. Although their logo does appear on the front of this…).

So I want you to watch this movie and think only about staging, how the shots are built and laid out, what the rules of movement are, what the cutting patterns are. See if you can reproduce the thought process that resulted in these choices by asking yourself: Why was each shot (Whether short or long) held for that exact length of time and placed in that order? Sounds like fun, right? It actually is. To me. Oh, and I’ve removed all sound and color from the film, apart from a score designed to aid you in your quest to just study the visual staging aspect. Wait, What? How could you do this? Well, I’m not saying I’m like, allowed to do this, I’m just saying this is what I do when I try to learn about staging, and this filmmaker forgot more about staging by the time he made his first feature than I know to this day (For example, no matter how fast the cuts come, you always know exactly where you are... that’s high level visual math shit).

At some point you will say to yourself or someone, "This looks amazing in black and white" and it’s because Douglas Slocombe shot 'The Lavender Hill Mob' and the 'The Servant' and his stark, high-contrast lighting style was eye-popping regardless of medium. 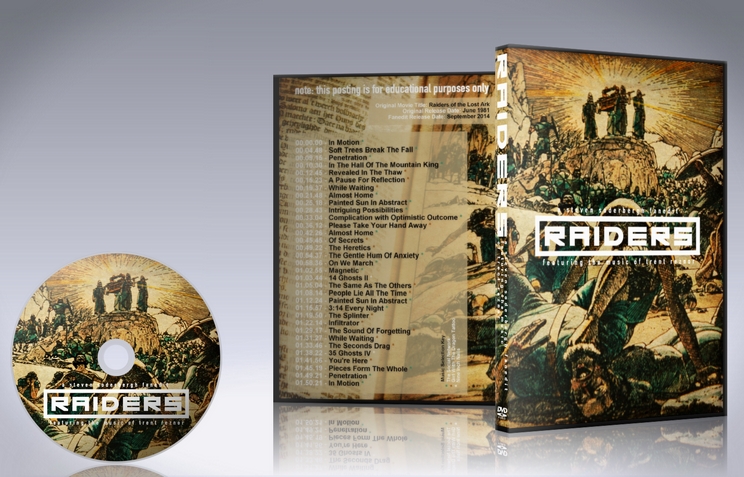 Video - 1280p, MPEG 4. Glorious black n white, razor sharp. High contrast. Interiors have that deep black, Noir look. No editing or rearranging, though. This is the film, as released. For studying the composition, this is outstanding. As has been noted before, Raiders plays well in black n white.

Audio - 2 Channel, 147 Kb. As noted, this is essentially a Silent. No subs, no inter-titles. For audio, Mr. Soderbergh selected music tracks from Trent Reznor scores “The Social Network" and “The Girl With The Dragon Tattoo.” At times, cues match the tone or tempo of the video narrative - other times the music is jarringly amiss. My feeling is he fired up his favorite tracks without considering how appropriate they would be. Several editors have replaced the entire score to better effect, and I will point out three.

For his Star Wars (Silver and Dusty versions), TMBTM condensed both trilogies into silent serials and replaced the sound design with well thought out John Williams cues. For his Lords Of Salem edit, SteFAN applied a Reznor score, though it did sync nicely to the images. Finally, Overclock, in reworking Empire Strikes Back, put in a wall of guitar metal; all derived, in one way or another, from John Williams’ themes. Not necessarily my cup of tea, but damn it was well conceived and executed.

As a kid, my brother and I used to watch 8mm movie highlights from Blackhawk. For music, we played a vinyl and hoped for the best. Syncing was hit and miss. I recall watching an old Bogart film, “Action In The North Atlantic” and playing the B-side of “The Bridge Over The River Kwai” soundtrack. Every now and then, the vinyl would match what was going on up on the screen. We were 8 and 12, and there really was not much alternative back then.
Mr. Soderbergh likely has access to state of the art audio editing equipment, or computer software. He could have easily tinkered with his musical cues so they matched the screen narrative. Instead, he did what my brother and I did 50 years earlier, with the same hit n miss results.

Enjoyment - Comments regarding inappropriate and distracting audio notwithstanding, this is an enjoyable, useful edit. As mentioned earlier, on a sheerly visual level, this is astonishing. Another editor, Roger Rmjet I believe, could make wise use of Soderbergh’s video rendition for an update of his Raiders serial.

On an aside, it would be nice if the editor could participate and receive feedback from this community. It might be mutually beneficial. That said, I am grateful he is making his edits available and encourage others to view them.

Extra thanks to TM2YC for showing the route to this one.

This isn't your typical fanedit with craftsmanship in the visual details and improving upon a movie's weaknesses by careful cuts. It's rather a b/w fanmix that would be well suited in a discotheque or club, projected at one wall while the crowd throws occasional glances.

As TM2YC wrote there's no visual editing beyond loosing the colors. Admittedly, he did some grading so his b/w looks a bit different than just killing the color in your movie player. As such, I find it very hard to make the rating system fit, is "done nothing" a superior "10", catapulting the overall rating amongst the finest edits?

I have to admit that my enjoyment is very limited when watching this a a dedicated movie. I guess if you're a music geek or do a lot of music mixes you have to admire how much work probably went into the selection, but imho that doesn't translate into a necessity to see the whole movie.

The one reason this edit is worth having a look at is to recognize how well Indie prevails facing the test of time, and he doesn't even have to walk invisible paths for this as in later incarnations. At least he's got the video quality right on this one: Unless some completely over-encoded fanedits, 2gb is a reasonable file size for this resolution.

Format Watched?
Digital
F
fanzy42 Top 500 Reviewer 9 reviews
Report this review Comments (0) | Was this review helpful? 0 0
February 01, 2015
Overall rating
8.5
Audio/Video Quality
8.0
Visual Editing
10.0
Audio Editing
9.0
Narrative
9.0
Enjoyment
8.0
Audio/Video Quality: 8
For a 2GB filesize this is pretty decent quality I guess, but it would have been nicer to keep more of the detail and grain.

Visual Editing: 10
There isn't any, so a 10 is standard. The B&W conversion is very cool though. The high-contrast photography looks gorgeous and it reveals how wonderfully old-fashioned this film looks.

Audio Editing: 9
There are some small gaps between songs here and there but for the most part this is a non-stop crossfaded/remixed experience. The radical switch from John William's heroic ochestral score, to Trent Reznor's often ethereal, unsettling and occasionally danceable Electronic music is a lot of fun. I imagine Soderbergh spent a long time selecting the music tracks and experimenting with them, as they are often timed very well with the energy of the film. Also they stop/start in time with the scenes which can't have been easy to pull off this smoothly.

Narrative: 9
One of the goals was to kind of put narrative on the back burner. However it's still visually very strong without any dialogue or SoundFX.

Enjoyment: 8
This is a unique experience worth checking out but Reznor's repetative music isn't "my cup of tea", I don't hate it, I just don't love it. Also as a "Faneditor", as opposed to an "Editor", learning lessons about editing rhythms was largely moot, as they are typically dictated by the existing material. However, the new score was kinda hypnotic in a good way and had the strange effect of making you see things that aren't there. e.g. soldiers swaying in the back of a truck appear to be grooving to the music and the hammer during the final sequence seems to be pounding out the beat.