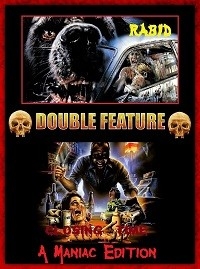 Join the Forum Discussion
Tweet
Brief Synopsis:
This is the first of a double feature series of horror stories cut to one hour.
Intention:
I wanted to make some short horror stories from full length horror movies. The intention was to put all the action, story and horror in that one hour. Just like T.V. episodes.
Release Information
MP4/M4V/MOV
Cuts and Additions:
Cujo aka Rabid:
Many scenes are trimmed that holds up the story.
There is no monster in the closet, No Monster words.
The most scenes with the family of Camber are cut.
Victor Trenton at his work are trimmed or cut.
Some cuts in dialogue
Alternative ending
Music overdub of Body Double at some scenes.

Nice double feature of two Horror flicks. Rabid (Cujo) had arguably the better budget, better cast, and better source material (S King). King’s feature films, however, have a sorry tradition of sinking faster than Davy Jones metal locker, and Cujo was no exception. These are trimmed to an hour each, with mixed results.

Video - 1920 X 1080p MPEG-4. Noticed one or two messy transitions with Rabid. Closing Time, less so. There well could have been several problems, but the second film was a low-budget slasher with corresponding cheapie production values.

Audio - 2 Channel AC3, 128 Kbps. No subs (ha ha, yeah, would have been little more than Woof Woof and Eeeeee). As with the video comments, problems are more noticeable with Rabid. Fades are quick to the point of abrupt (eg: 7.35). Again, more forgiveable on the second feature.

Narrative - Rabid suffers far more than Closing Time. Dee Wallace’s character: Is she sleeping with her husband, her brother, her nephew, her son? No, it’s a musician, apparently. That whole marital affair cheatin’ business is cut to the point of confusion, and really ought to have been jettisoned altogether. Ditto the food poisoning subplot. Both seem useless and could be removed. The plot hurtles along, barely making any sense.

Not so, hooray, with Closing Time (Intruder), an unapologetic dead teenager flick. Ain’t no confusing plot here. Set 'em up - chop 'em up!

Enjoyment - Two films on one mp4 file. No chapter breaks? C’mon. At least put a break between the two films. Strikes me as an oversight.

For me, Rabid is grating, dumb, and seemed to go on forever. Part of the problem is that, Cujo is a film that suffers airs. A cheap horror premise with big studio gloss and pretensions. Typical of King’s output at that time, almost every single character is a piece of shit. Cheatin’ wife, her asinine trombone blowing bedmate, trailer trash mechanics, the whiney little boy. As Metallica would howl, “Kill ‘Em All,” and get it over with. Dog included. Maniac did a nice job with the ending, however. Stick around.

Closing Time, hells bells yeah! Terrific, bass heavy music score. Lots of inventive ways of killing. Even some attempts at artsy photography which is appreciated. Sequence where the killer is distorted, funhouse-mirror style is cool. And the zoom montage of the running, checkout girl. Love that grocery store, too. It’s huge, but stocked by an insane person. One aisle has laundry detergent, next to spray starch, then to bottled water. Unlike Rabid, this film is funny and has more authentic soul. As a genre slasher, the second film is way better!

This is difficult to rate, since the first part of this set is weaker, and less enjoyable than the closer.
Chances are, I’ll rewatch Closing Time more than once. Closing Time is the keeper on this two-fer.

A/V Quality - 10
Beautiful picture quality and I had no issues with the audio (I watched it on my computer through VLC).

Editing - 9
Great work by Maniac to cut these movies down to an hour. Only two cuts felt a bit jumpy in the Cujo segment, otherwise solid editing.

Narrative & Enjoyment - 9
This was a really fun way to rewatch some horror flicks. I quite liked that the horror was "kept on top" and all the boring BS was excised. Recommended for fans of 80s horror.

Do you recommend this edit?
Yes
Format Watched?
MP4/AVI/etc. (HD)
Comments (0)
Was this review helpful to you?
Fanedit.org does not host, provide links to, or sell fanedits. Do NOT contact us for such things. For more information please read our FAQ.
close
Toogle Down