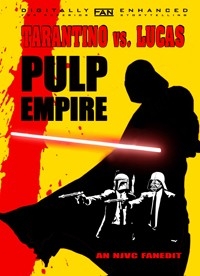 *Review and Rating updated (because this edit has grown on me)

I just finished watching the final cut of Pulp Empire. I had previewed an earlier version, I think it was just the draft before the one njvc ended up releasing.

I'll start by saying that with an edit of this kind it is pretty much impossible to please everyone, similarly chances are not everyone will agree on the creative choices made by the editor. With that said. A lot of what I say in this review is not about the technical quality and the editing, but rather the creative choices, what worked and "felt right", and what didn't work for me and in my opinion didn't "fit". So a lot of the review is going to be ("music cue, i liked" "i wasn't 'feeling' this") so not the most articulate review ever!

I must admit I was a little biased going in as a result of watching some of the sample clips that njvc posted (i.e. Darth Vader - Hugo Stiglitz is GENIUS).

- awesome intro scene and opening credits, music worked, and black and white made it feel like the opening to Kill Bill

Chapter 1
- awesome music cue with "like we're being watched!"
- Pai Mei, mixed on this, good idea, and an Asian master kind of fits with yoda's zen jedi master, but i dunno, i guess mentally it was a bit incongrous to me with yoda's grunts and hmmms, and the pai mei voice
- music cue "you know him?!", excellent

Chapter 2
- music cue, for me it didn't work, when he cuts himself free from the ice cave
- freeze frame character intros, i liked it!
- Bernard Herrmann Taxi Driver score! njvc must have decided to pander to me for a good rating ;), this was a sexy choice IMO
- music cue "well i'll see you in hell" excellent
- Imperial probe droid music cue, awesome
- Darth Vader Hugo Stiglitz FAVORITE PART OF THE ENTIRE EDIT, awesome
- split screen works surprisingly well for the battle
- sneaky job of sneaking in a clip of luke in the death star trench!

Chapter 5
- Joni Mitchell, i knew exactly what njvc was going for (a la Jim Croce Django) and this really worked perfectly for me
- and awesome music cue, getting out of the millenium falcon to lando intro
- across 110th street, i like the song anyway, so i liked that you included it
- music while leia is worried about 3PO,not sure if this was intentional but i liked that it sounded as if it was playing on the radio in the room
- perfect music cue, with Vader at the end of the table and Han starts shooting at him
- i liked the music cue when darth vader overseeing carbon freezing
- music cue, "I love you, I know", (and parallel between Han being frozen in carbonite, and The Bride buried alive in Kill Bill Vol 2 excellent! not sure if that was intentional or not)
- music cue, Lando's security taking away storm troopers, enjoyed this


Chapter 6
- quick elapsed time progression matched with vader's breathing was a nice touch
- i initially liked the ecstasy of gold remix, but then went it shifted in fatboyslim/chemical brothers (the brother's gotta work it out) remix, for me it just didn't fit with the scene
- but excellent spot to stop/pause the music as vader falls over the edge
- Awesome O Fortuna! Really liked this choice
- crescendo matching with Luke getting his hand sliced off, very nice
- im probably the biggest neil young fan on the forums, (only TMBTM surpasses me), i didn't like Old Man at all, the slideshow, and especially the inclusion of prequel footage, although luke's screams of "noooo!" sort of matching up rhythmically was a nice touch

End Credits
- I liked this, title cards intercut with some more footage

Features
- loved the split screen comparison special feature, "about this edit" (also gave some more insight into some of the creative choices you made!)

Some General Thoughts/Comments
- partially out of chronological order narrative, I get it, cause Tarantino's narrative is often this way, but for me it didn't completely work (the 1st chapter with yoda, maybe cause it gave the edit a bit of a slow start, but you can argue its stylistically like Reservoir Dogs which has just a bunch of dialogue in that opening diner scene)
- overuse of slo-mo, there was a lot of it, but i guess it was necessary as a kind of editing shortcut/trick/work-around, but at the same time because of how much it was used it became a part of the style of the edit


So what more can I say. njvc is a bold, brave, risktaker IMO. This is what fanediting is all about, simple fanfixes are entertaining but projects like this are almost always more interesting. I have a lot of respect and admiration for this sort of outside the box thinking. I have some idea of what a huge rescoring/audio editing undertaking this was and how challenging it is to rescore a movie like the Star Wars for nearly the entire movie (impressive, most impressive).

I'm going to show this edit to some of my friends who are big time fans of both star wars and tarantino, so I'll be interested to see what they think.

Format Watched?
DVD
Was this review helpful to you?