Brief Synopsis:
'Pirates of the Caribbean: Dead Man's Chest (Extended Edition)' adds 15 minutes of new material, which complements various scenes to give more information about this world of ships, pirates and adventures. We get to see more funny moments, a whole new restored dice game between Will Turner and Davy Jones, the story behind Isla Cruces and an alternate ending.
Intention:
As a fan of Pirates of the Caribbean series (more the first three than the fourth one), I noticed no one has ever worked on an Extended Edition of Dead Man's Chest and At World's End, mainly because of the low enthusiasm on the sequels, so I wanted to make an extended edition of both. First was At World's End, which can be found here too, and now i submit Dead Man's Chest to complete the extended edition cycle of the saga. Even when the sequels have some problems, I enjoy them a lot, and i'm sure there must be some people who find the sequels as good as i do. In my opinion, these scenes help a lot to the narrative and deliver some important information...or well, most of them. I'm sure real Pirates fans will appreciate these new additions. 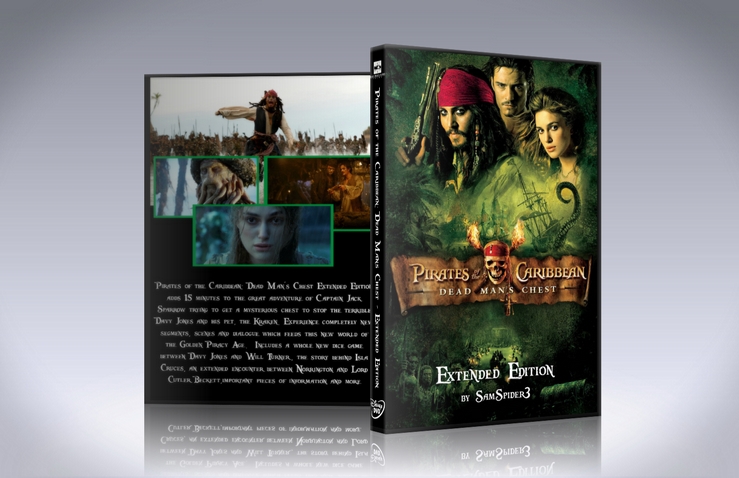 Will confronts his father after being whiplashed

Do you recommend this edit?
Yes
Format Watched?
Digital
F
flounder Top 10 Reviewer 160 reviews
Report this review Comments (0) | Was this review helpful? 0 0
January 03, 2019
Overall rating
9.8
Audio/Video Quality
8.0
Visual Editing
10.0
Audio Editing
10.0
Narrative
10.0
Enjoyment
10.0
I did not expect a few deleted scenes to spice this movie up so well, I felt like I hadn't seen the move in years! I followed the list of changes while I watched and I much admire the amount of work well done with the audio reconstruction, especially. So, the cuts were invisible, the added scenes were interesting, adding to the narrative and my enjoyment.

The only negative is the bitrate used: it was OK but it would have deserved a better bitrate so the amazing details would've come to life. Proper bitrate would also make this a viable basis for other edits. Please, SamSpider3, would you re-encode this using a better codec or bitrate?? I will fix this negative if you do! Please..

Do you recommend this edit?
Yes
Format Watched?
Digital
P
pahakokki
Report this review Comments (1) | Was this review helpful? 0 0
September 30, 2016 (Updated: December 17, 2016)
Overall rating
9.1
Audio/Video Quality
10.0
Visual Editing
10.0
Audio Editing
10.0
Narrative
8.0
Enjoyment
9.0
The Dead Man's Chest has always been my least favorite movie of the Pirates of the Caribbean trilogy (if trilogy) , maybe because I'm a fan of Barbossa, or hate the cliche of the love triangle, or center too much on Will or a mixture of the three, but there is something that I can not enjoy it as much as enjoyment COTBP or AWE, although this edition not fix all the problems I had with the movie, gave me an entertaining experience.

Most of the scenes do not add much to the movie (unlike AWE), but it is a successful work, it lets see a movie that you love and see it with the addition of another interesting scene. Despite its enormous length, it feels short, a little swollen maybe (but partly the fault of the original film) and the transition between scenes is perfect.

Recommended only for fans of the sequels.

Do you recommend this edit?
Yes
Format Watched?
Digital
A
a112 Top 500 Reviewer 11 reviews
Report this review Comments (0) | Was this review helpful? 0 0