Pennywise: The Losers Club & It Returns 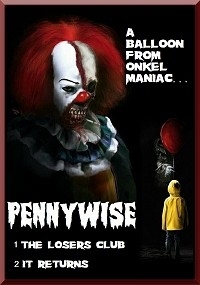 Join the Forum Discussion
Tweet
Brief Synopsis:
'It' the 1990 tv show edit to one movie in two chapters.
Intention:
I created this tv show in two edits. 1. The Losers Club, in which a group of children has to deal with a killer clown. 2. It Returns, 30 years later the clown is back and the same group has to deal with him again. I separate the children and the adult's footage in these two chapters and overdubbed it with the soundtrack of the remake of It (2017).
Special Thanks:
Hubunkey, for his idea of this project.
Release Information
MP4/M4V/MOV

PART ONE: THE LOSERS CLUB

As a rather large and longtime fan of the original miniseries, I know it front-to-back... and that may be working against me here. What stood out to me most was the massive amount of content removed. As list will follow, but first, the opening with Georgie entering the basement for the wax is brilliant. "Derry 1960". Loved it. so much. But it goes downhill for me after that:

- Ben's first encounter with IT is cut short. IT never grabs at him, and this his entire experience to that point is a simple hallucination.
- Ben's conversation with Beverly outside the school is cut, but this is where he learns who she is, and establishes lines of communication between them. This cut makes the scene later by her house seem very bold of Ben.
- Ben's repetition of "Beverly Marsh" over and over is removed, but this shows his infatuation with her. It seems childish, but he is only supposed to be 11 or 12.
- Ben writing "January Embers" and his homelife is removed, but this scene establishes why he goes to the Barrens alone, as well as showing that he is the author of the poem he leaves on Beverly's doorstep.
- The building of the dam is gone! This shows the bonding of the group.
- Eddie's hypochondriac mother is not shown at all. This scene helps us to understand why Eddie is the way he is, and without it we don't understand why Eddie doesn't shower with the other boys.
- Cut Bill's "Magic Stones" story from Richie's flashback. This sets up Bill as a writer and shows some insight into the personalities of the other "Losers" via when-I-grow-up aspirations.
- Richie coming back up after the werewolf incident and telling everyone what he saw is important because it establishes that Stan is now the last one who has not yet run into IT. And everyone else begins to recognize that they have all experienced something.
- Inter-cutting Stan's Mummy Encounter totally re-shapes the timeline of events, but it works alright, the transition feels a little weird, though.
- Cutting Bill's "Help Me" monologue is a tragedy. A real American tragedy. It shows him as the rallying point for the group.
- The font for the credits is not what I would have expected. It's not ironically goofy, or modern sans-serif, or old-timey serif.
- The text alignment seemed to change for one set of credits. Everything is entered except one credit plate that is left-aligned.
- The handprint balloon and Pennywise doll struck me as weird. Not because they don't fit thematically, but because I've personally never seen any other credit sequences that do this.

For the purposes of this half of the review, I am assuming that IT is simply a magical clown, as much of the mythos is removed from this story. I will also not hold this half of the edit accountable for any content in the source miniseries; Only the content present within the edit itself.

- Does Ben arrive in Derry the same night as he receives the phone call? Because after we see Ben arriving, we see Stan go have a bath and Mike's visit from Pennywise at his house. Then Bill arriving in the morning.
- Ben, Bev, Richie, and Mike have each had run-ins with IT in the last 24 hours, but none of them mentions it, even in passing while at the restaurant? I mean, Richie had blood all over his face.
- It's not really clear why Eddie, Bev, and Bill are so amused that Richie has called Stan "a dead man" if he hasn't left (for Derry) already.
- When did Richie pick up the phone that he threw down after Mike informed them that Stan was, in fact, a dead man?
- What does Stan mean by "in the deadlights"? In this edit, the only definition we get is from Pennywise near the end when it says it will make them lose their minds. Doesn't really seem like a destination. This is confusing.
- The flashback that occurs when Mike says the murders started up again "earlier this year" seems to imply that the little girl from the beginning of part 2 -- which was just the previous day -- is the first murder, but in the opening monologue he says, "another murder today".
- When they go upstairs in the hotel, why are they all entering their rooms in sync, and looking at each other. Seems weird, no?
- How long were they sitting in the downstairs fireside room that Henry was able to esacpe Juniper Hills, get to the hotel, and hide in one of the rooms?

In all? It was alright. Not terrible, not amazing. It doesn't really create a *new* narrative, nor does it seem to attempt to re-present the original material in the best possible light. If this for you? If you really want the kids and the adults completely separated and a heavily truncated runtime, then this may fit the bill for you.

Lastly, and some may not care about this, the opening and closing titles really make this *look* like a fan edit. If I showed this to someone who had never seen the original, they would certainly be aware they weren't watching a studio release.

Do you recommend this edit?
No
Format Watched?
MP4/AVI/etc. (HD)
Comments (0)
Was this review helpful to you?
Fanedit.org does not host, provide links to, or sell fanedits. Do NOT contact us for such things. For more information please read our FAQ.
close
Toogle Down