Brief Synopsis:
Two years ago, in the final battle between Superman and Zod, Metropolis was destroyed. Now the city is slowly rebuilding, but some wounds never truly heal, and a dark vigilante has emerged from the shadows to bring justice to the man responsible. Featuring material from both versions of the film, Mr. Blue presents a faster paced, action packed recut of the most highly anticipated comic book movie of all time

Intention:
To streamline the film, shaving down the superfluous plotlines and including additional music cues to strengthen certain dramatic scenes and to call back to former iterations of these iconic characters. I wanted to make a less confusing, better paced, and much easier to watch film with at least a little more respect for the character's it portrays, as well as the audience watching it.
Other Sources:
- Batman Begins OST, The Dark Knight OST & The Dark Knight Rises OST (James Newton Howard & Hans Zimmer)
- Man of Steel OST (Hans Zimmer)
- Man of Steel (2013)
- Superman Returns OST (John Ottman, based on themes by John Williams)
- Call Me Mr. Blue (The Fleetwoods)
- Ghostbusters (1984) 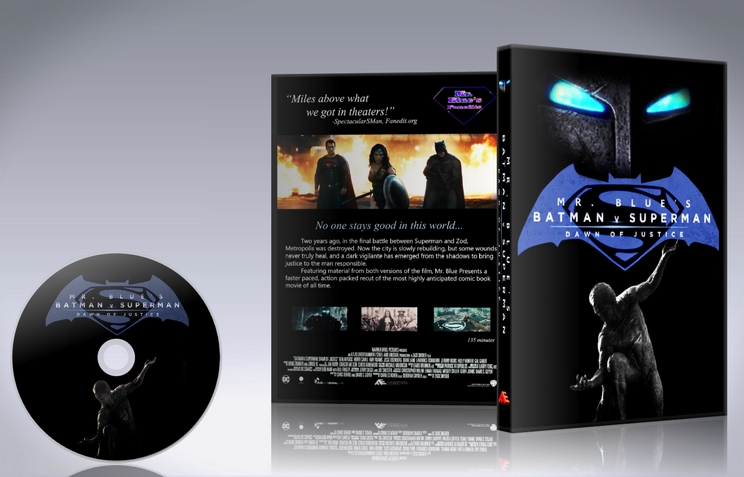 Do you recommend this edit?
Yes
Format Watched?
Digital
D
damian1978 Top 500 Reviewer 19 reviews
Report this review Comments (0) | Was this review helpful? 0 0
January 25, 2018
Overall rating
6.8
Audio/Video Quality
10.0
Visual Editing
8.0
Audio Editing
8.0
Narrative
6.0
Enjoyment
6.0
POSITIVES:
-CONCISE
-Clever idea to use the mountain scene to introduce Clark
-Great musical transition from the mountain scene to the apartment scene
-Love the usage of the interview with Mrs. Santos early on
-Using "a fist” as the line before the boxing scene - BRILLIANT (how was this not the original version? - it literally sets itself up)
-I like that you spaced out the two Kryptonian ship scenes. It makes it seem like Lex built a connection with the ship, which sort of explains why the AI is so willing to create Doomsday
-Love the music in the BvS fight scene
-So glad you replaced the bagpipes during Superman's funeral with beautiful music and the Jor-El monologue
-Glad you cut "the bat is dead - bury it"
-Love that the dirt rising was cut out and that it ends with “just a feeling”
-Love the use of S.R. and T.D.K. music at certain parts

NEGATIVES:
-A few audio/visual problems in scene transitions (there's an audio glitch in the transition between the two mountain scenes)
-Dream sequence was really short and interrupted an integral scene - kind of jarring
-For the dream sequence, I wish there was more of a direct comparison between Superman and the monster (maybe instead it would include Superman and his Batman's parents’ killer)
-With scenes about the Capitol Building and Wallace Keefe being cut, I thought Batman fighting Superman would not be a part of Luthor’s plan. Because of this, adding the Martha and Lois Lane kidnapping stuff made no sense to me. Plus, the plot (and his scheme) became way more convoluted.
-Lois’ “don’t I know you” makes no sense without the Africa subplot
-Lois and Lex have no relationship with each other, so the tension for the scene on top of Lex's building comes out of nowhere
-Don’t love the vocal delay/background voices when Superman gets hit with Kryptonite gas
-How does Superman know Lex is in the scout ship?
-Wish you kept “she with you” banter - establishes that these three have no former connections
-Without some form of Lois' plot, Lex wouldn’t be going to jail
-Not sure if Batman and Superman's motivations are completely justified without the exposition that was cut
-During the fight scene, there needs to be more of a reason for Superman to suddenly want to fight Batman rather than negotiate