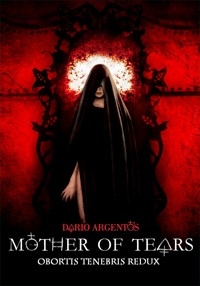 Join the Forum Discussion
Tweet
Brief Synopsis:
The final instalment of the “Three Mothers” trilogy, completely reworked to complement the style of the preceding films, Suspiria and Inferno.
Intention:
“Mother Of Tears / La Terza Madre” was a hugely disappointing conclusion to Argento’s Three Mothers Trilogy. The intent of this edit was to collate the best material from the film, dispensing with the unnecessary and often risible plot twists, with a mind to bringing the trilogy to a more natural and coherent conclusion.
Special Features
MKV 720p
VIDEO SPECS
- 4,3gb .MKV file
- Original 2.10:1 widescreen A.R.
- Video: h264, HD-720p, 1280×586, 24fps.
- Audio 1: new 5.1 mix (DTS lossless 1.536 mb/s)
- Audio 2: new 2.0 mix (AC3 192 kb/s)
Editing Details:
Although rather short with its run time of 66 minutes, the “Mother Of Tears : Obortis Tenebris” redux should hopefully prove an enjoyable fan edit, continuing the atmosphere of its legendary precursors.
Hail Mother!
Cuts and Additions:
* A new and original introduction is presented.
* Many scenes have been re-sequenced.
* Almost 40 minutes of unnecessary footage has been deleted.
* The ludicrous ghost of Sarah’s mother (played by Daria Nicolodi) has been completely removed, as has the subplot concerning Sarah’s mediumistic experiences.
* The original ending, which proved to be unsalvageable, has been completely cut, being replaced by an epilogue voiced by Varelli.
* The voices of Mater Lacrimarum and her disciples have been altered.
* Some special effects have been enhanced.
* The whole film has been recoloured.
* A completely new musical soundtrack has been compiled, including Goblin’s original score and other pieces from Argento’s films.
* A startling new audio mix (featuring re-synched elements and some completely new effects) is presented in DTS 5.1.
No art

Like many horror fans, I used to be a huge admirer of Dario Argento's work. From The Bird with the Crystal Plumage right up until Opera, I more or less enjoyed every one of his movies. For me, his masterpieces were Suspiria and Inferno, the first two chapters in the infamous "Three Mothers Trilogy". They were full of inventive ideas, startling use of colours, hypnotic music and some breath taking photography. However, by the time our Maestro came around to finally completing the trilogy with Mother Of Tears, the intervening years had made him a very different, arguably less focused film maker. Indeed, some may claim he just cared less about his work. The result, unsurprisingly, was a mess of poorly executed ideas which seemed to confirm the Argento we came to know and love was all but gone. So disappointed was I with the film, I never really thought I would ever see it again.

Recently however, having been looking through some of the fanedits I've missed, I came upon Dr Sapirstein's Mother of Tears:Redux and having read Neglify's and TMBTM's postive feedback, my interest was piqued enough to venture once more into the world of the Three Mothers.

The first thing to applaud here is the picture quality. It looks absolutely gorgeous on the MKV version I viewed. Not only that, but the colour correction work here by Dr. Sapirstein is so impressive, that you would never ever think the film had looked, or indeed should have looked any different. I would have perhaps pushed the envelope even further and used more of the colour palette which was so startling in both Suspiria and Inferno, but admittedly this would not be easy, as despite the wonderful picture quality on show here I'm afraid Federic Fasano's photography still comes across as "flat" at times.

Sonically, the DTS mastered track sounded nice and clear, but I do wonder about the levels which were administered during the mix, as occasionally my speakers began to crackle a little (particularly during the first murder scene). Now, either it's my speakers at fault (which is possible) or the audio gain was not limited to the maximum -3db. I'm not sure which, but it was slightly annoying to have to turn down the volume during some scenes. Other than that however, the use of music from Inferno and Suspiria works a charm in making Mother of Tears feel more part of the trilogy. Before this, it always felt like an imposter, trying desperately to fit into the worlds of Argento's former work. Hearing Goblin's hypnotically scary Suspiria theme and Keith Emerson's funky Inferno music, means that's no longer the case, at least musically!

The choice of scenes to cut were more or less perfect, and allows the film to get on with the task at hand. True, as TMBTM has pointed out, some trimming of the gore scenes would not have gone a miss, but I can live with them. Despite this however, as the movie headed towards the climax of what should be an epic ending of either the world, or the world of the dark witches, the problems of the original movie truly rear their ugly head for all to see. The original ending was horrible beyond words, so the task at hand to salvage this was more or less impossible. Dr. Sapirstein makes an attempt to use the voice-over by the architect Varelli, which I believe is from Inferno, but I'm afraid it not only screams "edited", but is still wholly unsatisfying.

Having said that, Mother of Tears:Redux is still an excellent piece of fanediting. This was a truly awful movie beforehand, so the fact that it's now been turned into a watchable, entertaining albeit flawed viewing experience, well I can not heap enough praise onto Dr. Sapirstein's shoulders. The editing is flawless, even taking into account the rushed feel of the ending, and whilst I still don't believe it deserves to belong in the same trilogy which has Suspiria and Inferno as it's predecessors, it nevertheless comes highly recommended as a lesson to all faneditors who believe a movie is unsalvageable.

I've avoided watching "Mother of Tears" for this long. Really I've avoided most Argento movies from the 90s and 00s because I'm scared... Anyway... I finally watched "Mother of Tears" this week and yeah it sucks so hard. For me I didn't care if the plot was dumb or boring. I was hardcore let down by the look, sound and style of the film.

The new music is fantastic. Suspiria's score is iconic for a reason and Inferno's music is epic as all hell. Mother of Tears' non-soundtrack almost put me to sleep.

And the colors. Holy shit, this fanedit looks a million times better visually.

Everything technically is top-notch. The HD picture looked fantastic to my 480p loving eyes. The audio track sounds perfect to my deaf ears. The only negative edit was ... oh wait, nothing was wrong!

As far as the narrative improvements, yeah this edit is better. It's still nowhere near as epic as it needed to be, but the Doc did the best he had to work with. It was too short for my personal tastes but that's a small price to pay for not having to see or hear Sarah's mother ever again.

I enjoyed the hell out of this edit. If I'm ever going to watch Mother of Tears again I can assure you I'll watch this fanedit over the theatrical cut any day of the year.

As I wanted to make an edit of this movie a long time ago I was very interested in watching this one and I'm very pleased.
Entire useless and sometime silly looking subplots are gone, for the best. The addition of new music work very well. The colors are vivid, I liked it as well as almost all the changes DrSparistein made. The ending is happening real fast, but it left a better taste in your mouth than the original one.
There are some scene where I really felt like watching the third part of the trilogy. And that was never the case when I watched the original. :)

Now... what I would have done: perhaps it's just me but I find this movie really more disgusting than Suspiria and Inferno. Those two were horror movies, no doubt about that but they were also kind of "classy" if you know what I mean. In Mother of Tears it's like Dario knew the movie will be bad so he throws over the top gore and disgusting visions just to try to top the actual horror movies ala Saw etc... Anyway, just my feeling. So I would have remove a little bit of the gore here and there. But alas, the gore is one of the only thing the movie has to offer... so well.

Just another thing. A little error during the ending, nothing too big, just something that the hardcore fans of the trilogy can notice: before the end credit, during the ending speach by Varelli, when he says "Mother Tenebrarum", you show a shot of Ania Pieroni, the actress playing Mother of Tears (Lachrymarum) in Inferno. The scene is set in Rome, she is Lachrymarum. Just a little something that struck me.

Very good work. the movie is, IMO, as salvaged as it can be. To me that means, still not good, but watchable as a third entry in his Three Mothers trilogy.

Do you recommend this edit?
Yes
Comments (0)
Was this review helpful to you?
Fanedit.org does not host, provide links to, or sell fanedits. Do NOT contact us for such things. For more information please read our FAQ.
close
Toogle Down