Man Who Knew Too Much: The Scribbling Cut, The

Brief Synopsis:
Part Special Project/part Fan-fix of a Hitchcock classic, this edit favours the parent's perspective with an aim to keep the audience just as much in the dark. Cuts and trims for pacing have been made with the modern viewer in mind, along with the removal of unnecessary exposition and awkward humour. The intro, outro and Albert Hall sequences have also been re-scored with more recent and polished recordings (original audio also included).
Intention:
I had four main aims with this edit:

- Improve the pacing with a modern audience in mind.
- Keep things from the parent’s perspective wherever possible, without compromising on narrative. This way we are in their shoes, we are just as much in the dark, and more tension and uncertainty is created because we don’t know where or how the boy is.
- Tone down the comedy/antics during the Taxidermist scene
- Re-score some of the film with cleaner re-recordings that have since been made available.

The latter was an idea that came to me part way through editing. I noticed how horribly distorted the original audio was during some of the score’s crescendo’s, and I wanted to see if there was a cleaner recording that could be used to update it.
Additional Notes:
Two audio options are available. The default audio features re-scored versions of the intro, outro and Albert Hall Sequence. The second audio option is the original Mono.
Other Sources:
Visual:
-FE.org Netflix logo
-FE Source warning
-Scribbling Man branding

Audio:
-Medley: Cantata/The Storm Clouds - From "The Man Who Knew Too Much" (taken from "Bernard Herman Film Scores)
-The Man Who Knew Too Much - Prelude (The City of Prague Philharmonic Orchestra)
Special Thanks:
- My siblings and housemate, who agreed to be my guinea pigs and watch the edit prior to release.
- Malthus for poster art and tagline
- TM2YC and DigMod for feedback on clips
- Everyone who contributed to title brainstorming
- Hitchcock, for making such cracking films.
- Anyone else I may have forgotten!
Release Information:
Digital
Special Features
Two audio options.
Editing Details:
I’m a fan of making lots of small changes, and seeing how little trims can affect pacing, especially with older films that rarely get attention. Having said that, this is probably one of my more extreme edits in terms of cutting material, given that whole scenes are removed (something I tend to avoid with my B+ edits).

Most of my time was put into the re-scoring. Although re-recordings of the same pieces, due to the fluid tempo the tracks did not fit very well at all, and the dynamics and feel could vary hugely between versions. There was much splitting, speeding up and slowing down of different bits of audio in order to make the music sync up with the players and events happening on screen. In some cases , hard cuts were instead made and the audio moved, with reverb applied to cover the gap.
Cuts and Additions:
The Gist:

I sometimes forget to note down cuts, so this should be complete, but it's possible some trims here or there aren’t mentioned.

• 0:00:00 – Added FE Source warning
• 0:00:09 – Added FE Netflix logo
• 0:00:13 – Added Scribbling Man branding
• 0:00:34 – Rescored opening credits with cleaner recording of Herman’s “Prelude”
• 0:03:07 – Trimmed interior shot
• 0:03:14 – Trimmed exterior shot
• 0:05:38 – Cut awkward reaction to “The muslim faith allows for few accidents”. Now the Frenchman asks to sit down straight away.
• 0:07:32 - 0:07:54 – Trimmed bus arriving into Morocco. One shot removed, the rest simply shortened.
• 0:010:41 - 0:10:53 – Trimmed coach arriving at hotel
• 0:24:23 - 0:24:39 – Trimmed Morocco festivities
• 0:30:38 – Cut “Yes, of course…” after Husband-spy says “I think I’d better go with them”
• 0:35:49 – Cut shot of man on other end of line when father is threatened - now we simply hear the voice over the phone. The dialogue was trimmed to accommodate this.
• 0:47:56 – Trimmed plane arriving
• 0:048:38 – Cut first shot of spy-organist
• 0:48:56 – Cut second shot of spy-organist
• 0:49:05 – Cut third shot of spy-organist
• 0:49:19 – Cut spy-organist in telephone booth (there’s some bad miming going on here, and it’s entirely unnecessary visual exposition)
• 1:04:35 – Trimmed “comic relief” in Taxidermists. Less antics (man doesn’t come and grab sword fish, man with leopard just gets out the way, then steadies lion.)
• 1:04:44 – Jimmy Stewart’s hand is caught in Tigers jaw for less time.
• 1:04:49-1:04:50 – Smoothed transitions between following shots: shot of men grabbing door as Jimmy leaves, Shot of lion, shot of lounge. This feels more natural as it concurs with the time of the music.
• 1:08:29 – Mirrored shot of woman walking upstairs
• 1:08:37 – Then, following on from above, we cut straight to her walking into the meeting with the assassin. She does not ask to come in.
• 1:09:31 – Cut “Music is less in your line than marksmanship” – a badly delivered and easily misinterpreted line. The putting down of the assassin gets a bit much.
• 1:10:38 – Cut exposition (we can work out that they got the assassin from Marrakech. We see him in Marrakech and it’s mentioned later.
• 1:11:07 – Cut “a very clever disguise, I must say”, and trimmed how long spy-husband pauses for.
• 1:12:03 – Trimmed assassin leaving church
• 1:23:00 – Cut kidnappers sneaking out building and driving away.
• 1:23:21 – Cut kidnappers arriving at embassy, along with kitchen kafuffle and the staff talking about the embassy being odd and secretive (this also means we don’t have the shot of the British agent shown to be undercover, but it doesn’t really have much relevance anyway)
• To cover the above there is a slight re-ordering of scenes. Instead of going to Jimmy, we go to Doris arriving at Albert Hall (re-scored using music from scene of kidnappers arriving at embassy).
• 1:23:53 – After Doris arrives and enters the building, we briefly cut away to Jimmy climbing the bell…
• 1:24:22 – ...and then we cut back to Doris inside the foyer and stay with her.
• 1:26:45 – Re-scored Albert Hall sequence with cleaner recording. The tempo and feel is very different from the original recording, so there is A LOT of editing here to make the audio sync with the visuals.
• 1:32:07 – Due to trouble syncing, we briefly transition back to the original mono recording here, and then transition back again after the drum roll.
• 1:32:15 – From this point on, there’s lots of trimming to help increase the pacing as we get closer to the shooting. Approx. 67 seconds of audio from the Albert hall sequence were cut (literally, just an entire section that was repeated on the old recording, but isn’t there on the new), and shots were trimmed or removed to fit this (mostly Jimmy Stewart waiting around). I tried to keep as many shots as possible, while increasing the pace and sense of urgency.
• 1:36:05 – Cut baddy British dude awkwardly saying “I have to go now”. Now he just says “Excuse me”.
• 1:42:23 – Cut phone conversation with prime minister – now after calling up and Jimmy saying “Just tell him the woman that saved his life would like to speak with him”, we cut straight to the party at the Prime Ministers house (which also means we skip the exposition in the car on the way there).
• 1:51:44 – In the original film, Hitchcock loops the same shot of husband-spy falling down the stairs. It’s probably done to make it look like he falls down further, but it’s a pretty obvious and dated edit. Now the shot only appears once.
• 1:52:18 – Rescored outro music, which is a reprise of the opening piece
Poster by Malthus and The Scribbling Man 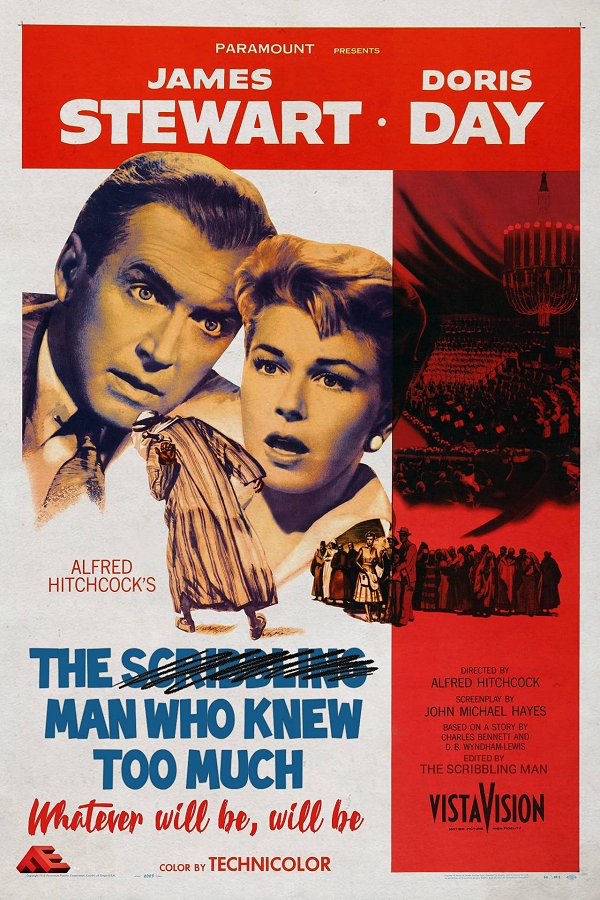 There are no user reviews for this listing.
Fanedit.org does not host, provide links to, or sell fanedits. Do NOT contact us for such things. For more information please read our FAQ.
close
Toogle Down