Brief Synopsis:
'The Speeding Bullet Cut' streamlines 'Man of Steel', removing a lot of the flashbacks, and excludes 99% of the initial scenes on Krypton, while also minimising some of the destruction shown in the original.
Intention:
I found the opening on Krypton really didn't offer anything interesting, and just helped to bog down the film. It's very long, and is largely just a series of exposition dumps. I also hoped to increase the pace, minimising the stuff that just wasn't interesting, or didn't make sense to me, as well as not giving too much time to scenes that most people already know about (Superman's origin, etc), and hoped that focusing in on the present day story would make for a more interesting & focused film.
Other Sources:
Hans Zimmer - Man of Steel Soundtrack
Release Information:
Digital
Editing Details:
I edited the film in Adobe Premier Pro, focusing on making a coherent & shorter movie. I've had a lot of editing experience, and did this while I had the downtime, but it only took about a week.
Cuts and Additions:
99% of the prelude is gone. The film opens with Krypton exploding and Kal-El's rocket heading to Earth, and you also hear Kal's mother say "Make a better world than our's, Kal", in the titles. I played around with including some of it, but ultimately wasn't able to cut it in a way that I was happy, and found it useful. To me, the prelude is a time suck and a slow start to the movie. Too much exposition dumping about character's who aren't in the actual movie, and the stuff with Zod isn't really important. Everything relevant to the actual story is later re-explained to Clark throughout the movie.

After Kal-El/Clark's ship hits Earth, I follow the actual edit where it goes to him saving the people on the Oil rig, but I've removed the ending of that where he's floating in the water. It goes from the oil rig to the first flashback where he starts to get x-ray vision, then it cuts to him saving the bus, then to Jonathon Kent talking to him about where he came from, etc and those are the only flashbacks in the movie, until the very end.

Lois Lane's role is shortened. Lois & Clark's first interaction on the spaceship is gone, and she isn't shown in the area. It's implied she had just heard about the story/used her journalistic skills, rather than actually witnessed anything. I couldn't entirely cut her story about the spaceship, because it is later referenced in scenes that are necessary to the story.

I wasn't a fan of the idea that Clark had been on Earth for 33 years, and had only discovered then that he could fly. Most of the origin has been shrinked, and so when Kal's father is narrating while Clark is walking out into the snow, in his Superman suit, I cut out the part where Clark has his first attempt at flying, where he's just doing huge leaps around. Instead the scene plays out like he walks out in his suit, and then takes off flying.

When Zod first arrives to the planet, there's a lot of cutting back & forth between Clark, Lois & the military (I believe), and in my cut, I mostly stay on Clark until the part where it shows the message being broadcast all around the world.

I've removed the part where Clark goes to see a priest, and he tells him he needs to take a leap of faith. I've also removed the part where Faora talks about how "if history has taught us anything, it's that evolution always wins". I just find there's a strange message there, as it's coming from one of the antagonist's, as they give a "bad guy speech", and if I feel that coupled with the faith thing, is a weird vibe, for me. Because of these cuts, the Faora/Clark fight plays a little differently, but it's hard to notice. If you go frame by frame, you'll notice where I've sliced the scene. Basically, when Faora throws Clark against the wall, in the actual movie he rests in the rubble for a moment, but in mine, he kind of hits the ground and instantly gets back up and flies at her, and I also cut in the fist fight between them, there's a part she she slams him onto the ground, and I cut to her then throwing Clark out of the building, which makes it look like he kind of bounces off the ground, and she catches him on the rebound.

When Zod has captured Clark, and Clark's kind of dreaming, but Zod's in his mind, explaining his plan, etc, I've cut that down by a couple minutes. It ends when he explains how his Kyptonian father wanted Clark to rebuild Krypton on Earth.

There's a lot of excessive destruction in the original movie, which I've largely cut down. There's also a lot of parts where Superman unnecessary causes destruction. When Superman tackles Zod (when Zod's at the Kent home), he flies through a building for no real reason, so I managed to cut that out, and if you pay attention to the background when he's carrying Zod through the field, you'll notice the building in the background, but it's very brief. There's also a part which always really bothered me where Zod kicks a big truck at Superman, and he just calmly floats over the top of it, letting it crash into a parking lot behind him, completely destroying the lot, and setting wrecked cars all over the place. The Zod/Superman fight is shorter by a minute or two, again just to bring down the over the top destruction.

Throughout the film, I've cut lines of dialogue from the movie. During Lois' first scene with Perry White, there's a lot cut from this to remove the fact that she was at the site when the spaceship took off. I also really didn't like the part where she tells Perry "I'm a Pulitzer winner" something or other. There's a bit where Clark is talking to his Earth mum, and she says "This is just stuff, it can all be replaced", and Clark replies "But you can't be replaced". The line felt redundant, and almost sounded like a question, so I cut it. I wasn't a fan of Clark's father replying "Maybe", when Clark asked him if he should have let those kids die, so that's gone.

Like I've said, a lot of destruction has been minimised. When Clark & Zod fly through the petrol station there's numerous shots showing the explosion, so I cut that bit down. There's a part where Clark throws one of Zod's men at a bunch of trains and there's a huge explosion, I cut away before you see him hit/the trains explode. During the Smallville fight, when one of the jets hit the ground, there's less time on the explosion.

At the end of the movie, when Superman snaps Zod's neck, I found it extremely weird & tonally poor that the film then cuts to a weirdly light-hearted scene where Superman & the General are talking, and Superman's asking for privacy & trust. This scene is now the middle of the credits, and I've cut the end of it where the General asks what the female soldier is smiling about. So, in my cut, Superman's killed Zod, and then it cuts to the flashback of him as a little kid running around with a cape, and his father sees him pretending to be a hero, then it does the same ending scene as the actual movie where he finally dons his Clark Kent disguise, aka wearing the glasses.
DVD Cover art by StreetsAhead (DOWNLOAD HERE) 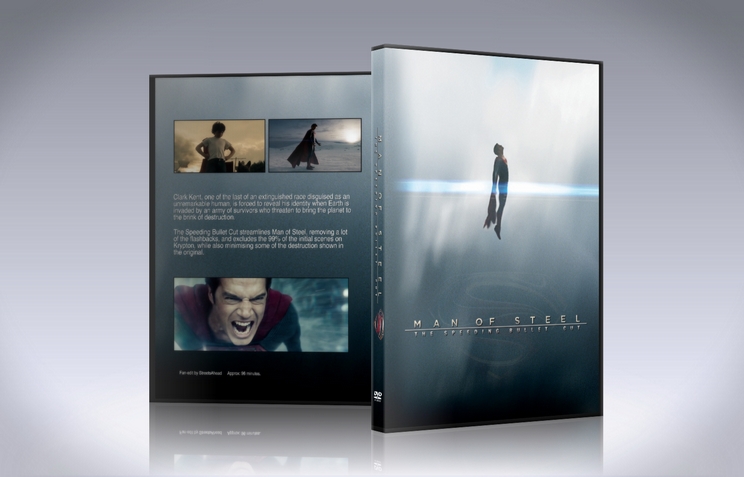 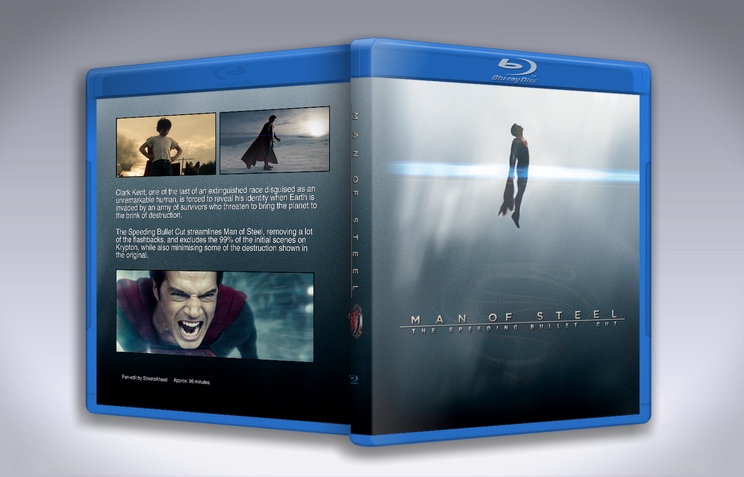 Lois being 'a friend' after she turned up for the first time at Clark's father's grave didn't really feel well at all and kind of came out of nowhere (since their first meeting was cut). Clark's discovery of the scout ship rather was abrupt as well as from one scene to the next he just appears there, but once inside the cuts flowed well and nothing was missed. Rather than playing cat and mouse, Jor-El appeared to Clark as if he had been waiting for him. Very good cuts there. Zod's global hack into all streaming devices didn't go as smoothly as written either since it always kind of felt off. The initial focus fell on Clark and Martha but shifted all over right after even though there was no inclination. Superman breaking Zod's neck came very swiftly. Whereas in the original Zod was toying with him, inadvertently giving him time to consider his options, the neck break here came about as if Superman intended to do it all along. Kind of a missed opportunity.

The remainder of the edit flowed well and I have no comments there. Cutting the Krypton flashbacks was an obvious choice and it worked great.

I recommend this edit to people who can overlook these flaws and are looking for a quick Man of Steel movie night but I don't recommend it in general. Too many obvious plot holes were created by cutting up the film rather than fixing ones that were already there.

Do you recommend this edit?
No
Format Watched?
Digital
K
kal-el Top 500 Reviewer 20 reviews
Report this review Comments (0) | Was this review helpful? 1 0
May 10, 2015
Overall rating
8.3
Audio/Video Quality
8.0
Visual Editing
8.0
Audio Editing
8.0
Narrative
7.0
Enjoyment
9.0
I have watched this edit and it a good Firstling debut. The first half is very minimalist compared to the original.... Krypton is essentially gone and some plot/character intros may at first perplex viewers but all key information is revealed if one is patient and open minded. There are only two scenes that are weakened by this approach -- how Clark finds the Scout Ship/Fortress and the transition with Lois from the Pa Kent grave to the Daily Planet. The second half plays closer to the original but has many more subtle cuts which work very well.

Some really great audio work over all, though there are instances where it could have been slightly smoother or cleaner. Majority of cuts are smart and well executed.

As already noted, the opening narrative may surprise some viewers but the story moves at a brisk pace with most of the fundamental emotional moments still in place. This fan edit succeeds in the most important respect, it entertains! While it is not my preferred my cut and could use slightly more polish, as a Firstling project it is a strong release and I recommend it.

Do you recommend this edit?
Yes
Format Watched?
Digital
B
bionicbob Top 50 Reviewer 133 reviews
Report this review Comments (0) | Was this review helpful? 2 0