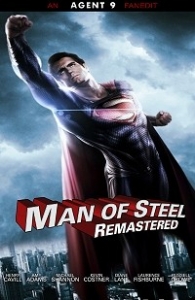 As I've said in another review, Man of Steel is not a good movie. By this I mean, it's a great example of poor filmmaking. It suffers from poor directing, poor editing, poor blocking, occasional cartoony effects, odd costume and set design choices (e.g., the giant black condoms that send the baddies to the Phantom Zone; the Nike sneakers swish in the middle of the "S" symbol) and a meandering plot (for which I blame the editing -- the script may've been far more clear). (OK, fanboys, relax, that doesn't mean you can't enjoy the original, but that doesn't in any way change the facts of the problem tech aspects of the original.)

So, let's talk about the edit:
The editor's cut a great deal of fat from the start of the movie, where we meet Jor-El and the world of Krypton. The editor gives the opening far better pacing than the original MoS. He removed the most, er condomy, shots from the capture-of-the-bad-guys scene and deleted Jor-El's silly action-hero moments. However, the big error here is that everything from the death of Jor-El to the explosion of Krypton can be cut -- that's about 10 more minutes fat. Everything in that 10 mins -- about how Zod and his minions survived -- is explained by Zod himself later in the film. As such, it's repetitive and makes the opening, treated as a teaser, a bit weaker than it could've been.

Back to the original MoS: Filmmaking 101: Flashbacks should directly reflect what is happening on screen in the NOW. In MoS, none of the flashbacks connect to present day, and while I've not seen the MoS script, I would bet this problem came out of editing. The Fan Editor has resolved this issue with great skill and aplomb by peppering flashbacks throughout the film and *always* making certain they clearly connect to what's happening "today."

In the original MoS, numerous scenes simply made no sense, this includes the death of Jon Kent (which, again, likely made sense on paper, but due to Snyder's blocking, makes it clear that Clark could've saved dad and the dog before those final moments when Clark would've revealed himself to a town that ended up knowing about his powers anyway). Here, the death of Pa Kent, it is implied, just happened w/the passage of time. A brilliant solution.

That natural death of Pa Kent actually makes more sense since his choosing to die by tornado added nothing to the growth of Clark or to the plot in the original.

However, cutting has its downside. In the original, Lois is attacked when she boards a Kryptonian ship stuck deep in some ice. This same defense mechanism is seen later by the terraforming machine fighting Superman. With the former defense scene cut, the latter one comes out of nowhere during the climax.

Similarly, the original movie has several scenes highlighting Clark's lack of a moral compass, all of those scenes -- save for Pa Kent's advice to "maybe" let some kids die in order for young Clark to keep his secret -- set up Clark's decision to kill Zod. With all of those scenes gone, it no longer makes sense to have Superman kill Zod. This was a sore point for classic Superman fans (of which I am one), yet I felt the original MoS set this up clearly (albeit clumsily). This edit does not set it up at all, and Clark's regret for having committed murder just doesn't sell it.

Fact is, the editor changed the coloring, making it less somber, changed the score, making it more upbeat and exhilarating, and changed the film's entire tone. To then keep the grisly murder of Zod just didn't make sense.

On this same point, while the fan editor removed a great deal of the wanton destruction (e.g., it's one thing for Zod to throw Superman into a building, but when the hero is doing it, it's clearly just a gratuitous choice by the filmmakers), he could -- and should -- have removed far more of it to fit the new tone and style he created in the first hour.

The editor's removal of the destruction of Metropolis thus mitigated the movie's ultra-violent tone. As such, much of the climax no longer works -- yet he kept it in tact. I would recommend the fan editor do 1 of 2 things here: 1. Either end the film with the evil Kryptonians being sent back to the Phantom Zone, thus implying that Zod went with them. Or 2. Re-edit it so that the fight with Zod occurs WHILE the payload that opens the PZ is being distributed. That way, with some clever editing -- and perhaps 1 or 2 new effects -- one of Superman's punches can depict Zod being punched into the PZ entrance when said payload does its job.

Re: the Score: Zimmer's score was virtually the only good thing about MoS, although his score most assuredly lacked a crescendo -- an absolute necessity in a superhero film (Elfman's Spider-Man theme had the same issue). The new opening credits sequence, with the John Williams score, is quite wonderful, and the big Superman scenes throughout the film pack a much bigger punch with Williams' score. The problem in using the old Superman score is that on Krypton and throughout the film, we get the same cues over and over again. The editor did his best to switch it up, but there just wasn't enough to draw from. It does get frustrating, but one cannot deny that it most definitely gives the film a more exciting tone and feel (along with the color correcting and improved pacing). I'd suggest he dig through the John Williams library and see if he can find some cues from his other film scores which have a similar tone and style to his Superman work (much like the villain marches is S:TM and Star Wars are similar, I'm sure there are other lesser-known Williams scores that also bear a resemblance to his Superman style). It would be much better than re-using a cue for the 5th or 6th time.

Overall, this was a very well-done edit. It absolutely improved upon the original, clearing up story, plot, and character problems. The new look works nicely, and it now looks like a film made by pros, rather than a big-budget film made by film students. The editing is definitely leaps and bounds above the jerky original.

I hope to see a version 2.0 of this cut to fix the problems mentioned above. But I highly recommend checking this out if you did not enjoy the original.

Format Watched?
MP4/AVI/etc. (SD)
Was this review helpful to you?