Man of Steel: A Symbol of Hope

Brief Synopsis:
'Man of Steel: A Symbol of Hope' does not try to radically reshape MOS because I liked most of it already. I just wanted to tweak the character of Superman to make him feel more heroic. So if you hated everything about the original MOS, then this isn't the FanFix for you. There are several 10-minute chunks of this edit that are unchanged (aside from the regrade) but when I did change something, I hope it feels significant.


Intention:
MOS-ASOH sticks closer to the positive character of Superman we know from the comics and from the older movies. Hans Zimmer created a fantastic "hero theme" for Henry Cavill's Superman (sometimes called 'What are you going to do when you are not saving the world?') but sadly it was not really used in the original cut of MOS. Here it is deployed appropriately for Superman's heroic or emotional moments, in the same way that John William's theme was used for Christopher Reeve. This is the most obvious change in MOS-ASOH, requiring a lot of soundFX replacement work.

Excessive levels of chaos and destruction during the boringly overlong action sequences are trimmed (where possible), especially if it was Superman causing it. Superman/Clark committing acts of violent retribution, or being indifferent to the plight of those around him are excised (where possible). Clark does not now make a deliberate choice to let Pa Kent die, he just hesitates when maybe he should have acted. Some of the swearing is removed to make this film more family friendly. A complete re-grade has been done shot-by-shot to remove the green/brown tint, increase saturation/contrast and to make Superman's suit more colourful. Some scenes are re-ordered to improve pacing, or refocus dramatic moments. Some onscreen titles are added.


Additional Notes:
As of 5th December 2017, a new alternate audio mix called the 'Hopeful Mix' has been added to all versions. This was to tone down the use of the main "Hero" theme, from 5 scenes, to 3. The old/original mix will now be referred to as the "Extra Heroic Mix".
Other Sources:
- Man Of Steel (Blu-Ray)
- Man Of Steel (CD Soundtrack)
- Turkish Airlines: Metropolis (Commercial)
- freesound.org

(* Only in the "Extra Heroic Mix" but a small section of the Piano Hero theme has been mixed into the kiss scene at 01.52.51 in the "Hopeful Mix")
Blu-Ray Cover art by TM2YC (DOWNLOAD HERE) 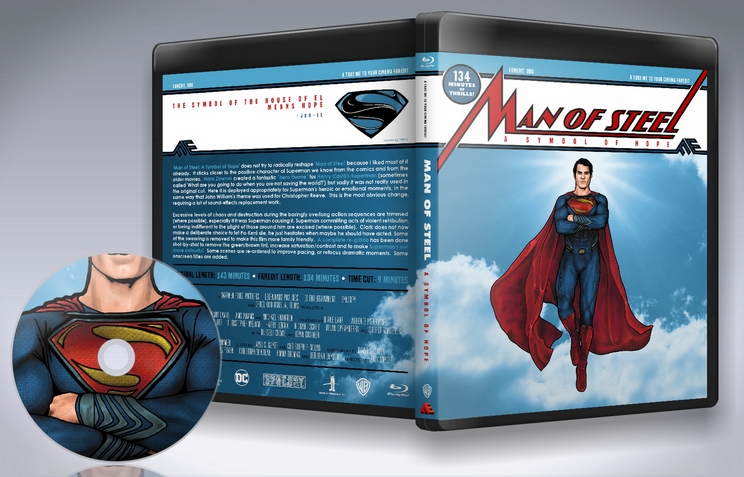 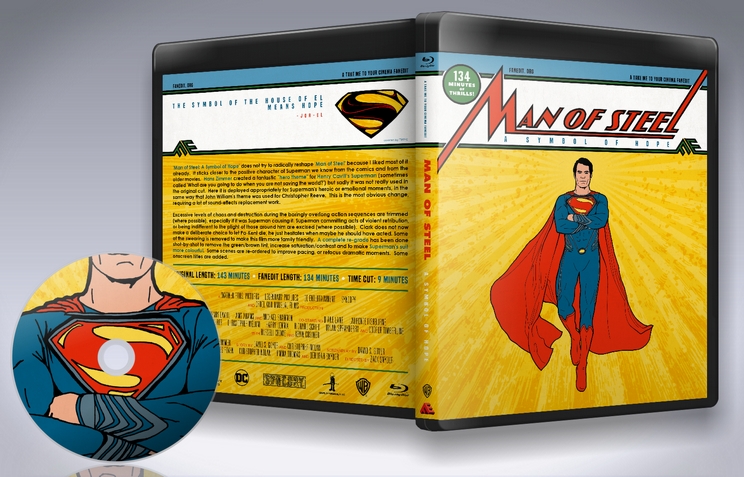 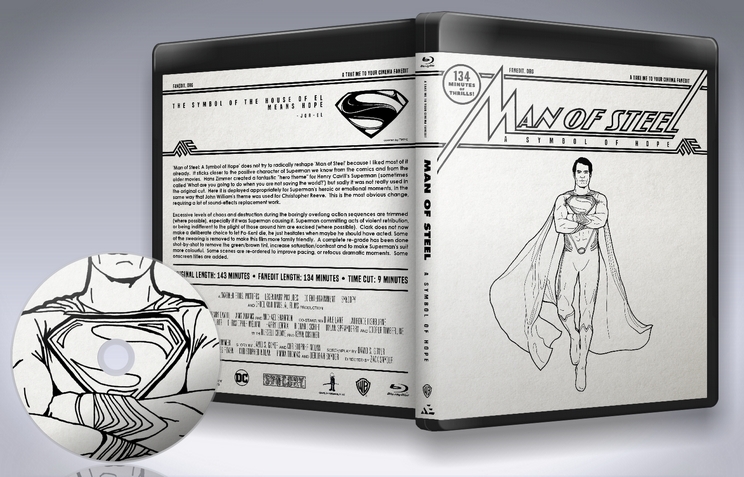 Do you recommend this edit?
Yes
Format Watched?
Digital
T
thomsthinema Top 500 Reviewer 19 reviews
Report this review Comments (0) | Was this review helpful? 0 0
October 17, 2021
Overall rating
10.0
Audio/Video Quality
10.0
Visual Editing
10.0
Audio Editing
10.0
Narrative
10.0
Enjoyment
10.0
I can say i completely forgot the original cut after this one. Some things can't be fixed only by editing but this is truly shows with aome effort you can make things better. Highly recommended!

Do you recommend this edit?
Yes
Format Watched?
Digital
D
deoutrora Top 500 Reviewer 8 reviews
Report this review Comments (0) | Was this review helpful? 0 0
June 07, 2021 (Updated: June 07, 2021)
Overall rating
9.0
Audio/Video Quality
10.0
Visual Editing
9.0
Audio Editing
10.0
Narrative
8.0
Enjoyment
9.0
So my friend is a Comic book film fan, like everything comic books (i.e. he's spent a lot of time invested in understanding the nuances and easter eggs of all comic book films through youtube shows and podcasts and the like), and has somehow convinced me to rewatch the Snyderverse before four hours of Justice League.

We start with Man of Steel, but instead I've convinced him to watch the fanedit.

So let's talk about the fanedit A Symbol of Hope.

It's essentially the same film, minor edits (~10 minutes in total) in particular to the overlong action sequences to speed them along and show less wanton destruction caused by Supes himself. The two other big changes that are most appreciated are that it recolors most of the movie so that it pops brightly and colorfully and rescores it so that the awesome Han Zimmer Man of Steel hero theme (from the trailer) plays more frequently during key moments. (There are two audio tracks, we went with the Hopeful Mix instead of the Extra Heroic Mix, due to reviews here.). We both universally loved the recoloring and rescoring. With The Hopeful mix we found it the right mix without over-usage complaints that were rallied at the Extra Heroic Mix. This is truly a Superman theme.

Narrative:
The most noticeable cuts regarding plot are three fold, first regarding Papa Kent's answer "Maybe," to the question, "should I have let them die (the kids in the bus)," second the Superman scream after he kills the last of his kind, and finally, the biggest one, the Papa Kent death scene is truncated to make it seem like Clark hesitated in saving him rather than being explicitly told by his father to let him die. All three of these stood as controversial with the death scene standing out as the most controversial for my buddy.

The first one, the "maybe" scene, my friend argued that it takes away from Papa Kent's philosophy about protecting his son from revealing himself, I still think the line makes Papa Kent an asshole and I appreciated it's removal and found that enough of the uncertainty and concern still came out in the scene.

Nothing much to say on the Superman scream after Zod's death really.

I think given my buddy's investment in understanding Zack Snyder's intent he's more attached to the original scenes than I am, particularly the Papa Kent death scene, claiming that it completes Papa Kent's arc and is integral to the one son, two fathers (with two ideals) theming of the film. I just shrug but I see his point. Papa Kent believed in his philosophy so strongly that Clark should hide who he is, that he was willing to sacrifice himself for it. The dog is still a stupid freaking plot device to get there though.

The film as a whole wasn't changed much, it wasn't a world beater then, and this edit still isn't a world beater. As a film it's important to remember that this film wasn't so much a Superman film but an alien invasion film starring Kal-El. As a result Zack Snyder spends most of the film with hefty philosophical questions about what it means to be a a super powerful alien on Earth, what it means for society to find out that they're not alone in the universe, and how people will react to that. These portions are slow, yet meditative in a way and mostly really work. Even though I enjoyed them for what they were, they're not quite as hard hitting as similar toned and paced understated character study of Signs. Nonetheless, years later, I continue to find Zod's global message on the tv quite unsettling and a fantastic piece of suspense, scale, and scope.

Much of the third act is quite tone deaf to the rest of the film and this edit goes a long way to fix this. Both my buddy and really loved the tightening up of the overlong action scene. In the original, the rest of the film gives way to bombastic action and destruction which is thankfully reined in for this edit, in an attempt to give more oomph to Superman as savior, a hero attempting to save the people of his new home. After it devolves into clear good/evil delineations and fist fights, it's really sad that any of the promise of the film as a first contact film is lost. The third act echoes the tragedy of 9/11 and yet it's heroic as Clark and Lois share a kiss among the destruction.
Sure this Superman is conflicted as a hero because he doesn't have all his ideals in place, he makes it clear he doesn't want to fight any of the Kryptonians but he will to save his home. Which makes sense, as Zack Snyder's DCEU is a multi-film saga of the origin of Superman, and how he became to be the Superman we know and idealize. It's littered with stutter steps, but that's what the whole vision is.

I think there's still some enjoyment in this film, rescored and recoloring helps, and some neat trims to action. The plot changes, particularly the Papa Kent death scene changes the theme drastically beyond that all of the edits I see are positive.

I think there's some clear influence from Nolan here, particularly in the theming of superheros in the real world ala the Dark Knight trilogy, and the whole DCEU may have done better if Nolan had retained this influence.

Nonetheless, with Man of Steel, the inherently darker, washed out color palette is all gone and it's better for the brighter colors even if it doesn't fit the more somber tone of the film. I enjoyed my time revisiting Man of Steel in this fanedit.

Do you recommend this edit?
Yes
Format Watched?
Digital
E
elnino14 Top 500 Reviewer 15 reviews
Report this review Comments (0) | Was this review helpful? 0 0
May 21, 2021
Overall rating
9.8
Audio/Video Quality
9.0
Visual Editing
9.0
Audio Editing
10.0
Narrative
10.0
Enjoyment
10.0
TM2YC has managed to remove everything I disliked about MOS theatrical and still keep everything in there that I DID like. The new color grade is a tad oversaturated in a few instances, but still looks pretty nice. I really like the music changes as well. Great job!

Format Watched?
Digital
B
beastie17 Top 1000 Reviewer 2 reviews
Report this review Comments (0) | Was this review helpful? 0 0
March 24, 2021
Overall rating
9.1
Audio/Video Quality
10.0
Visual Editing
8.0
Audio Editing
10.0
Narrative
9.0
Enjoyment
9.0
The audio and video edits are seamless and very well-done. It removes the bad parts, like Clark's dad saying "maybe" he should have let the kids die, and the truck being destroyed. It's overall an almost perfect edit for me. I just wish the fight scenes weren't cut, especially the part where Faora-Ul quickly takes out a handful of soldiers with quick dashes. It was one of my favorite parts of the movie.

I think I am in the minority when it comes to Man of Steel in this aspect, though, because I don't have a problem with the destruction or fight scenes at all. It's actually my favorite part about the movie.

The regrading of the movie was great and the colors look a lot better than the official release. The scene in Krypton where General Zod and others are launched in the phallic shaped pods has a light flare overlay, and I didn't like the way that looked.

I would highly recommend this fan-edit to anyone who already enjoys Man of Steel, but might have a few gripes with it. This edit handles most of those.