Brief Synopsis:
A brand new cut in the style of the original movie, “The Lost Boys”, at least that is what I have been aiming for.
Intention:
I wanted to create a movie with the same atmosphere as in the first Lost Boys, where the vampire gang was a fun group who “seduced” the main guy to become one of them. I also wanted the movie to be set somewhere in the 90′s to better follow the original movie.
There were also vampires killing and hurting each other, which didnÂ�t sit right with me, so I wanted that gone too.
And all the swearing is just not needed!
Release Information:
DVD
Editing Details:
I removed all scenes where there are references to modern day, like talk/use of Internet, and the vampires playing modern videogames. I also removed all the parts where vampires kill or hurt each other! And of course all parts where the vampires are behaving or talking badly/swearing to the main character/characters!
It should be fun to join the Tribe!
Cuts and Additions:
Cut list:

CUT/EDITED Opening sequence, removed the first part with all the swearing and vampires killing vampires. The beginning is now more like the original movie.
ADDED New title song from the Tribe Bonus disc – Original singer G Tom MacÂ�s disco version of the original theme of “The Lost Boys”.
ADDED Custom Title cards – Lost Boys The Tribe Revamped.
CUT most of aunt Jillian, she now only welcomes Chris & Nicole and then she is not seen anywhere else in the movie.
CUT all scenes where the vampires are acting like bullies and/or swear for no reason. They are supposed to “seduce” you into their Tribe.
CUT everything that put the movie in modern day, so no Internet, videocamera or videogames, wanted the movie to feel like it is set in the 90Â�s.
CUT scenes where the vampires are hurting each other with swords!
CUT around shower scene and other topless scenes, there is no real nudity here since it wasnÂ�t needed in the first movie.
CUT Nicole saying “I tried to eat that guy…and I am a vegetarian”.
CUT/TRIMMED the beach scene at night after the surfing. Trimmed the conversation and removed the parts where some of the vampires make fun of their victims, now they feed because they need to.
Also minimized the gore here, some is needed but not all of it!
CUT Edgar Frog saying he became a minister online, since all other mentions of Internet has been removed . He now gets the question “YouÂ�re a minister?” and just answers “Yep!”.
Also cut him later saying “ItÂ�s vampire b.o.” and “Pop goes the weasel”.
CUT/TRIMMED dialogue between Chris and Shane during their fight scene.
CUT the scene following Chris and Nicole being dropped of at home by Edgar. The movie now ends with Edgars truck driving off and Evan happily screaming “Woohooo!”
ADDED new end title song – Cry Little Sister by Seasons After.
Cover art by Raven (DOWNLOAD HERE) 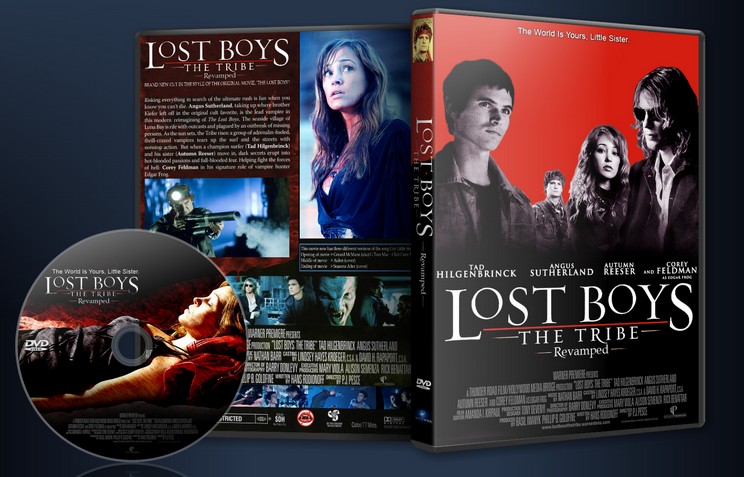