Lord of the Rings: The Battle for Middle-Earth

Brief Synopsis:
The Battle for Middle Earth is basically The Two Towers and Return of the King but told from Aragorn and Company's point of view. We will not see anything about Frodo and Sam's Quest, and doing so, we can focus etirely in a single adventure. This Project was split into two parts of 3 hours and 2 hours and a half each one to avoid making them too long. The Extended Editions were used as base.
Intention:
This project came out as a response of my Lord of the Rings fan edit, the Journey to Mordor, where we see the adventure told from the point of view of Frodo and Sam. By providing The Battle for Middle-Earth, I'm giving you an alternative way to watch The Lord of the Rings story, beginning with The Fellowship of the Ring, followed by The Battle for Middle-Earth Parts 1 and 2 and finally the Journey to Mordor.

Esentially, these fan edits are THE SAME MOVIES and very few modifications or cuts were made to make the story flow. These fan edits were made by a fan of The Lord of the Rings movies, for fans of the Lord of the Rings movies, who appreciate every single momment of the films and do not believe anything should be cut. Do not expect cuts and differences to make the film as close as possible to the book as many have done here, because that is not my intention. As I said, It's an Alternative way to watch the Story, and even I still prefer the extended editions as they are, but I have hopes these fan edits will make your experience a little bit different.
Other Sources:
Part of the Soundtrack was used to fill some bits of music between transitions.
Special Thanks:
Masirimso17 for making that wonderful cover
Release Information:
Digital
Editing Details:
Sony Vegas 11 was used for this Fan Edit.
Cuts and Additions:
This edit will let the audience experience the Lord of the Rings Trilogy in an alternative way, so Battle of Middle Earth changes are as subtle as possible because I wanted to show you a respectful alternative way to see the Story Mr. Jackson directed. Some seconds and segments of some scenes were cut to make it look with the best flow possible. Some scenes were rearranged for the same reason but in the end, it is the same movie. This Fan Edit might interest more people who loved every single bit of Lord of the Rings Trilogy, even the Extended Edition as I did. If you have never watched Extended Editions, this is your opportunity. These are the changes:

-After Eomer is expelled from Rohan, we go to Merry and Pippin being carried by the Uruk-hai and Aragorn and Company following the Uruk-Hai.

-Galadriel's Speech about the status of Middle Earth was cut because it was used in my Journey to Mordor Fan Edit. Instead, we just hear Galadriel telling Elrond encouraging him to fight for Middle Earth.

-Rearranged scene: Merry and Pippin and scene where they decide to go the opposite direction of where Treebeard wanted to take them is shown after they are said to return to the Shire. The Scene where Treebeard discovers all the trees destroyed was placed where the other scene above was before. I had to do this because It felt kind of Awkward the transition of the scenes. Remember Frodo and Sam scenes were taken out so that is the reason why it looks like it lacks something. Rearranging the scenes like this, the problem was solved.

-Rearranged scene: Merry and Pippin getting high was placed after Gandalf scene where he foreshadows the beginning of the Battle for Middle Earth.

-Added scenes from Return of the King: Aragorn and Company arrive Isengard shortly after this, and they talk to Saruman, imprisoned in the Tower.

-Battle for Middle Earth Part 1 closes with Aragorn asking Gandalf if he belives Frodo is alive, to what Gandalf answers yes.

-My name in the "Edited by" section of the Credits.

The Battle for Middle Earth Part 2 (Return of the King):

-The film opens with the New Line Cinema Logo and usual presentation. Then fade to black. Snoring is heard (it's Gimli), then we see Aragorn getting up in the middle of the night.

-Aragorn and Company going to the Black Gate was edited altogether. I used the shot of Sauron's eye from Journey to Mordor to stablish continuity. Same reason as above.

-The film ends with an exciting cliffhanger.

-My name in the "Edited by" section of the Credits.

-A message is displayed at the end of the credits to tease Journey to Mordor Fan Edit. 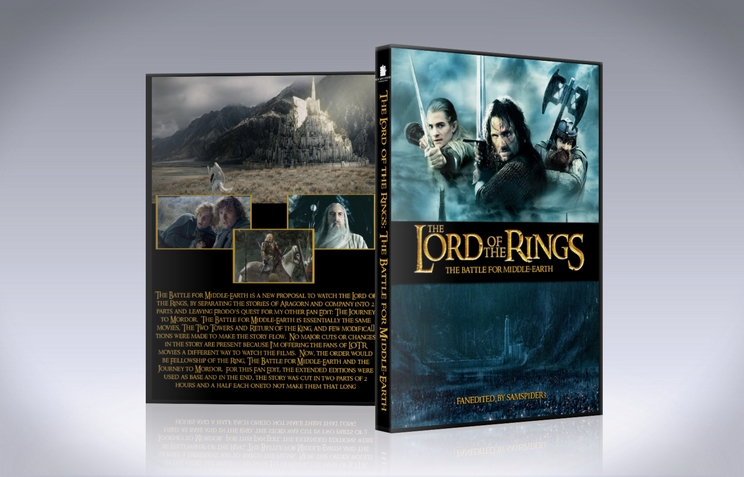