i had been contemplating whether to post this edit or not for a while, but decided to post it any way. the deleted scenes aren’t the same quality as the original movie, (people might moan about them, in the quality they are in) but i wanted to add them anyway, as i think the film deserves to have it’s original story told.
Cuts and Additions:
Scene 1 – something in her eye
- in this scene humbert is working at his desk when lolita interrupts him with something in her eye,and humbert has a interesting way to help her

Scene 2 – sofa
- after lolitas mum leaves humbert in charge of lolita while she goes out,they share a playful moment on the sofa

Scene 3 – hour glass lake
- in the original film we see humbert and his wife arrive at the lake but we don’t see them swimming,this scene shows humbert imaging drowning his wife in the lake while he is swimming with her

Scene 4 – the enchanted hunter
- after humbert picks lolita up from summer camp after her mother has died,they stay at a hotel for the night,this scene extends the original scene in the film after lolita has gone to bed and humbert wonders downstairs

Scene 6 – wace post office
- this scene shows humbert and lolita pull into the town of wace,they talk about it earlier in the film but for some reason its never shown in the original film,this scene shows what happens when humbert thinks he has lost lolita in wace

There are 2 more deleted scenes on the dvd, but i decided not to use them because they didn’t really fit into the film.
Cover art by Dluppers (DOWNLOAD HERE) 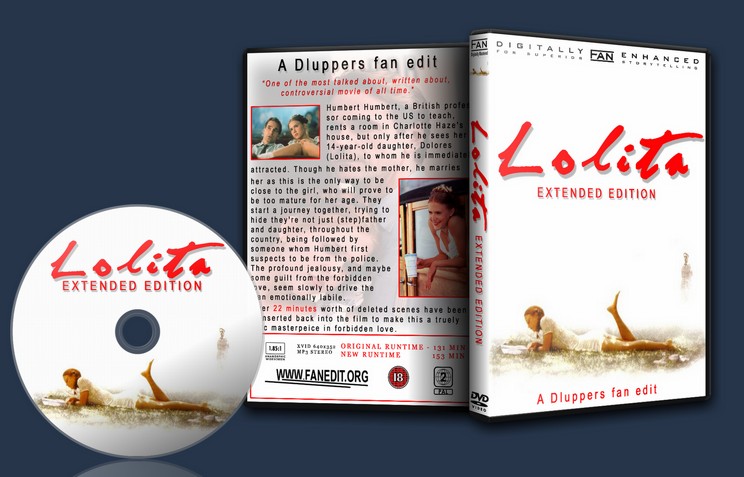