Brief Synopsis:
This edition adds nearly all the footage from the director's cut, plus additional deleted scenes, including the originally intended ending, and Riggs' bar room fight
Intention:
There has only been two versions of lethal weapon: the original cinema version and the directors cut on dvd. With the blu ray release came more deleted scenes, some which were usable, and some which weren't. So I thought why not make a longer extended cut? And I did. So here it is.
Additional Notes:
I'm also in the process of uploading a version with the cinema ending, so you have a choice of versions. The rest of the additions are the same. A dvd is also in the works, with a music video I threw together as the special feature
Other Sources:
Lethal weapon soundtrack
Pure Lethal documentary
Duran Duran - Rio
Special Thanks:
OpNMC & jswert123456 for viewing the finished version and providing feedback - ssj, neglify and tv's frink for the gags on the in the works thread
Release Information:
Digital
Cuts and Additions:
Added:
most of the scenes from the directors cut
-(deleted scene): Riggs bar fight
-(deleted scene): Additional scenes at Murtaugh's family home including Rianne's new boots, Introducing Riggs to Nick, Roger's forehead kiss to Rianne (and thinks it's Riggs)
-additional footage of the jumper scene, including Riggs showing his wife's photo to the jumper
-Roger consoling Trish after Rianne's kidnapping
-Carrie asking Riggs to bring back Rianne
-original ending
Cover art by JetSetWilly (DOWNLOAD HERE) 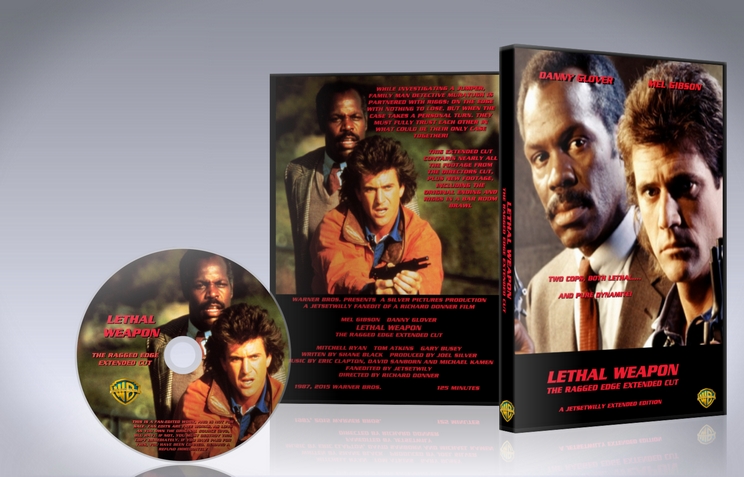 Do you recommend this edit?
Yes
Format Watched?
Digital
D
dirtycop1036 Top 50 Reviewer 64 reviews
Report this review Comments (0) | Was this review helpful? 0 0
December 24, 2019
Overall rating
8.9
Audio/Video Quality
8.0
Visual Editing
9.0
Audio Editing
9.0
Narrative
9.0
Enjoyment
9.0
So I got ahold of this to watch this year around Christmas (as I do every few years) and it was my first time seeing a lot of the extra footage. It's very interesting for perspective on the film, which I consider one of the all time classic action movies. The visual quality of the re-inserted scenes varies tremendously, as does the audio in those scenes, so really you're not watching this for immersion. If you watch this cut, it would be for the extra story bits, so the question is: how well do they work in the film?

Well, there is an issue of placement, as neglify's review here already mentioned. But aside from that, there's the issue of what these scenes ADD to the movie. Most of them work really well on their own...they're good scenes! But added back into the film, few of them serve any purpose. For example, there's a scene where Riggs lets an active shooter at a school take shots at him so that he can snipe him with his pistol. It's supposed to show that Riggs is A.- not especially concerned with living, and B.- an amazing marksman.
But we already learn A in several other scenes in the film, and B in the conversation with Murtagh after dinner, and again on the shooting range. You can't get rid of these other scenes, so you're just repeating the same point again and again if that scene is included.

Another example is the scenes with Riggs and Murtagh waiting for the kidnappers to call back. We see that Riggs really cares for this family, and Murtagh thinks ahead to give his wife his backup piece. There are nice details in these scenes. But neither of these conversations is ever followed up on, and we've already gotten these relationship dynamics from previous scenes. It's needless repetition.

If you haven't seen this material before, I'd definitely recommend watching it, as it's quite good. However, its inclusion in the film just made me realize what a lean, effective cut of the movie we had in the first place. We don't need an extra 20 minutes of establishing characters at the start, there's already plenty. And the visual quality difference might be really distracting for some, as it was for me. I'd actually like to just take out a few cheesy one-liners from this film, and re-insert just a couple of the deleted bits, if the quality could be cleaned up. Then it would be a perfect film. But if you simply want to see all the stuff that's available, this is an enjoyable Christmas watch. :)

Do you recommend this edit?
No
Format Watched?
Digital
M
mnkykungfu Top 50 Reviewer 126 reviews
Report this review Comments (1) | Was this review helpful? 0 0
January 29, 2016
Overall rating
8.3
Audio/Video Quality
9.0
Visual Editing
9.0
Audio Editing
9.0
Narrative
8.0
Enjoyment
8.0
Lethal Weapon is one of my favorite movies and I've watched it countless times. I was disappointed that the Blu-ray only contained the Theatrical Cut as I love the additions to the Director's Cut (which technically isn't a real Director's Cut as that was just a label Warner Bros. added to the DVD). So I was happy to hear that an Extended Edition was being made to add back in all the DC footage, along with the extra deleted scenes on the BD.

A/V Quality – 9
This is DVD quality but seems to be sourced from the Blu-ray. I wish it were edited in HD (I know, that's a funny statement coming from me, as I've railed against HD-bias in the forums) but I understand why it's 480p. Some of the deleted scenes look clean (the ones used in the DC) and some look a bit scratchy, and the Bar Fight deleted scene and the alternate ending look really bad, as they are only available on the Lethal Weapon 4 DVD and weren't included in the BD set. The quality itself is fine with some noticeable drops during some deleted scenes.

Editing – 9
Solid editing throughout, with only a couple minor blips when transitioning to deleted scenes. Nothing too distracting but it wasn't perfect.

Narrative – 8
Some of the added scenes were put back in incorrectly, or at least incorrectly from my point of view. The Bar Fight scene was originally supposed to be the introduction to Riggs, therefore it should have been placed as the second scene, after the opening balcony death and before we meet Murtaugh. As it's placed now it creates a bit of a continuity error as we see Riggs wearing a specific shirt in a couple scenes, then a different shirt when he's at the bar, then back to his original shirt when he comes home in the next scene.

Then, the scene with Riggs taking on the school sniper is put in the wrong place. In the “Director's Cut” it comes right after the short extra scene of Murtaugh at the shooting range and before we see Murtaugh arriving at the scene of the crime. In this edit it comes after we see Riggs' encounter with the drug dealers and after Murtaugh arrives at the crime scene. In theory the two Riggs scenes are interchangeable and the sniper scene can come after the drug bust. BUT, at the end of the drug bust scene we see that Riggs is heavily shaken up and in the sniper scene he's cool and shows no emotions whatsoever. It is more logical for the character to be so shaken up after the second time risking his life that afternoon.

All the other deleted scenes were placed nicely.

Enjoyment – 8
Despite my criticisms about the placement of some scenes, I still enjoyed this. I mean after all, it's Lethal Frickin' Weapon. But I would like to see an improved V2 that fixes the placement of those opening scenes. As for now, I'll stick with the “Director's Cut” DVD as my preferred version.

Thanks for the review. To address some of the points:

the bar room fight: it was placed there as I couldn't get the scene to work where it originally was. Also, it does kind of call on a sense of suspending belief about the shirt. He could have bought it before going to the bar, got blood on it from the fight, then changed back into it when he got back into his truck

The school sniper scene: again, I tried to put this scene as it was in the directors cut, but it put too much time on just Riggs. I wanted the time to equal between the characters, eg: scene with martin,m scene with roger, martin, roger, etc. Also, it could be surmised that between the scenes, Riggs composed himself before driving off, and he gets the sniper call ten minutes after, but thats just what I think

Other than that though, I'm glad you liked it

The editor really knows his trade and manages to integrate the additional 21 minutes making for a richer and more enjoyable film.

A must-see for the fans of the series and classic action flicks alike.

Do you recommend this edit?
Yes
Format Watched?
Digital
J
jax20 Top 100 Reviewer 38 reviews
Report this review Comments (1) | Was this review helpful? 0 0
January 25, 2016
Overall rating
9.9
Audio/Video Quality
10.0
Visual Editing
9.0
Audio Editing
10.0
Narrative
10.0
Enjoyment
10.0
This was a really cool edit. It inserts a lot of deleted footage, including an alternate ending. The footage is not completely seamless but it's not anything to distract too much. It's such a cool movie and I like the idea behind putting the new scenes in and moving some parts around. Great job all around!!!