Brief Synopsis:
This is the incredible attempt to turn HANNIBAL RISING into a good movie. Instead of a superficial, boring, lame serial killer hero tale, this is a much more subtle and greatly pacing improved version, which has only so little in common with the original release. Hannibal rises. Finally worth to be watched.
Intention:
HANNIBAL RISING was a huge disappointment as a book and even more so as a movie. Huge Pacing problems, over the top cruelty and some really bad ideas made the movie an unworthy prequel to the successful franchise. Still the movie was not just cheaply produced as a B-movie. 50.000.000US$ were spent to make it as good as possible and still it failed on almost every level it so hard tried to achieve. The result was a movie that from the start was uninteresting, lame, disgusting and simply bothering its audience, who had difficulty finding any access to the story. This also lead to many thinking that the leading actor Gaspard Ulliel was a bad choice for young Hannibal, but I have to disagree here. He spent months studying the movie Hannibal Lecter, trying to copy his way to speak, to move, to look – and successfully. Unfortunately his presentation was not able to save the movie as such, but it was this what gave me the idea that something could be done to this movie to create a version more likely to enjoy an audience, maybe even something thrilling. Taking a closer look I realized that lots of scenes were filmed really well, show a lot of talent and power, meanwhile others take all that away by being just bad. The first time I watched HANNIBAL RISING I simply hated it, maybe because I am such a fan of the franchise and had to deal with the disappointment of it going downhill with each new movie. That was not my all time favorite villain Hannibal Lecter. That was a demystifaction of the worst kind. It became a superficial horror thriller.
Now I cannot answer, why on earth I watched this movie again, but maybe the answer is again that I am a huge fan of anything concerning Hannibal Lecter. And this time I realized the potential of a good movie inside this turd. Gaspard Ulliel’s acting was the main reason for that, because he does give one really good performance. So I started thinking, creating a concept and finally fanediting. And with pride I can finally announce: I present you a worthy origin of Hannibal Lecter.
Release Information:
DVD
Special Features
Full commentary from faneditors Boon23 and Heinrich. Plus vignettes "The Lotion", "The Japanese Shit", "Grutas in World War II", "Das Maennlein" and info on 23 CBB fanedits and future perspective.
Cuts and Additions:
None of the sequels to SILENCE OF THE LAMBS showed us the same interesting Hannibal Lecter that we knew from there. Instead Thomas Harris continually took away from him by inventing new ideas about why Hannibal does what he does and how he became the fictional person he is. I really hated the “route to killing the rude”, which was introduced in HANNIBAL, so my fanedit of this movie took away most of all that.

Now is the story of Hannibal Rising interesting? In a way, yes. The explanation why and how he became the one he is, is interesting, yet painful to watch, because only incredible suffering could turn you into a psychopath like he is.
My fanedit takes out the antagonist part big time, so the focus of the movie stays on Hannibal and not so much on hating Grutas and his men and wishing them bad. This affects the entire mood of the movie, which is sinister, silent and rather unhappy. This is a huge change compared to both book and movie. Also there is no big police chase involved, which even more puts the focus on Hannibal and his deeds.

What made the second part (where Hannibal escapes) of Silence Of The Lambs so fascinating is to watch this man doing terrible things with calmness, yet smartness. It is the strange fascination of terror, not action.

The Hannibal I present you in my fanedit is not one to be loved, but he is an interesting person and we see the huge potential he got for getting extremely smart.

There is banality and triviality in his motives to kill these men. Revenge is so obvious. But yet this was necessary. Only if he was personally involved in his first murders, he could later on discover that the lambs did not stop screaming after the task he put on himself was complete.

My fanedit NEVER makes his killings appear as a good thing to sympathize with. But the calmness with which he takes revenge is for sure fascinating.

My fanedit tries to completely change the mood of the movie from a superficial psychopath hero tale to a more subtle revenge movie of a deeply traumatized, yet very intelligent person, who tries to solve the reason for his nightmares and his continually feeling bad (the screaming of the lambs). 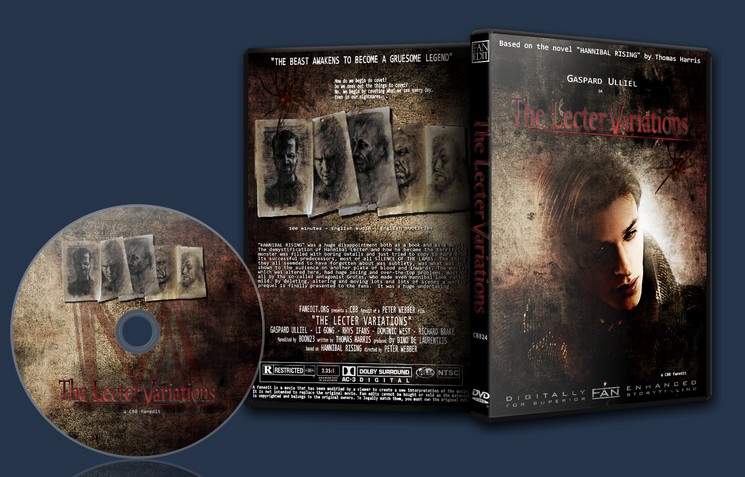 Audio/Video Quality: I could not watch the DVD version of this edit but the quality of the video was good. Neither better nor worse than the original one taking into account that the original is in a DVD version. For that reason, I consider a six to be a good rating, because nothing was improved involving this.

Visual Editing: This part was well done. The only scene where I could really notice that something was changed was when he starts to remember, but in the rest of the movie is difficult to know what was cut. Maybe with some effects added this sensation could be dismished a little but I am not very sure about that.

Audio Editing: I do not usually notice audio cuts unless they are very obvious. Here I did not detect anything strange. I think it was well done. A bad Audio editing could have ruined this movie even more. With some effort and knowing what was changed you can be able to notice something that is not perfect.

Narrative: This is what makes this edit important. The narrative is completely changed, which manages to transform a horrible movie into a watchable film more in the way of the silence of the lambs and its other sequels. This does not means that it is as good as the rest as the saga but the final thoughts are positive.

Enjoyment: The movie now can entertain us thanks to the fact that some misteries are not resolved right away in the first minutes. Not knowing what happened to Hannibal untill half the movie was a good change that I enjoyed a lot. Another good thing was the incest kiss, wich was not surprising, disappeared.

*This rating was given before reviews were required*
B
brauventura Top 50 Reviewer 87 reviews
Report this review Comments (0) | Was this review helpful? 0 0
View all user reviews