Lean on Pete: Featuring the Music of Richmond Fontaine

Brief Synopsis:
The author of Lean on Pete, Willy Vlautin is not only an incredible writer, he is also the front man and guitarist of one of the finest Americana bands of the last twenty years. It is almost a crime that his music in the film adaptations of Willy's novels is often relegated to the end credits. Although some of the original score by James Edward Barker remains i wanted to highlight Richmond Fontaine's music and bring it to the forefront.
Intention:
My intention is not to change the narrative because the film is a pretty faithful adaptation of the novel, however, i wasn't enamoured with the final scene, it just didn't feel right to me. The original theatrical ending promotes hopefulness but I wanted my edit to end with a sense of relief and at the same time have the viewer succumb to emotional exhaustion mirroring our protagonist as he does in the book. There are three major moments in the original film that i feel needed to be more emotive and they just fell flat - i have added musical cues to heighten the viewers emotional response to the scenes. In the novel Charley had daydreams and nightmares and i wanted to see if i could incorporate one of his dreams into the film - so i gave it a go
Other Sources:
- Lean on Pete Bluray
- Lean on Pete Novel
- Lean on Pete Audio Book
- Richmond Fontaine albums & EP's - The High Country, Clearcuts, Thirteen Cities, Winnemucca, Live at the Doug Fir Lounge, Whiskey Painkillers & Speed, Post to Wire, We used to think the Freeway Sounded Like a River, $87 and a Guilty Conscience that gets Worse the Longer I Go On, Miles From.
Special Thanks:
Road Movies, Willy Vlautin and his band Richmond Fontaine for the inspiration and also the incredible performance of young Charlie Plummer. in this movie - that boy has some acting chops. I never got bored of watching his fragile but determined work even after watching a scene many times.
Release Information:
Editing Details:
I watched the original movie at the cinema and then waited patiently for the bluray release all the while re-listening to twenty years worth of Richmond Fontaine's albums. I gradually siphoned out the tracks i knew would not fit the tone of the movie and once i had a good list of around thirty tracks i started the editing process. I then managed to whittle the tracks down to about seventeen songs including songs for the end credits.
Cuts and Additions:
- Added seventeen Richmond Fontaine tracks.
- Cut a small scene of Charley eating his dinner purely because music was playing on the TV during the scene and it kept bleeding into the song i added.
- Cut final scene of Charley running in the suburbs
- Added a dream sequence.
- Added some additional credits featuring the track and album details of the Richmond Fontaine songs incorporated in the movie.
Cover art by Last Impressions (DOWNLOAD HERE) 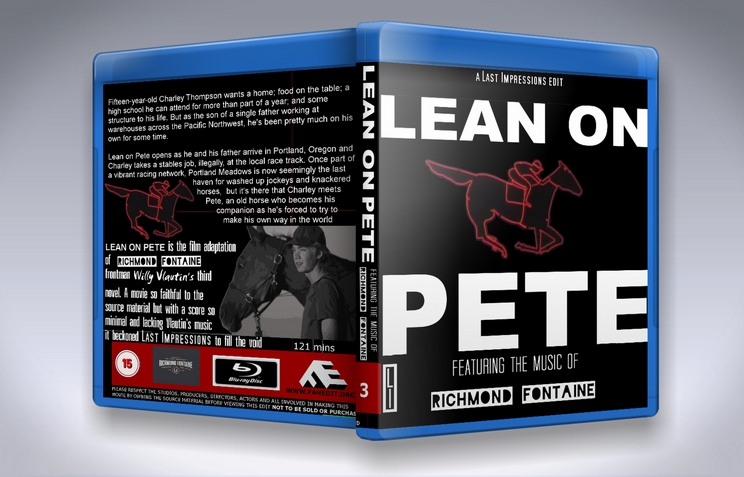