Brief Synopsis:
Aping the style of early cinema, this fanmix is intended to be a short film with a mix of humour, sincerity and subversion. The focus is shifted entirely off the traditional protagonists of a superman film and instead onto the US military and how they deal with these events. The filmis presented like a B movie and intends to enhance the military's mistrust of the alien and the reporter. There is also emphasis on explosions by adding in very selective colour.
Intention:
I was noticing how the US military plays a big part in some movies where they don't really contribute to the main story but rather form their own subplot running alongside the main movie. my immediate response is to cut out as much of that as I can, but I then thought, what if I do the opposite?
The result started to feel like those old B movies I used to watch so I leaned into it and got creative.
Other Sources:
warner bros logo https://www.youtube.com/watch?v=BtadMDtf_g0
folk music https://www.youtube.com/watch?v=fuBsVD3KuhU
riders on the storm https://www.youtube.com/watch?v=GLpu266uczE
Special Thanks:
Gieferg
Release Information:
Digital
Editing Details:
to get the classic look, it was important to enhance the contrast as well as desaturate it. of course, the filmic filter also helped greatly. I also reduced the camera shake by a large degree, but not entirely. This makes it look less like handheld, but not as stable as later films.
Cuts and Additions:
cuts are too extensive to list, I'll list what I kept.
*scene in bar where soldiers talk about Ellesmere island, majority of Clarke shots cut or reframed to focus on other elements.
*Ellesmere island scene, cut some of Lois' lines to make us favour Colonel Nathan Hardy, removed Lois going into ship.
*scene of General Swanwick in bunker, there is a ship approaching
*scene of Lois Lane at home, cut short just to emphasise her taken into custody
*superman arrives at army base, removed most of his conversation with Lois and edited conversation to make him seem aloof
*Faora Ul arrives and mostly ignores superman, wants to abduct Lois Lane.
*almost as soon as they leave, General Swanwick observes a bogey headed towards Smallville Kansas, orders forces to intervene
*US forces arrive at Smallville to find superman already there fighting the other aliens.
*Smallville scene minimises superman and emphasises military action, the end features Col. Hardy deciding to trust him
*General Swanwick observes the big ship split in two and they ascertain it is terraforming
*they get an offer of help from the apparently rescued Lois Lane and superman, they accept.
*Superman disappears to the Indian ocean, the US forces carry the 'payload' to the ship in new york and save the day.
*superman rescues Lois Lane but neglects to save Colonel Hardy and his colleagues.
*Superman destroys a US drone and challenges General Swanwick, but they make an uneasy truce.
Cover art by tremault (DOWNLOAD HERE) 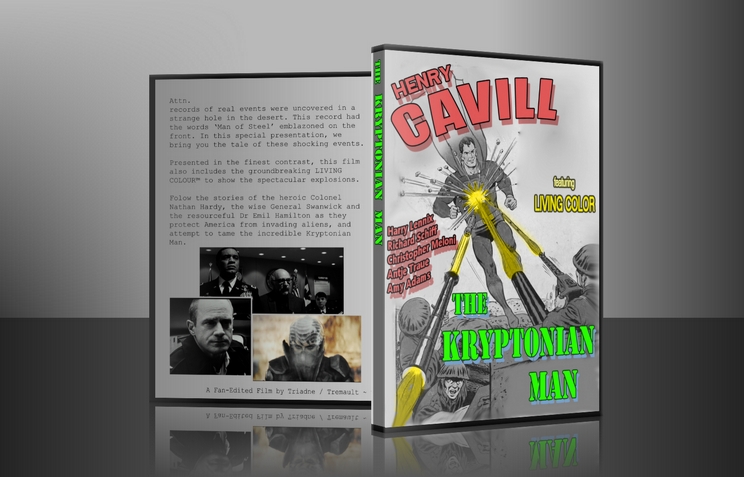