Indiana Jones and the Kingdom of the Crystal Skull: Recut by 15MaF

Brief Synopsis:
Spoilers of course. Though usually people come here knowing the score.
This edit aims to eradicate the paternal cause of some questionable narrative that essentially removed the viewer from the fantasy of adventure and also other complaints I had with the level of schlock falling lower than was necessary. It also aims to strike a balance for those that didn’t mind or could live with certain things like cgi bugs or iconic atomic silhouettes... Cutting the best part of twenty minutes was as far as I’d like to go to try to keep a feature length feel. There be aliens ahead, but differently presented...
Intention:
I couldn't help but admire the work of the crew to make this film look and feel like Indiana Jones despite it's narrative goofs. The indy-isms were sometimes overly done, but often were just lovely (Indiana putting on his hat at the begining). The camera work alone helps it feel like an Indy film. Director of photography Janusz Kaminski wanted to honor the work of cinematographer Douglas Slocombe on the first three films and I think he did. Enough for me to keep trying to like the film.
Other Sources:
- The Indiana Jones Trilogy Original Soundtrack.
- 1080p footage I shot of the sun.
- Footage of Nixie tubes (https://www.youtube.com/watch?v=-ybwbUUH870)
- Cymatic patterns (https://www.youtube.com/watch?v=vN-n3Q9d6Q8)
- Explosion footage (https://www.youtube.com/watch?v=rv9E4aFasBU)
- Om chanting (https://www.youtube.com/watch?v=SBiwLibZqfw)
- Stock smoke footage (https://www.youtube.com/watch?v=66B_nNHaQho) 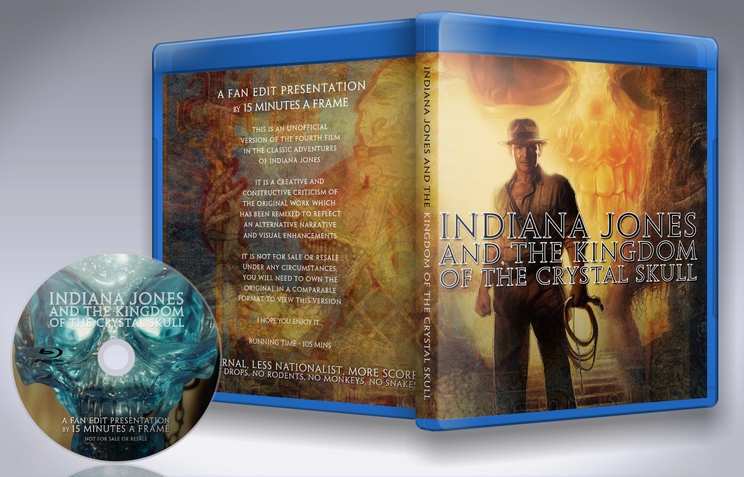 I do understand the reasons why this edit exists. The original was just damn lame, and corny. So much old man humor and cheese. It's very much a bad-idea-a-minute type movie. It feels like a movie made by old men tryna be hip, exciting and funny. I get it. And I did like this movie when I was younger. It was the film that got me into Indiana Jones, and movies in general. And while I do have nostalgic ties to it, I understand the badness of it.

However. Say what you will abt the original's badness and lameness, but it was well-structured. There is some excess, which this recut addressed, and rightfully so. But generally the film, even with all its lameness, was well-structured. The scenes were well-edited, the pacing was good, the scenes had flow. The film had a lot of bad ideas, yes, but the basic editing, pacing, and flow were good, outside of the ideas in the narrative.

Which is why I dislike this recut. In trying to remove much of the bad and excessive ideas in the original (at least in how I interpret the intention behind it), the film's flow and pacing suffers drastically as a result. Scenes no longer flow with the smooth music that a Spielberg film always has. I watched this recut first before I rewatched Crystal Skull for the first time in many years. Which means I watched this edit without seeing the original in a long time. And still I could tell when something that's supposed to be there, has been removed, and the flow of the editing is ruined as a result. Which frankly is all the time.

While I do not love the original, seeing what it truly is now as an adult, I am sorry to say this edit is almost as unenjoyable to watch as the original, although for a different reason. While the original is bad because of its many bad ideas, this edit is bad because although the bad ideas are no longer there, the structure, flow, and music that was in it is ruined. Too many times I find abrupt, awkward cuts that stick out way too much like giant scar. This edit is the equivalent of cutting out too much and leaving too many blank spots and holes. Besides, although excessive, a lot of the stuff cut in this edit are scenes with heart. The lighthearted aspect of the film is foregone in favor of thrilling action and straightforward narrative. Which in theory is fine, but the original was very much a lighthearted film. It had that charm. This edit, in cutting out too much, also cuts away the heart of the film, which although makes the film much more exciting, takes away much of identity and spirit.

On a more positive note, the audio editing is good. Never noticed a problem. The visual quality is good as well.

Overall, sad to say, I can only recommend this movie to a viewer, if said viewer had no eye for pacing and flow for film whatsoever. Although I do admit that a movie's flow is a VERY big deal for me, so take my complaints please with a big grain of salt. At least I could potentially enjoy the original in all its lameness, even if I have to turn my brain off when I do, because the original had good flow and heart. On the other hand, I personally cannot sit through this edit in all its way-too-straightforward and cold choppiness.

It feels like listening to a corny love song keeps skipping forward. Although the original song was lame and corny, it had rhythm and heart. The cuts take that away, leaving behind a cold, choppy mess that doesn't quite feel like music. 4.5/10.

Do you recommend this edit?
No
Format Watched?
Digital
J
johnfransen Top 500 Reviewer 5 reviews
Report this review Comments (1) | Was this review helpful? 0 2
July 26, 2021
Overall rating
9.3
Audio/Video Quality
10.0
Visual Editing
10.0
Audio Editing
10.0
Narrative
9.0
Enjoyment
9.0
Very nice work here. I am a huge Indy fan, but Crystal Skull is just not good. I don't hate it like most, but don't love it either. Too much silliness and this gets rid of a good chunk of that. It's still not a great movie, but much improved. This is now the version that holds a spot in my Indy collection.

Format Watched?
Digital
B
bailey Top 100 Reviewer 43 reviews
Report this review Comments (1) | Was this review helpful? 0 0
May 04, 2021
Overall rating
9.8
Audio/Video Quality
9.0
Visual Editing
10.0
Audio Editing
9.0
Narrative
10.0
Enjoyment
10.0
A brilliant edit by 15MaF that was bloody brilliant to watch. Really improved on the theatrical version from what I could remember watching it such as cutting some of the silly or overuse of CGI moments like mutt's winging with the monkeys, him getting hit in the groin multiple times during the sword fight and the decapitation of Marcus's statue. There were some audio cuts I did notice but overall my enjoyment of the movie has certainly increased from what I remember of the original version.

Do you recommend this edit?
Yes
Format Watched?
Digital
E
el-marv Top 100 Reviewer 31 reviews
Report this review Comments (0) | Was this review helpful? 0 0
February 06, 2021
Overall rating
9.4
Audio/Video Quality
10.0
Visual Editing
10.0
Audio Editing
9.0
Narrative
10.0
Enjoyment
9.0
This edit was impressively well done. Cutting the small excess scenes with terrible dialogues thankfully gives the movie a serious tone. More notably, the terrible monkeys and gopher CGI scenes were removed. The additional effects of this edit were pretty good. I found a few noticeable audio cuts but if might be me just recognizing the score but I'm sure a new viewer wouldn't recognize it. The pacing of the film feels perfect almost as close to Temple of Doom or Raiders so I will give it a recommendation to a fan who barely watches the original version.

Do you recommend this edit?
Yes
Format Watched?
Digital
K
kaede5108 Top 500 Reviewer 13 reviews
Report this review Comments (0) | Was this review helpful? 0 0
December 07, 2020
Overall rating
7.7
Audio/Video Quality
9.0
Visual Editing
9.0
Audio Editing
8.0
Narrative
8.0
Enjoyment
7.0
15mf accomplishes the goal of fixing and improving the movie into a decent movie but goes beyond in editing some of the effects such as changing the paramount logo in beginning to make it more faithful to the previous movies which looks better than even some of the obvious green-screen effects in the movie. A worthy replacement of the original movie? Of course but as good as the original trilogy? unfortunately no but it does make a lot of references to it's predecessors so it is best to treat it as something of throwback/reunion kind of movie with a cool homage to 1950's sci-fi which is fitting to the trilogy since each movies do have different motifs in each adventures. There is some very choppy scenes and awkward-looking shots due to the excessive editing which is justified but has a few quiet pauses in a few scenes and one scenes where Marion scream is abruptly cut short instead of fading out.
While the original movie fails as a worthy follow-up where this one succeeds at it.