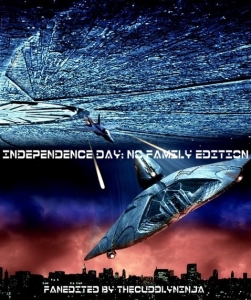 Join the Forum Discussion
Tweet
Brief Synopsis:
Will Smith has no wife and son. The president has no wife. Some silly moments with Goldblum and his ex are cut. Randy Quaid has no family. The movie has no Randy Quaid.
Intention:
I love the late 90s cheese and action in Independence Day but the movie should definitely not be two and a half hours. A lot of scenes with Vivica Fox and the First Lady drag in the middle of good action set pieces. The movie grinds to a halt every time Randy Quaid says a "joke." I wanted to focus on the characters core to the story and remove the bloat.
Other Sources:
Independence Day OST
Special Thanks:
fanedit.org community
Release Information
Editing Details:
My approach was to completely remove the family subplots that slowed down the story in my opinion. All Vivica Fox and her son, the First Lady, Randy Quaid's alcoholism and abduction story (all of Randy Quaid, actually), Randy Quaid's family and some of the stuff with Goldblum and his ex (the night they get drunk, mostly).
Cuts and Additions:
Cut president talking to wife on phone
Cut president and advisor talking about campaign before SOD calls
Cut David’s (Jeff Goldblum) line about Styrofoam cups
Cut Imperial Valley scene with Russell (Randy Quaid) and his kids
Cut White House Communications Director talking before going in and seeing the president
Cut “there’s no shame in hiding” and “I’ve got to call my mother”
Cut Russell diner scene
Cut Russell’s family out of the sequence where the disc ships move into place
Cut Steven (Will Smith)/Vivica Fox talking about the aliens
Cut Steven/Vivica Fox goodbye scene
Cut scene of president talking to wife on the phone
Cut 1st scene of David and his dad in the car
Cut scene of Russell’s kids watching him on tv
Cut Russell Case scene
Cut Steven talking about his girlfriend to fellow soldier
Cut Vivica Fox strip club scene
Cut “yeah…all cable men can, pops” since I cut the scene where he gives him crap for being a cable repair man
Cut dialogue about David punching president last time he saw him – not that relevant, safe to assume president is standoffish because he’s in a crisis and that’s the ex-husband of his trusted advisor
Cut president’s wife getting evacuated
Cut Vivica Fox scene in her car
Cut David’s boss trying to call his therapist in the Hamptons
Trimmed some of Vivica Fox’s stripper friend on the roof so she’s not a focus
Cut Steven’s wife, dog and son running from the fire
Cut scene with Russell and his family in the camper driving
Cut scene with President in the plane
Cut Vivica Fox and son in the aftermath
Cut Vivica Fox finding a car
Cut David’s dad talking to his ex-wife on plane
Trimmed scientist dialogue about not getting out much
Cut scientist “freakshow” line and trimmed his “humor” a bit
Cut White House staff squabbling over Area 51 existence
Cut Steven asking about El Toro
Cut Vivica and co by the fire
Cut “let’s nuke the bastards” line – stronger if president just says “nuke ‘em” and the scene ends
Cut scene of David and ex drinking on plane
Cut Steven stealing chopper and reuniting with wife
Cut president talking to his dying wife in hospital
Cut David drunk and his dad talking to him about faith
Cut Steven’s family out of Area 51
Cut “I gave it a cold” line since I cut David drunkenly figuring out the virus plan from his dad talking about a cold
Cut SOD referencing President’s dead wife
Cut Russell at Area 51 talking about his desire for revenge
Cut David’s ex not wanting him to go up
Cut Steven’s wedding
Cut Russell’s family during the president’s speech (left Randy in the first shot of group and shot at end because there are a bunch of random pilots)
Cut Russell saying goodbye to family
Cut Steven saying goodbye to family
Cut most of David and his dad saying goodbye
Left some shots of Russell piloting, since they focused on the president and another random pilot, too. I cut his over the top line about revenge, though. It doesn’t feel like “who the hell is that guy” just that they’re following the president and a couple of pilots they showed during his speech
Cut David’s dad leading prayer with disgraced ex-SOD
Cut all shots of Vivica Fox after ship is blown up
Cut celebration so that movie ends with David and Steven walking up and being picked up (no family celebrations)
Cover art by The Cuddly Ninja (DOWNLOAD HERE) 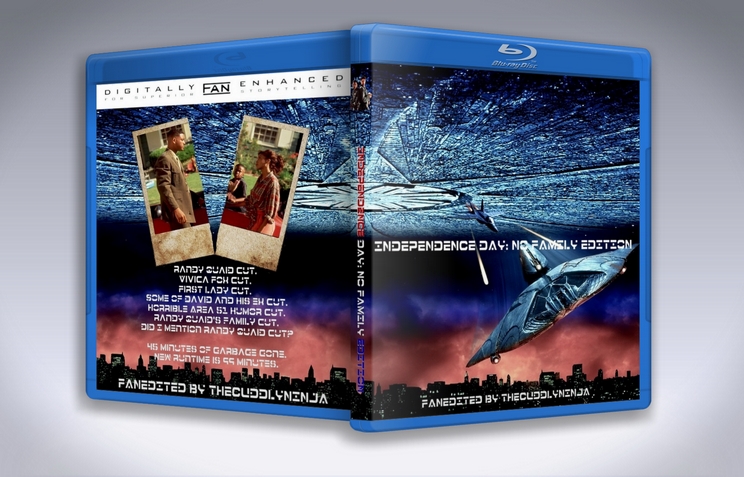 Ah, the cheesy, '90s time capsule that is Roland Emmerich's Independence Day. I know it's ludicrous, stupid and cliche but I still love this movie for it's upbeat/fun atmosphere that's celebrated throughout. That said, there are instances of pointless scenes and characters, as well as moments that just drag down the movie in 180 degree somber tone. For anyone who agrees with me on this, thecuddlyninja's edit deals with all of those problems, giving us the un interrupted theme park ride we all wanted. Overall, the source file works pretty well aside from occasional artifacting say in the background, though thankfully it never ruins the quality or detail. Visual editing is smooth and seamless as it should, as if it were always that way. Audio editing overall is good, albeit several small cases of abruptness or sfx/music bleeding into the next scene. It's not a deal breaker, because again the goal here is achieved and is a very good example of how a proper ID4 edit should be like.

This is the movie I wanted to see in the cinema 1996. The edit has focus. No more unnecessary characters or storylines that are either stupid or not interesting. Or just annoying. The pace and rhythm are great. Also the tone is more serious in a way that is right for the film. I enjoyed this edit a lot. Only thing that didn't work perfectly is the destruction of the Area 51 ship in the end of the movie. You can see that something has been cut out, but it's still far better than the original version. Well done!

A classic popcorn movie just got popcornier. This edit moves along at a good pace and ends neither late nor early, but precisely when thecuddlyninja means it to. The removal of Vivica Fox seriously dialed down the babe quotient (or the fox quotient), but this was balanced by the joyous near-removal of Randy Quaid, making those two cuts a karmic wash.

The picture quality is generally good, but there are some minor visual issues: the black levels of the title cards don't quite match the black levels that immediately follow. Also, the custom titles look pixelated and videogamey, but then again, the whole movie is videogamey and these titles are a small fraction of the edit, so again, no fatwah.

Listen up, mofos—this is a fun edit. I look forward to other works by this faneditor. Or else. . . fatwah.

This was a really enjoyable fanedit. I mean sure, there's a lot of great character building moments that have been sacrificed, but this doesn't really need them. What remains is a wonderful action-packed popcorn movie.

Editing was great, only a couple cuts that felt a little abrupt. I will say though, you should have cut Russell in the final fight. I mean, I understand you can't see his face, but it's such a distinct voice that I said, "Oh cool, the random hobo that gave Will Smith a ride to Area 51 was recruited to fly a fighter jet."

Recommended for anybody wanting to rewatch ID4 or just looking for a fun action movie.

Thanks for watching! I'm happy that you enjoyed it. I didn't miss much of the character stuff, either.

I actually originally experimented with removing Russell completely but what I found was that it felt weird focusing only on the President and the other random pilot guy in the battle for Earth,e ssentially. I then trimmed some of the random pilot guy and was left with too much focus on just the President (in my opinion). I decided the lesser of two (or three) evils was to have all the pilots in the mix, and hope that you would forget hearing Randy Quaid's distinctive voice for the one line earlier. :)